Ron Faucheux, Ph.D. authored the book Running for Office and has taught courses in presidential elections at George Washington University. A nonpartisan political analyst, he publishes the LunchtimePolitics.com newsletter. 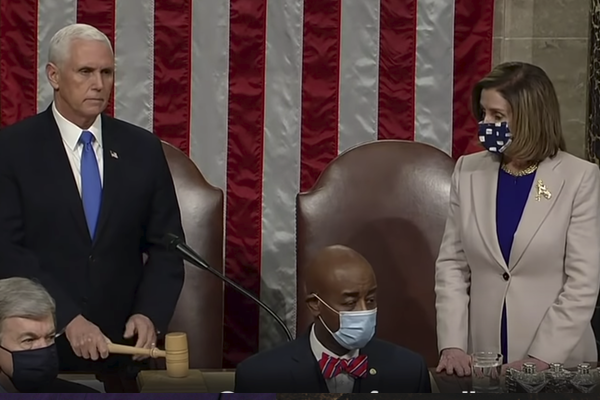 Americans are accustomed to submissive vice presidents. Recent occupants of the office have been careful to avoid public fights with their bosses. Disagreements were swept under the Oval Office rug.
That’s why discord between Mike Pence and Donald Trump is so remarkable. Vice presidents don’t often discuss, even in private, the forcible removal from office of their commanders-in-chief.
Throughout history, however, America’s top two elected officials haven’t always gotten along.
The nation’s second vice president, Thomas Jefferson, defeated President John Adams for re-election after a vicious campaign in 1800. Aaron Burr, who ran for vice-president with Jefferson that year, secretly tried to get the Electoral College to elect him president instead. Four years later, Jefferson barred Burr from the ticket and later ordered his arrest as a traitor.
John C. Calhoun was a curious vice president. He held the job under two presidents who were mortal enemies, John Quincy Adams and Andrew Jackson. Calhoun, who led the fight to allow states to nullify federal laws within their borders, battled Jackson on this critical issue. Calhoun resigned the vice presidency at the end of the term to take a Senate seat where he could, once again, be his own man.
In 1860, Maine senator Hannibal Hamlin was put on the Republican ticket to geographically balance Abraham Lincoln’s candidacy. In those days, the vice presidency was viewed as part of the legislative, rather than the executive, branch. Throughout the Civil War, Vice President Hamlin rarely met with Lincoln. He did, however, report for military duty during the last year of the war, serving as a guard and company cook before being promoted to corporal.
Hamlin was dumped from the Republican ticket in 1864. Democrat Andrew Johnson was picked as Lincoln’s running mate to unify pro-union voters from both parties. Johnson’s first act as vice-president was to show up drunk at the inauguration, embarrassing onlookers, especially Lincoln. Johnson would meet with his new boss only once during his short VP tenure, and that was the day Lincoln was assassinated.
Calvin Coolidge detested his vice president, Charles G. Dawes, who refused to attend cabinet meetings, sometimes disagreed with the president’s legislative agenda and was caught napping at a nearby hotel when he could have broken a Senate tie vote on a Supreme Court confirmation. Dawes is less known for his vice-presidential service than for composing the melody to the song It’s All in the Game. He was the only vice president to have a number one pop hit on the Billboard chart.
Franklin Roosevelt’s selection of John Nance Garner as his vice president had nothing to do with affinity. It was the result a raw political deal: Garner’s delegates were delivered to FDR in return for a place on the 1932 Democratic ticket. In office, Garner privately disagreed with Roosevelt’s policies and even opposed giving his boss a third term.
In 1960, Lyndon Johnson accepted the vice-presidential nomination when John Kennedy offered it despite his lack of respect for the job. Though LBJ and JFK had cordial relations, mutual suspicion constrained their alliance. When Kennedy was assassinated, Johnson became the eighth vice president to move up due to a presidential death.
Johnson didn’t seek a second full term in 1968, and his vice president, Hubert Humphrey, jumped into the presidential race. Humphrey’s perceived subservience to LBJ on Vietnam war policy complicated his path to the White House. He struggled to distance himself from Johnson while maintaining allegiance. It was a kabuki dance that didn’t work. Richard Nixon, who also understood the risks and rewards of vice-presidential loyalty, beat him.
It wouldn’t be the last time an ambitious vice president had to zig zag in and out of a presidential shadow.
Mike Pence was not an early supporter of Donald Trump. He endorsed Texas Sen. Ted Cruz for the 2016 nomination. But once Trump selected Pence to be his running mate, he fell in line. The effort to overturn the 2020 presidential election, however, was a bridge too far for this self-proclaimed “principled conservative” to cross.
As the Trump administration comes to an end, Vice President Pence is paddling his own boat. Where he goes is now up to him––and him alone.
comments powered by Disqus