Alicia K. Jackson is a professor of history at Covenant College in Lookout Mountain, Georgia. 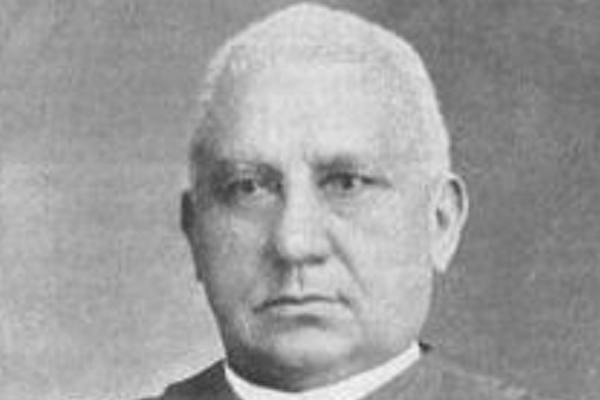 Rev. Henry McNeal Turner, who represented the Macon area in the Georgia House of Representatives as a Republican after the Civil War

For anyone living in Georgia, the tensions of the current political season have been enduring and intense, especially in the past six months.  Stuffed mailboxes have spewed a deluge of vibrant political flyers, and for anyone with a newspaper, radio, television, or internet account living within twenty-miles of the state’s line, the barrage of political ads have seemed endless.  Many Black Americans have experienced additional tensions in this current political season through the communication driving the campaigns of incumbent Senators Kelly Loeffler and David Perdue against challengers Jon Ossoff and Raphael Warnock.  Historic stereotypes that were first standardized during Reconstruction have resurfaced.  After the Civil War, Black men throughout the nation embraced freedoms embodied by Emancipation and voted, but specific stereotypes became common in the communication of whites and effectively cast them as lawless, violent individuals, and Black political leaders as “radicals.”

While political ads sponsored by the Perdue and Loeffler campaigns and conservative PACS against Jon Ossoff have emphasized his support for “criminal illegals” and described him as a “leftist liberal,” many ads against Raphael Warnock have cast him as a “radical.”  Warnock is the pastor of Ebenezer Baptist which is an emblem of the modern Civil Rights struggle and remembered as the home Church of Martin Luther King, Jr.  His activism follows in the longstanding tradition of Black Protestant leaders like Richard Allen, Soujourner Truth, and Martin Delany, but for many white conservatives, Warnock challenges their well-worn stereotype of the “obedient, faithful negro” that was codified and romanticized by Lost Cause enthusiasts.  In a December 6th debate, Kelly Loeffler replayed a historic stereotype harbored by many conservative whites by calling Warnock a “radical liberal” no less than thirteen times.  Other ads employed in her campaign cast him as “anti-police” and were often interspersed with images of a bleary-eyed Warnock surrounded by scenes of chaos in America.  These images and the terminology behind them revived long standing tropes that were carefully curated to convince white conservatives that a Warnock victory would usher in the lawlessness and violence that was stereotypical of Black leadership in many of their minds.

During Reconstruction, the term “radical” truly came into its own.  For many in the South during this period, the Republicans were the Party of Lincoln and formerly enslaved Blacks, and “Radical Republican” was an epithet synonymous with corrupt  Jacobins and extremists.  “Radicals” were white Republicans who wanted to extend rights and protections to newly-freed Blacks, and historian Allan G. Bogue explores the development and usage of this term.  Virtually any Black politicians vying for office was also labeled a “Radical” because of the mere fact of their involvement in political activity, and consequently, only one Black individual served briefly in the House of Representatives while only a few dozen were elected to state legislatures during the period.

Reverend Warnock embodies history in that many Black leaders in Georgia who ran for political office were ministers and were often cast by their opponents as “radicals”.  Many became targets of violence and threats.  During Reconstruction, Henry McNeal Turner, who was an African Methodist Episcopal minister, and Tunis Campbell, an African Methodist Episcopal, Zion, elder, emerged as two of the most well-known Black politicians in Georgia.  As Stacey Abrams, who is an active member of the United Methodist church, did in 2020, both men made the most of grassroots efforts and local organizing in 1868, and their efforts were distinctly tied to their church involvement and community leadership.

Turner and Campbell were continually described as “radicals”, and both men consequently faced strong challenges to their leadership, most notably from individuals tied to the Ku Klux Klan which emerged in Georgia just as Blacks were gaining access to the vote.  Established in Pulaski, Tennessee, the KKK maintained a foothold in Georgia as voters decided on the state’s new state constitution, legislative offices, and representation in Congress in the spring of 1868.  Confederate General J.B. Gordon, who was reportedly the leader of the Georgia branch of the Klan, was one of the candidates for state office that year, and while he lost the gubernatorial election, fellow Confederate Nathan Bedford Forrest, who was the first Grand Wizard of the Klan, campaigned on his behalf.  Gordon eventually served as a Senator and Governor of Georgia, and the state eventually was recognized as the birthplace of the second Ku Klux Klan, which was reborn in 1915 in partial response to the rising immigrant population of the early 20th century.  Following the release of Birth of a Nation and the mob lynching of Leo Frank, a Jewish factory manager who was falsely accused of murdering a thirteen-year-old employee named Mary Phagan, the Klan was reborn less than 30 miles northeast of Atlanta in Stone Mountain, Georgia.

Days before the January 5th runoff election, Jon Ossoff accused Kelly Loeffler of campaigning with a Klansman, which Loeffler flatly denied.  Yet, Ossoff,  as reported in Politico, continued his claim that Loeffler had campaigned “with a former member of the Ku Klux Klan.”  The idea of a high-profile white politician being connected to the Klan most likely was a clarion call for many Black Georgians as to the need for high African American turnout, and in some counties, voter turnout was higher in the January run-off election than in the presidential election in November.

Ossoff’s accusation creates a connection to the dark period of Georgia’s Reconstruction, and the dark but historic tropes employed by Loeffler and Perdue to undermine Warnock’s leadership further intensify this connection.  These connections also intensify the historic nature of Warnock’s victory as the first Black U.S. Senator from Georgia and only the sixth African American to win a statewide election in the state’s history.  Moreover, the significance of Ossoff’s win should not be overlooked.  Ossoff, who is the son of a Jewish immigrant, becomes the first Jewish Senator from Georgia.