The End of an Era? Athens After Empire

Ian Worthington is Professor of Ancient History of Macquarie University (Aus) and the author of Athens After Empire: A History from Alexander the Great to the Emperor Hadrian (Oxford University Press, 2020). 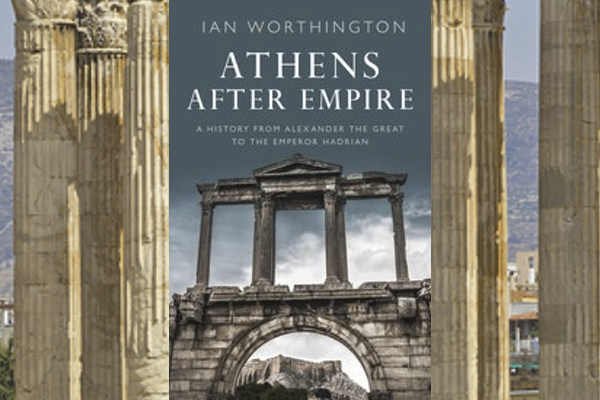 Athens: the most powerful city in ancient Greece; the birthplace of democracy; home to the great tragedies of Aeschylus. Sophocles, and Euripides; philosophers such as Socrates, Plato, and Aristotle; brimming with large monuments and temples; people packing into the Agora to do business and discuss current affairs; life there anchored in freedom and autonomy; a great imperial power. This is the Classical-era city that resonates with us the most when we think back to ancient Greece.

But what was Athens like after the Classical period? Alexander the Great’s father Philip II had imposed Macedonian rule over Greece in 338 when he defeated a coalition Greek army at Chaeronea (in Boeotia). That rule continued for almost two centuries until Macedonia fell to the new power of the Mediterranean, Rome, which made Greece part of its empire in 146 (dates are BC). Commonly called the “Hellenistic” period, from Alexander’s death in 323 to Rome’s conquest of Egypt in 30 (which gave Rome mastery of the entire Mediterranean), Hellenistic Athens is normally viewed as a sad relative of its Classical self – subjected to outside rule; its democracy curtailed; its military next to nothing; its economy shattered; its population cowed; its intellectual and cultural life stifled; even aspects of its culture appropriated by the Romans for their own needs.

That dreary picture of decline and fall is wrong.

It’s wrong, as I show in my Athens After Empire, because of the chronological parameters imposed on “Hellenistic” Athens. The problem with periodization – breaking up a long historical period into a series of distinct smaller ones – is that it does not follow that the beginning and end points of these smaller stages are right. Scholars commonly divide Greek history into three broad eras: Archaic (750-478), Classical (478-323), and Hellenistic (323-30). Yet these dates are arbitrary – why, for example, should the Persian Wars (490-478) end the Archaic period, when they heralded a new era of warfare, not to mention political, social, and cultural changes throughout Greece, rather than start the Classical? After all, the Greeks did not have these terms and they thought about history differently.

The term “Hellenistic” was devised in 1836 by the German historian Johann Gustav Droysen, who saw the three centuries after Alexander the Great’s death (323) to Roman rule in the east (30) characterized by the spread of Greek language and culture there (thanks to Alexander’s conquests) – Hellenism. Yes, there was this spread as Alexander’s campaign in the Asia opened up new social, cultural, and economic contacts as never before. But this terminal date implies that history somehow ended then for all concerned. It did not, nor did the spread stop.

Within this “Hellenistic period” there were multiple independent kingdoms and areas going about their daily business, interacting and going to war with each other until Roman imperialism put an end to that. Yet the Romans conquered each of those places and made them become parts of their empire at different times – Greece in 146, for example, the Seleucid Empire (Syria) in 63, and Egypt in 30 when Cleopatra VII’s suicide ended the last Hellenistic dynasty, Ptolemaic Egypt.

The year 30, then, was a significant one for Rome – and Egypt for that matter – as it could now boast mastery over east and west. But what about Greece, especially its leading city Athens, which in 30 had been in the Roman Empire for over a century? After the battle of Actium in 31, when the Roman admiral Agrippa defeated Antony and Cleopatra, Octavian (later Augustus) visited Athens. He was now ruler of the Roman world. He brought gifts of needed grain to the city and Greeks and made peace with them.

Yet the only novelty stemming from Actium was a new Roman master, another in a line that went back to the likes of Julius Caesar and more recently Mark Antony (who had twice lived in Athens). Octavian foisted no new constitution on Athens, no new taxes, no new anything affecting daily life. His actions also followed a trend, for Caesar had forgiven the Athenians for their support of Pompey, as had Antony for their support of Brutus after Caesar’s assassination, and like Caesar Octavian had bestowed gifts on the city.

It is hard to imagine, then, that the Athenians (or the Greeks) would have seen Octavian’s actions, and a year later Egypt’s fall to Rome, as being the end of an era for them. Why? Because there was minimal change but maximum continuity. It is that continuity that makes me challenge the accepted terminal date of 30 for “Hellenistic” Athens and to take it an entire century later to the emperor Hadrian in AD 132. In the process I show the pitfalls of periodization and bring Athens out of the shadow of its more famous predecessor.

Why Hadrian? Throughout the collapse of the Roman Republic and first century of the emperors Athens was still the dominant city in Greece. It remained a cultural and intellectual center, among other things for philosophy and rhetoric, attracting Romans to visit and study there. In AD 132 Hadrian drew on Athens’ cultural standing to make it the center of a new league of Greek cities in the east he had fashioned called the Panhellenion.

In doing so, he catapulted Athens to prominence again in the Greek world. He had also constructed a number of monuments in the city (his magnificent Library, for example) and finished – after centuries – the massive temple of Olympian Zeus close to the Acropolis. And in that same year (AD 132) the Athenians erected an Arch to him (which is still standing, adjacent to the temple of Olympian Zeus), inscribing on its west side: “This is Athens, the ancient city of Theseus,” and on its east: “This is the city of Hadrian, and not of Theseus” (the city’s legendary founder).

When, however, we assess Athens from fall thanks to Philip II of Macedonia to rise again thanks to Hadrian as a single time frame, as I do for the first time, we see how the city is far from being a mere postscript as commonly held. Aside from its continuing diplomatic and cultural history is an even stronger pattern not appreciated by ending its “Hellenistic” history in 30: the people’s resilience – by extension serving as a lesson for their own time and for us when oppressed. Athenians fought their Macedonian masters when they could, no matter the odds, and sided with foreign rulers against Rome, in the hope of regaining freedom and restoring democracy. They were subjected to Macedonian garrisons in the port of Piraeus and in the city itself, and under Rome were forced to share the Acropolis, the sacred home of their patron deity Athena, with the goddess Roma as part of an imperial cult.

Ending the city’s history in 30 does not bring out how the people’s resilience was a defining feature of their history under Macedonia and Rome. In the 80s they sided with Mithridates VI of Pontus (Black Sea) against Rome, suffering terrible losses in 86 when the Roman general Sulla sacked the city. But the people did not quietly fall away into subservience as ending hellenistic history in 30 suggests. In 21 for example, ahead of a visit from Augustus, they defiantly daubed Athena’s statue with blood and turned it to face westward: even the goddess it seems was spitting on Rome!

Throughout the five centuries from Philip II to Hadrian, Athens carefully navigated masters to retain its own identity even as it appeared to transform into a Roman provincial city. One inscription on Hadrian’s Arch might well say Athens was no longer Theseus’ but Hadrian’s city, but the other one tellingly states that it’s still Theseus’ after all. And then came the Panhellenion, which turned Athens into the second city of the Roman Empire. Likewise, its – and Greek – cultural and intellectual life seduced Romans; as the Roman poet Horace put it: “Captive Greece captured her rude conqueror.” We do not appreciate this history if we end it too early.

“Hellenistic” Athens may not shine as brightly as Classical Athens, but it has lived unfairly in the shadow of its famous predecessor. It’s time it emerged from that shadow.