Brian Glyn Williams is Professor of Islamic History at the University of Massachusetts-Dartmouth and author of Counter Jihad: America's Military Experience in Afghanistan, Iraq, and Syria. 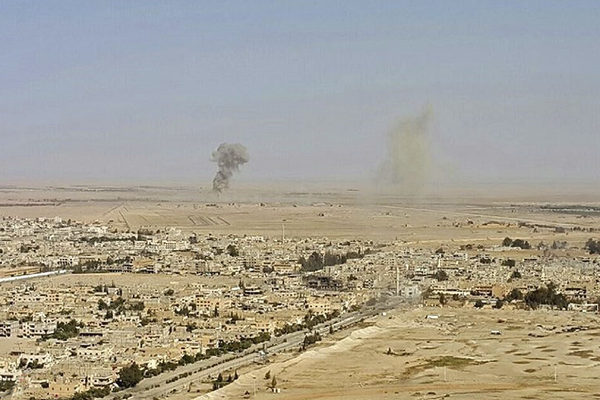 Bold Claims of Victory Over ISIS

During the recent vice presidential debate between Mike Pence and Kamala Harris, Vice President Pence made a bold comment on Trump’s role in defeating the Islamic State in Iraq and Syria. This has been a major bragging point for the administration. Pence boasted

Trump has on numerous other occasions has taken credit for defeating the Islamic State. In his February 2019 State of the Union address, for example, he bragged “When I took office, ISIS controlled more than 20,000 square miles in Iraq and Syria. Today, we have liberated virtually all of that territory from the grip of these bloodthirsty killers.”

Trump’s statements were not only crafted to take credit for the victory over ISIS, they have been crafted to diminish his predecessor Barack Obama’s victories. Trump, for example, said nine months into his presidency in October 2017, “we’ve done more against ISIS in nine months than the previous administration has done during its whole administration — by far, by far.” In March 2018, Trump would make the maximalist statement “on terrorism, in Iraq and Syria, we’ve taken back almost 100 percent, in a very short period of time, of the land that they took. And it all took place since our election.”

But are Trump and Pence’s claims to sole credit accurate or are they mere campaign braggadocio?

I am a scholar who formerly worked for the CIA’s Counter Terrorism Center and U.S. Army’s Information Operations team in Afghanistan. I track and write map-based reports on the Islamic State group and its affiliates. I pay careful attention to where the group has been defeated and is still active and holds territory as part of a University of Massachusetts-Dartmouth project I lead called MappingISIS.com In addition I have published a book on America’s war on ISIS and numerous articles. Data I have collected – including from official reports issued by the State Department, the Global Anti-ISIS Coalition, the Pentagon, IHS Conflict Monitor, a think tank that provides data on wars, and other think tanks – show that the president’s claims are false: the Trump administration inherited a war from Obama in 2017 that was by all metrics successful in “degrading and destroying” the Islamic State Caliphate of theocracy on every front by the time he became Commander in Chief.

A Caliphate in Retreat Under Obama

The “light footprint” war against ISIS known as Operation Inherent Resolve was launched by Obama in 2014 and was criticized by Republicans because the president chose an unconventional proxy approach to war. This approach leveraged local Kurdish fighters and Iraqi soldiers to fight to achieve America’s goals instead of a 2003-11 Iraq War “Shock and Awe” style conventional “big war” with US troops in the vanguard doing the fighting and dying. Despite widespread criticism from Republicans, Obama’s unconventional proxy approach worked and, according to Pentagon, State Department, think tanks, Anti-ISIS Coalition and other sources, the campaign achieved tremendous success on all fronts by the time Trump took office in January 2017.

The US envoy to the anti-ISIS Coalition Brett McGurk, for example, stated a month before Trump took office, “in early 2016 . . . about 50 percent of the [Islamic State] territory had been cleared.” The Global Anti-ISIS Coalition similarly reported “by November 2016 [two months before Trump took office] Islamic State had lost 62 per cent of its mid-2014 ‘peak’ territory in Iraq, and 30 per cent in Syria.” In addition, the  widely respected British think tank IHS Markit reportedthat by the final months of Obama’s presidency, ISIS territory in Iraq had shrunk from 40 percent of the country to just 10 percent. Pentagon and State Department maps of the war on ISIS from this period further demonstrate that in the two and half years the war was fought under Obama the Islamic State lost its only international border to the world (its strategic resupply border with Turkey) and vast swathes of territory. They clearly show that approximately half of the Islamic State’s territory had been liberated by the time Obama left office. See State Department and Pentagon maps from late 2016 below: 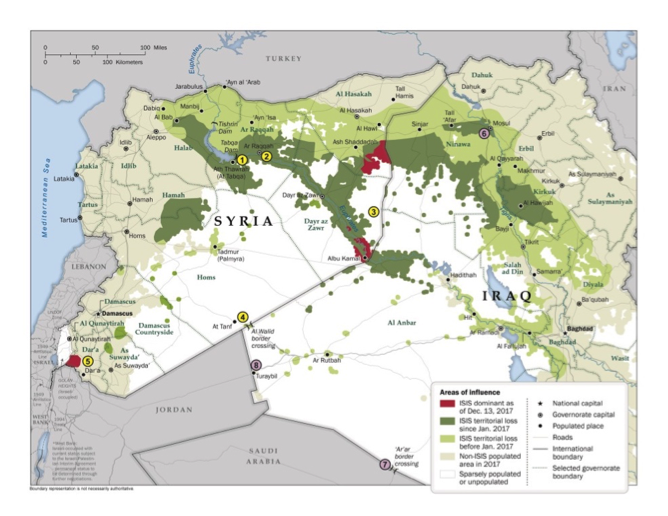 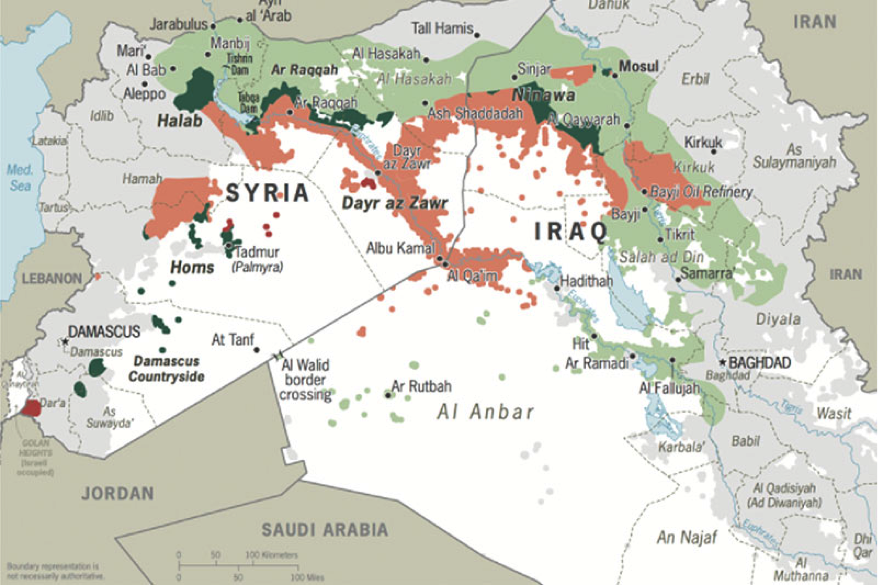 Using these maps and multiple sources from the State Department and Pentagon and IHS Conflict Monitor, a think tank that provides data on wars, I have created a map below that dovetails with the 2016 Pentagon and State Department maps above and for the first time delineates territory liberated from the Islamic State under Obama in light green and under Trump in dark green. 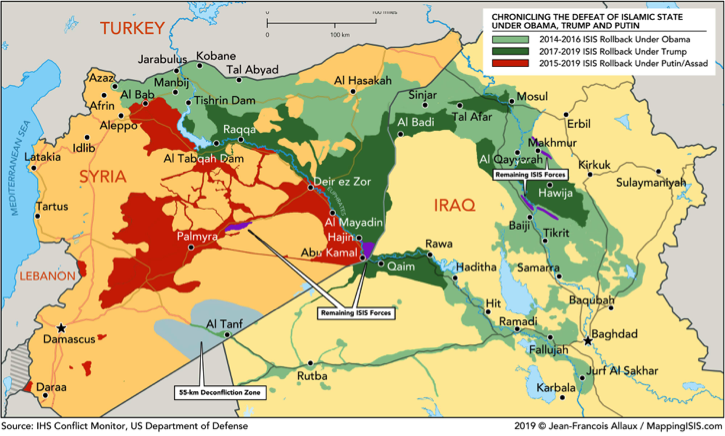 Using Pentagon and State Department reports which track the liberation of towns in Iraq I have also created a map that shows that under Obama the Coalition liberated much of Iraq, including half of Mosul (the Islamic State’s largest city) and most of the towns of the so-called Sunni Triangle. 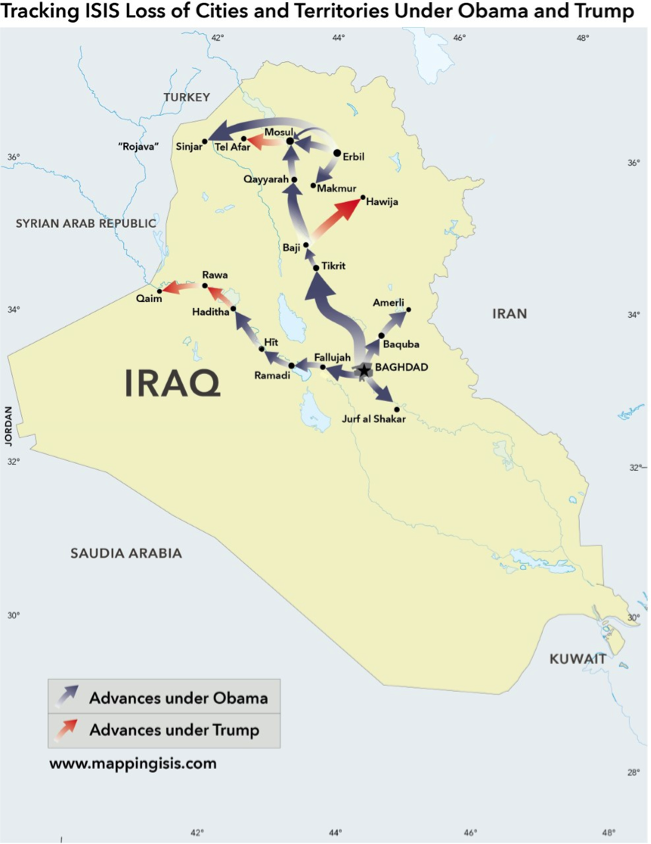 A Deadly War of Attrition

Under Obama ISIS also suffered considerable loss in life. A month before Obama left office CNN was to cite the US envoy to the Anti-ISIS Coalition in a report that captured the devastating losses to the ISIS fighting force:

At least 75% of ISIS fighters have been killed during the campaign of US-led airstrikes, according to US officials. The US anti-ISIS envoy said the campaign has winnowed ISIS' ranks to between 12,000 and 15,000 "battle ready" fighters, a top US official said on Tuesday. The figures mean the US and its coalition partners have taken out vastly more ISIS fighters in Iraq and Syria than currently remain on the battlefield, two years since the bombing campaign began. Last week a US official said the coalition had killed 50,000 militants since 2014.

At approximately the time Obama left the White House in the winter of 2017, General Raymond Thomas, head of US Special Operations Command, told a symposium in Maryland, “We have killed over 60,000 [ISIS members].”

If accurate, the Pentagon claim of 60,000 militants killed by the time Trump took office speaks to a devastating war of attrition in the two and half years that Obama oversaw the campaign. In July 2016, six months before Obama left office, the assessment that ISIS was being defeated on the battlefield was reaffirmed by Secretary of Defense Ashton Carter. He noted that “play by play, town after town, from every direction and in every domain—our campaign has accelerated further, squeezing ISIL and rolling it back towards Raqqa and Mosul. We’re isolating those two cities and effectively setting the stage to collapse ISIL’s control over them.” In addition to losing territory and fighters under Obama the Islamic State lost most of its oil producing capacity in a massive bombing campaign known as Tidal Wave II and its fallback capital and its sanctuary in the Libyan town of Sirte. A Pentagon spokesman reported that the November 2015 bombing blitz destroyed “90 percent” of ISIS’s oil capacity.

All of this data clearly demonstrates that Trump’s claim to having overseen “100 percent” of the defeat of ISIS is demonstrably false and amounts to nothing more than campaign season hyperbole. According to all contemporary sources on the war, Obama and Biden deserve far more credit for the “degrading and destruction” of the Islamic State caliphate than Trump or Pence have given them in their self-promoting claims.