Matthijs Tieleman is a PhD Candidate in History at the University of California, Los Angeles (UCLA). He tweets @matthijstiel. 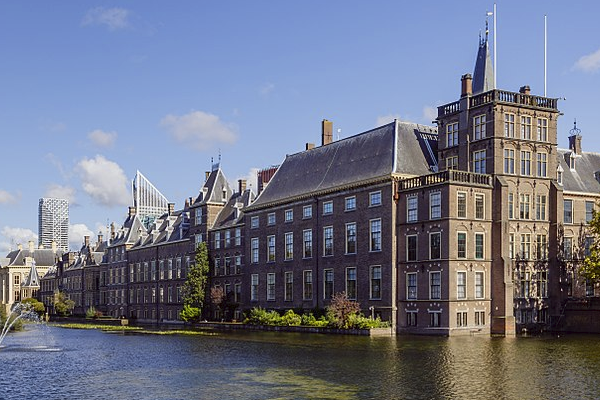 Binnenhof, seat of the States General of the Netherlands, The Hague

On the eve of the 2020 US presidential elections, American society remains deeply polarized. Study after study demonstrates that Republican and Democratic voters disagree on key policy issues, are becoming increasingly partisan, and rarely switch parties. Whoever gets elected president of the United States in November will unquestionably govern a divided and restless nation.

The 2020 election may be pressing and significant, but more relevant for the long term is how to move forward. If the United States is to survive, what can be done to mitigate the country’s divisive politics?

The history of the Netherlands serves as both a warning and an opportunity for the United States in its current polarized state. The Dutch lesson is that there is a way to achieve reconciliation and deal with the divisions that naturally arise in any society; the embrace of political pluralism.

Similar to the United States today, the Dutch Republic - the predecessor to the current Kingdom of the Netherlands - was a deeply divided country around the time of the American Revolution. Comparable to Democrats and Republicans in American politics, the Dutch Republic had two opposite poles on the political spectrum, the Patriots and the Orangists.

By the late eighteenth century, the Orangists were defenders of the status quo and their most ardent supporters hailed from the urban working classes and farmers in the countryside. They favored an alliance with Great Britain and large standing armies to defend against land invasions from France.

In contrast, the Patriots were an opposition movement predominantly from the urban mercantile middle classes. They supported larger navies to protect their overseas trade. The Patriots regarded the incumbent government as a corrupt aristocracy and sought to reform it through elections and the creation of citizen’s militias.

Like in the United States today, various developments amplified the political stakes as well as the polarization between the two parties. The Dutch Republic had been a world power in the seventeenth century, famous for its riches, military might, and high culture, but the country experienced a gradual decline of prestige in the eighteenth century. Foreign powers such as France and Great Britain sought to exploit Dutch internal divisions for their own benefit. Meanwhile, wealth inequality had grown to epic proportions with real wages barely rising.

“Imbecility in the government; discord among the provinces; foreign influence and indignities; a precarious existence in peace, and peculiar calamities from war”, was how Alexander Hamilton and James Madison portrayed the Dutch Republic in the Federalist Papers in 1787. In other words, much like how many would currently characterize the United States.

The Orangists and the Patriots insisted that polarization was the root cause of Dutch decline. Both parties agreed that only unity (eendracht) could restore Dutch glory, basing their argument on the Dutch Republic’s motto, Eendracht maakt macht, or strength through unity.

But the pursuit of unity in a country in which people would never fully agree on policy was as cynical as it was destructive. Though the Patriots favored the implementation of elections, they often limited who could vote for local offices by requiring membership in a citizen’s militia to cast a ballot, a rule that heavily favored the Patriot party. Similarly, Orangists thought that unity could be achieved through collective deference to the Stadtholder, an executive with monarchical pretensions who was allied with the Orangists. In the end, neither party got their way, at least not permanently. After an invasion by French revolutionary forces in 1795, the Dutch Republic ceased to exist.

Political compromises on universal suffrage, labor rights, and freedom of education in the nineteenth and twentieth centuries institutionalized political pluralism in the Netherlands, which proved an effective method of easing tensions between various factions in politics and civil society. These compromises ushered in the period of “pillarization” (verzuiling) in Dutch society, the cultural foundation of political pluralism in the Netherlands today. It was broadly understood that different factions in society could peacefully coexist, as long as each group respected each other’s “sovereignty”, as Calvinist politician Abraham Kuyper put it. Socialists, various Christian denominations, and liberals each formed their own civil society in which they practiced their beliefs and shaped their political ideas.

The period of pillarization in the Netherlands is long gone, but the culture of political pluralism persists. Dutch Parliament currently counts thirteen different parties with the largest only commanding thirty percent of the seats. Though Dutch people complain about the quality of contemporary political debate and the splintering of political parties, having a different view than your neighbor on a political or cultural issue is hardly problematic.

We understand the contemporary United States as fundamentally different than the Netherlands in this regard, in part because politicians and their partisans have manufactured a red/blue, Republican/Democrat division to benefit electorally from polarization. Yet the idea that American citizens, nearly 330 million people from an endless variety of ethnicities, faiths, and socioeconomic backgrounds, can be categorized as either Republican or Democrat is a grotesque oversimplification. Even on abortion, arguably one of the most divisive issues in American politics, American citizens actually have a much less binary view than is usually understood.

It is unrealistic to expect that the United States will become a multiparty democracy any time soon. But what needs to be broadly recognized is that societies will always have a wide variety of political ideas that somehow have to be reconciled in compromised public policy, a fact the Dutch Patriots and Orangists never understood. Important steps can be made towards gradually building a culture of E pluribus unum, the foundation of a new era of political pluralism in the United States.

Practically, citizens should be encouraged to envision themselves on a larger political canvas than just Democrat, Republican, or even independent. In the Netherlands, millions of voters fill out the StemWijzer (literally “Vote Indicator”) before every election to orient themselves on the political spectrum. State governments and educational institutions should popularize the use of similar nonpartisan tests, such as the Pew Research Center’s Political Typology Quiz.

The humanities also have an important role to play in promoting political pluralism. Through the humanities, students learn to appreciate how diverse political views and compromise shaped society around them. For instance, documents like the Declaration of Independence or the United States Constitution should be examined as products of compromise between people with a wide variety of ideas as opposed to a genius document that simply fell out of the founders’ heads.

Likewise, governments on every level should do more to combat the civic illiteracy of American students. A holistic and deep understanding of civics is key to creating an informed and politically tolerant citizenry and can become a vehicle for political pluralism. In addition to learning about the Republican and Democratic parties, students should know more about the rich socialist and libertarian political traditions in the United States to help them recognize the diversity of opinions on the American political spectrum.

The embrace of political pluralism is essential to the health of the American Republic and will be even more so as polarization persists in the coming years. Voting is often seen as the duty of every citizen in a democracy and that is certainly important. But voting is just one part of citizenship. The history of the Dutch Republic demonstrates that polarization can gradually destroy a country from within and can easily be exploited by foreign actors. The embrace of political pluralism by every citizen is the key antidote to the rot of polarization and partisanship that haunts American politics today.