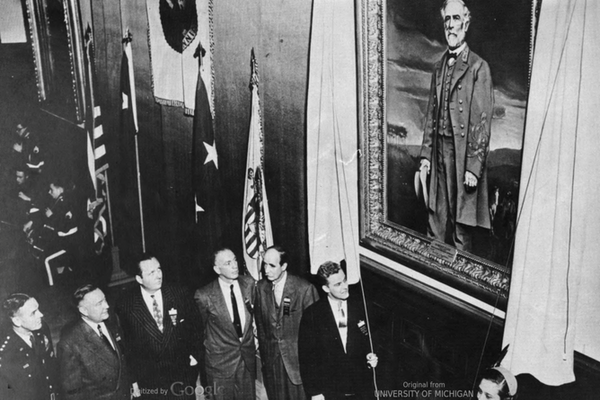 Dedication of Portrait of Robert E. Lee, United States Military Academy, 1952.
By moving to eliminate all Confederate names on military installations and banning the display of the Confederate flag, the U.S. military is following the example of the Bundeswehr (German Armed Forces) during the unification of Germany in 1990, when it assumed control of the National People’s (East German) Army (NPA).
Thirty years ago, as the Federal Republic of Germany (West) and the German Democratic Republic (East) were preparing to unify, I had the privilege of serving as a “liaison officer” to the West German Army. In 1989, I was embedded in the German Army at a major installation in Cologne. For the next several years,  I witnessed first-hand and researched how the West German Army took over the remnant of the East German Army, reduced by October 3, 1990, to about 90,000 men.
One of the key decisions West German political and military leaders made related to the symbols—monuments, plaques, wall murals—and traditions of the East German Army. They decided that none of the NPA symbols and traditions would continue into the new German Army after unification. State Secretary Karl-Heinz Carl told me that he made the decision that the identity of the NPA should vanish. “On October 3, 1990, one Bundeswehr.” In my interviews with members of the West German Army, they stressed how the East German Army was rooted in a fundamentally different value system—a Communist value system where the Communist Party officials always had the final word. With unification, a fundamental break with these values was necessary. The former NPA soldiers would now belong to an army of a democracy, rooted in the concept of the “citizen in uniform” [Staatsbürger in Uniform], which placed a high value on individual human dignity, basic rights, and the rule of law.
The Bundeswehr implemented this policy beginning on the very first day of unification. No East German or NPA flags were hoisted or lowered. All NPA unit colors, streamers, orders of the day, and documents that conferred names of facilities and garrison signs were sent to the Military History Museum in Dresden. All East German, NPA, and Warsaw Pact medals and awards were banned.
In a recent conversation with me, Lieutenant General Werner von Scheven, Deputy Commanding General for the takeover of the former East German forces, summarized the policy: “For the most part, no physical symbols of the NPA were allowed to remain in public view, and none of the Communist ideas, principles, and traditions were allowed in the new German Army.”
As the German military in 1990 decided that a definitive break with the past was needed, so today the U.S. military has begun a definitive break with the ideas and their attendant symbols of the antebellum South and the Confederate States of America—specifically inherent white supremacy and its inverse, inherent black inferiority.
In mid-July, Secretary of Defense Mark Esper announced a new policy which effectively bans the Confederate flag from being displayed on military bases. General Mark Milley, the Chairman of the Joint Chiefs, told Congress: “These generals [of the Confederacy] fought for the institution of slavery. We have to take a hard look at the symbology.”
In stark contrast to the partisanship of recent years, the Congress—with strong support from both parties—is also taking action. On July 21, the House passed an annual defense bill which requires the Department of Defense to change the names of all military bases named after leaders of the Confederacy. It also prohibits the display of the Confederate flag on military installations.
On July 23, the Senate followed suit, overwhelmingly passing a bill which calls for the formation of a commission to prepare a plan for renaming the bases. The Defense secretary would then “implement the plan submitted by the commission …and remove all names, symbols, displays, monuments, and paraphernalia that honor or commemorate the Confederate States of America … or any person who served voluntarily with …[it] from all assets of the Department of Defense” within three years of the bill being enacted.
While President Trump has said he would veto a bill with such provisions, the votes in both houses of Congress indicate that it would be overridden.
By taking these actions, the U.S. military would put itself among the many towns and states that have already heeded calls from activist groups and taken such actions in recent years, but especially since the killing of George Floyd on May 25. In February, 2019, the Southern Poverty Law Center reported that since the June 2015 white supremacist attack at the Emanuel A.M.E. Church in Charleston, SC, 114 Confederate symbols had been removed across the country with 1,747 still standing. Most significantly, such action has been taken in Richmond, VA, the former capital of the Confederacy. In early July, Mayor Levar Stoney, citing public safety and the need for healing, used his emergency powers to remove about a dozen Confederate statues. He stated: “It is time past.” “We have needed to turn this page for decades, and today we will.”
Over fifty years ago the large portraits of General Robert E. Lee and Ulysses S. Grant, facing each other on opposite walls in the large reference room of the West Point library, would mesmerize me as I did homework there. The portraits still remain mounted in the newer cadet library, the library staff recently told me. While I may regret the possible movement of General Lee’s portrait to the West Point Museum down the road from the library, it would be a small but necessary step towards an American reconciliation.
comments powered by Disqus