Curtain Up: Two Theater Companies Return to Live Performance, with Concessions to COVID 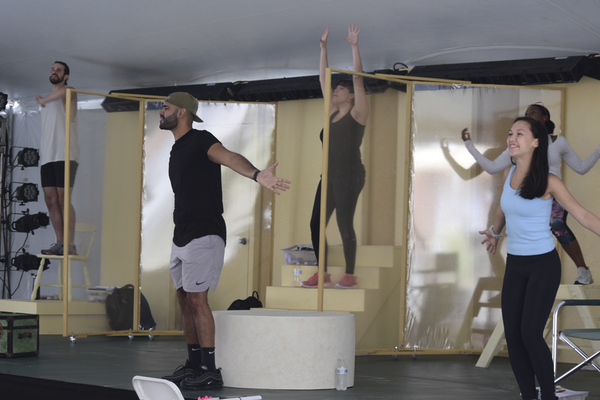 The Berkshire Theater Company rehearses "Godspell" in Pittsfield, MA in preparation for an outdoor performance under COVID-19 precautions.

The show must go on…finally.

There has been no professional legitimate theater anywhere in America since early March, when the coronavirus hit and the nation's stages were shut down by Broadway producers, theater officials across the country and the Actors’ Equity Union. That shutdown lasted a few months and then was extended to next January. America was stageless. Two theaters, though, with the courage of Shakespeare’s greatest heroes, are flinging open their doors once more this week. And with history plays, too.

How will they do it in this pandemic world? They’ll do it thanks to the two state Governors, the Actors’ Equity national office, lots of planning, unique seating charts, masks, hand sanitizers and lots of outdoor fresh air.

The Shakespeare Theatre of New Jersey, at Drew University in Madison, N.J., is producing a double bill of Edna St. Vincent Millay’s Aria Da Capo and Moliere’s The Love Doctor and, separately, Verily, Madly Thine, a series of Shakespeare scenes about the crazy things people do when they are in love. They are calling it Crazy Love! Millay’s play is a short one act anti-war play, written in 1920. Moliere’s farce, also about lovesick people, in France, was written in 1658 and was Moliere’s first play produced in front of King Louis IV, who adored it. The comedy was staged in the Louvre’s theater, since abandoned. It saved the reputation of Moliere, the author of School for Wives and Tartuffe.

The Berkshires Theater will stage Godspell outdoors under a tent behind its old Colonial Theater in Pittsfield. In New Jersey, the Shakespeare Theater will stage its repertory of plays outdoors on its great lawn. Both theaters require all patrons, staff and volunteers to wear masks throughout the entire performance, sit a good six feet away from each other in small seat clusters, restrain from using the rest rooms (yes, the outdoor ones we all know and love) or, as at Pittsfield, use every other stall and urinal and move everywhere in single, straight lines. Patrons in Pittsfield will have their temperatures checked.

The Shakespeare Theatre at Drew University will stage its plays on the Great Lawn at its Thomas H. Kean Theatre Factory in nearby Florham Park, not in its indoor theater at Drew (or its outdoor amphitheater across the street).

The theater’s Shrewd Mechanical Company, a group of eight non-Equity actors, will perform in both plays.  The company has lived in Madison in isolation in the same house for several months and been tested regularly for the virus.

“We are one of the first companies to be bringing live theatre back to life.  Given the restraints that the pandemic has placed  on all of our lives and our normal activities, this little  announcement feels monumental, groundbreaking and thrilling – and under the circumstances it kind of is – certainly for us and we hope for you too!” said Bonnie Monte, the artistic director of the Shakespeare Theatre of New Jersey in a statement.

The Berkshires theater is staging the hit musical Godspell, which had its Off-Broadway debut in 1971, was revived several times on Broadway, and has been staged ever since all over the world. The musical, with music by Stephen Schwartz and book by John-Michael Tebelak, is based on the Gospel according to Matthew and has a rousing, roof rattling hit song, Day by Day.

The Berkshires theater officials wanted to stage their play outdoors.

“Everybody in this country is scared to go to a theater anywhere, so we thought holding the play outside, with special, limited seating (80), would make people less afraid to come to the theater,” said Nick Paleologos, the executive director of the Berkshire group.

It is working. Paleologos says tickets are selling briskly,

The Berkshire people had to battle with the Actor’s Equity Union to get the one exemption to stage a play. “It was a tough fight, but worth it,” said Paleologos.

He thinks his theater will be safe and his show a good one.

“We wanted to do a really ‘feel good’ play to try to get people out of the doldrums of COVID,” said the executive director.

Godspell battles COVID directly. It is set in the “age of COVID” said Paleologos. The actors, always six to ten feet away from each other on stage, sometimes wear masks and even facial shields and protective costumes.

There is another reason the theater is staging Godspell. “We want to remind the Berkshires, and the country, that the virus will be defeated and that in the meantime we must reclaim our lives and the arts is the way to do that,” said Paleologos

The problem with both shows, of course, is that they are being staged outdoors. Neither theater will be able to present indoor shows until the end of the year or beginning of 2021.

The Shakespeare theater plays start Thursday, July 30 and continue until August 9. Performances are at 7 p.m. with some 4:30 p.m. matinees. All tickets are $20. The Berkshire Festival Godspell opens August 6 and continues until September 4. Godspelltickets are $100.

(Some states, such as Massachusetts, do permit plays to be staged indoors, but we currently do not know of any.)