Was there a Third A-Bomb? A Fourth? A Fifth? 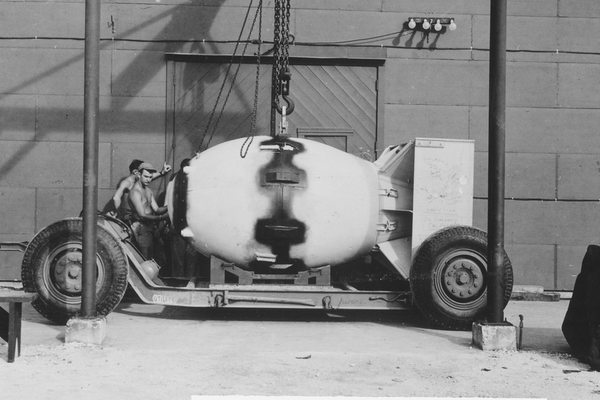 The "Fat Man" is moved from Assembly Building #2, Tinian

High School textbooks teach that the atom bombs dropped on Hiroshima and Nagasaki were flown to Japan by B-29 Superfortresses based on Tinian in the Mariana Islands. They do not recognize that the bombs were actually assembled on Tinian under combat conditions, not at the Los Alamos Laboratory in New Mexico.

On January 19, 1945, Dr. J. Robert Oppenheimer, Director of the Los Alamos Laboratory, advised Maj. Gen. Leslie Groves, Commanding General, Manhattan Project, “Aug. 1 for L.B [Little Boy] and 1- F. M. [Fat Man]; Sept. for 2 or 3 F.M.; October for 3 F. M….” In early February, General Groves sent Commander Fred Ashworth, USN, to the Marianas to pick a site for the assembly and delivery of the bombs. He chose Tinian because it was 100 miles closer to Japan than Guam, and Saipan was overcrowded with the 73rd Bombardment Wing flying missions to Japan. Tinian became “Papacy.”

Groves then sent his colleague, Colonel Elmer E. Kirkpatrick, Jr., Army Corps of Engineers, to Tinian to oversee the construction of the necessary Manhattan Project facilities; an ordnance area with technical labs for subassemblies, three bomb assembly buildings, and two bomb loading pits, without telling anyone in the Marianas, except Nimitz.  Why three assembly buildings?

Meanwhile, Captain William Stirling “Deke” Parsons, USN, an ordnance specialist, assumed the position of Deputy Director of the Los Alamos Laboratory.  His job was to design a bombing mechanism from all the gadgets the scientists had created, one that could be dropped from an airplane. Having created a proximity fuse for Navy 5” anti-aircraft guns and tested it in combat in the Southwest Pacific Area, he knew what had to be done to move the Project to the front successfully. Besides planning the deployment, he also oversaw the manufacture of bomb parts at various factories across America and coordinated shipments to a packaging warehouse in San Francisco.

Commander Ashworth and four men from the Project Alberta assembly teams arrived on Tinian on June 27th and began organizing those bomb parts that had already arrived at the 1st Ordnance technical area.  There were enough to make fifty bombs, some of which would be used to make final test drops just off Tinian’s northwest coast. Why fifty?

After Little Boy was dropped on August 6th, the assembly building was cleaned and restructured to handle the far different Fat Man bombs.  After Fat Man was dropped on August 9, work immediately began on another.  On the 12th, Truman decided no more bombs would be dropped without his signed order.  General Carl Spaatz, now stationed at Guam recommended the next bomb be dropped in the burnt our section of Tokyo, so that Hirohito and his military clique could watch the show from the Palace. At that time, the plutonium core for the second Fat Man—the third bomb—was being loaded into a vehicle for the ride to Tinian, but never left Los Alamos.

Had Japan not surrendered, would there have been a third bomb, a fourth, a fifth, as many as necessary?  No one will ever know.

The question of America’s use of the bombs will forever be debated.  After the Trinity Test on July 16, Truman had to make a decision.  As anti-nuclear activists have written, the U.S. did not need to use the bombs to end the war. The Allies could have strengthened the blockade of Japan, continued the aerial bombardment and let the Japanese burn and starve themselves into surrender no matter how long it took, forgetting about the Chinese who were dying by the thousands daily, and the Allied prisoners of war who were dying like flies in Japanese POW camps.

Which choice would be the less inhumane?