John Feerick is a professor of law at Fordham Law School and the occupant of the Sidney C. Norris Chair of Law in Public Service. He teaches and writes in areas of the Constitution, legal ethics, and conflict resolution. His books include the third edition of The Twenty-Fifth Amendment: Its Complete History and Applications, and From Failing Hands: The Story of Presidential Succession, which was helpful in framing the Constitution's 25th amendment. He recently published a memoir, That Further Shore: A Memoir of Irish Roots and American Promise with a foreword by Thomas J. Shelley. 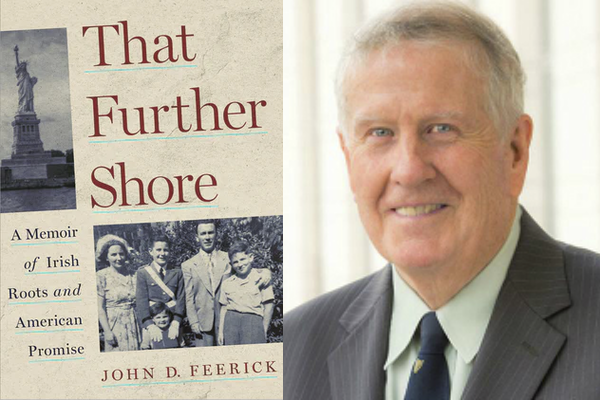 The book in its initial stages (18 years ago) was to be a story of my parents, both of whom emigrated to America from Ireland in their late teens. The idea of writing such a book, rather than on the Constitution as my earlier book efforts, developed at the end of the decade after their deaths in the late 1980's. I felt the pain of their loss very deeply, and began in 1989  to make trips in the summer period to Ireland to learn more about them as children, their siblings, and their ancestry. I visited cemeteries to check out the inscriptions on tombstones for information on my ancestors.  I walked around the farms on which my parents were born to learn something about farming and the bog land. I visited the locations of the elementary schools they attended, because that was the limit of the formal part of their education.  I visited the churches they attended in Ireland as children to light candles in their memory and to meet the pastors of the churches in the hope of finding more information about them and their families. I discovered facts that were new to me and to even my Irish relatives. I spoke to neighbors and friends of their families in Ireland about what life was like for my parents as children. I learned about the music of their time, the kind of  games they played, and the work they performed on their family farms. I studied the Irish railway system, even reading books about the system, so that I could visualize the journey that took them from their homes in County Mayo to  County Cork for the ship each traveled on to America.  I relived that train ride in my mind, with the facts I had, and speculated where they may have stayed overnight once arriving in Cork before the ship left for America, not unlike the Titanic whose last stop was Cork before its Atlantic journey. I stood on the dock in County Cork where my parents likely stood in 1928 and 1929, imaging what it must have been like for them,  leaving alone with a few pounds and possessions, without anyone present to see them off. Little did they realize they would never again see their parents and some of their siblings.

On arriving in America, they found a place to stay for a brief while in a rooming house in Manhattan, then located employment and eventually met at a house party or dance, dated, married, and began to raise a family. I was their first born and for the next 23 years I came to know them in their small  apartments in the Bronx, first in buildings without elevators and then at 305 East 161st street, which is not far from Yankee Stadium. We lived in what seemed like a a little village, with everything available to us, despite the  presence and noise of trolley cars, milk trucks, and all kinds of other vehicles. We played our games on the streets, with cars moving east and west, near our apartment house.  We attended a Catholic school around the corner from us, which was adjacent to our church, and a public school and public library. Along the route from our house to the school were many small stores and shops that served all our needs.  In our two bedroom apartment love was ever present though we did not recognize it at the time. We learned about the world from a World Book encyclopedia set my parents purchased from a salesman at the door.  We said our prayers at night, and ate and did our homework around the kitchen table, with clothes to be dried hanging from the ceiling.  We most reluctantly from time to time accepted parental discipline for our mischief. We enjoyed our holiday celebrations, time away from school, such as Christmas and Easter and loved hearing the  music that flowed when our parents had friends over for a celebration of a birthday or holiday. We watched Mom sing and dance at these events while  Pop played the accordion.

We took to heart in time their constant refrain on the importance of studying, not missing school, going to confession to repent for our sins. and buckling down and making something of ourselves without any proscriptions from them as to what to do with our lives  I was a slow starter, unlike my siblings, with three of us in fold by 1941 as Pop went off to war-related service, and with two other siblings who came along after the war.  Mom was on duty 24 hours a day, taking us to parks in carriages as young children and when we were older, encouraging us to stay outside and play until dinner time lest she go crazy, crowded as we were in a very small apartment. She cooked and painted and knitted clothes for us to wear. She did the wash in the kitchen sink and hung clothes for drying on lines both inside and outside our apartment. We had no TV until 1951 but we loved listening to the radio. While a telephone at some point was installed, we rarely used it. Pop worked at all kinds of trades - on milk trucks, in the subways, on the waterfront, and on military installations during the war years, and then as an operator of trolleys and  buses until he retired. He accepted the decline of Mom, giving her a total commitment until cancer took his life. And how does all of this tie to a book with so much of my own history? Simply stated: my story would  not have been possible without my parents, their love, devotion, values, example and their commitments to the five of us as children, the families they left behind, their friends,  and to the country they adopted.

It was a most happy childhood I had, which I began to realize as I put down in writing their story, and I saw that my story and the stories of their other children were integral to their lives in America.  Work by us in part time jobs was encouraged by them and we took advantage of that in order to have a few dollars to spend and later help pay for school costs. When  I attended college, I became more conscious of them and their love, dreaming that maybe someday I could afford to buy them a color TV set, help them purchase tickets to return to ireland to see their families again, and maybe in time  build for them a house in Lake Carmel where they had a small building lot but no money to build a house. These became my life's goals as I left college to attend law school in 1958. A religious vocation and a supermarket management position were, during my college years, my principal career goals, but these faded as I  approached graduation  and saw life as a lawyer allowing me to become engaged in the political system. My plan for the future was otherwise left open to what came along.

Little did I foresee that one day I would have an opportunity to join what became one of the most successful law firms in the world and to serve as dean of a law school that became nationally and internationally recognized, and to be afforded an opportunity, because of my writings, to help in the crafting of two constitutional amendments, one now in the US Constitution, and the other, for the abolition of the electoral college, that has made it successfully through the House of Representatives in 1969. So many other opportunities unexpectedly came along in areas of conflict resolution, mediating and arbitrating disputes, chairing state investigative commissions, serving in leadership positions in the organized bar and on corporate boards, and engaging in volunteer causes in New York and Washington, and peace making activities in Ghana, and Northern Ireland.

But none of the above would have been possible without my parents, When they left us there was hardly any notice of them other than having lived and died. I therefore decided to tell their story and in the process my own story as a kind of verification of the quality of their lives in America, having arrived from a foreign land as their adult years were about to begin.