75 Years Later, Purple Hearts Made for an Invasion of Japan are Still Being Awarded

D. M. Giangreco is the author of 13 books and is a frequent contributor to HNN.  His most recent article for HNN is “‘Mr. Straight Arrow,’ John Hersey, and the decision to drop the atomic bomb”. 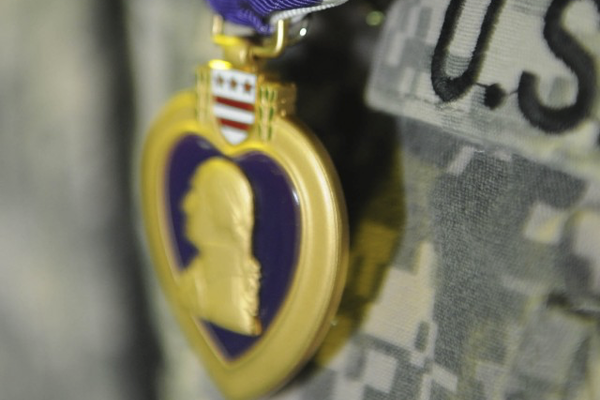 The decoration, which goes to troops wounded in battle and the families of those killed in action, had been only one of countless thousands of supplies produced for the planned 1945 invasion of Japan, which military leaders believed could last into 1947.

Fortunately, the invasion never took place. All the other implements of that war --- tanks and LSTs, bullets and K-rations --- have long since been sold, scrapped or used up, but these medals struck for their great grandfathers’ generation are still being pinned on the chests of young soldiers.

In all, approximately 1,531,000 Purple Hearts were produced for the war effort, with production reaching its peak as the Armed Services geared up for the invasion of Japan. Despite wastage, pilfering, and items that were simply lost, the reserve of decorations was approximately 495,000 after the war.

By 1976, roughly 370,000 Purple Hearts had been earned by servicemen and women who fought in America’s Asian wars, as well as trouble spots in the Middle East and Europe. This total also included a significant number issued to World War II and even World War I veterans whose paperwork had finally caught up with them or who filed for replacement of missing awards.

It was at this point that the government agency responsible for storage and distribution of military medals, the Defense Supply Center in Philadelphia (DSCP), found that their decades-old stock of Purple Hearts had dwindled to the point that it had to be replenished.

The organization ordered a small number of medals in 1976 to bolster the “shelf worn” portions of the earlier production still retained by the Armed Services at scattered locations around the globe. It was then that an untouched warehouse load of the medals was rediscovered after falling off the books for decades. The DSCP suddenly found itself in possession of nearly 125,000 Purple Hearts to add to their continually diminishing stock.

Increasing terrorist activity in the late 1970s and ‘80s resulted in mounting casualties among service personnel and a decision was made to inspect and refurbish the newly found medals. Fully 4,576 of the 124,588 Purple Hearts stored in the Pennsylvania warehouse were deemed to be too costly to bring up to standards and were labeled “unsalvageable.” The remaining decorations were refurbished and repackaged between 1985 and 1991.

Remarkably, more than 120,000, including many of the refurbished medals, were in the hands of the DSCP’s “customers,” the Armed Services, by the beginning of the 1990-1991 Gulf War, stocked at military supply depots and also kept with major combat units and field hospital units so they could --- and would --- be awarded without delay.

Demand for the item was high. By the end of 1999, great numbers of the refurbished medals had been shipped out and the Defense Supply Center entered into contracts for the first large-scale production for Purple Hearts since World War II as 9,000 new awards were ordered for the most simple of bureaucratic reasons. So many medals had been transferred to the Armed Services that the DSCP had to replenish its own inventory.

Emerging wars in Iraq and Afghanistan in the wake of the 9/11 attacks of 2001 necessitated that much of the remaining stock made for the invasion of Japan be “pushed forward” with the result that the current government organization responsible managing the inventory, the Defense Logistic Agency, decided to order the production of 21,000 new Purple Hearts in 2008.

As for the most recently minted medals, they, like those manufactured in 2000, are functionally identical to the refurbished 1945 medals which had their ribbons and clasps replaced before being place in the sleek plastic presentation cases that replaced the original World War II-era “coffin boxes.”

All medals, old or new, are considered part of the same stock for inventory purposes and some portion of the new production is undoubtedly mixed in with the refurbished oldsters ready for immediate distribution by the Armed Services --- not that anyone other than a specialist in the decoration would be able to tell them apart.

An important thing to consider on this 75th anniversary of the war’s end is that when Harry S. Truman became president following Roosevelt’s death in April, 1945, Americans from Walhalla, Texas, to Washington, DC, believed America to be in the middle of the war.

Nazi Germany had been defeated at a terrible cost and now the final battles with Imperial Japan loomed. The initial invasion operation of Operation Downfall would be launched before Christmas 1945 and all wondered who would survive to sail home beneath “the Golden Gate in ‘48” after more years of brutal combat.

By July 1945, the US Army and Army Air Force had already suffered more than 945,000 all-causes casualties. As early as January that year the New York Times printed the dire warning of General George C Marshall and Admiral Ernest J. King that ‘’The Army must provide 600,000 replacements for overseas theaters before June 30, and, together with the Navy, will require a total of 900,000 inductions by June 30.’’

To meet these needs, the Army had organized a 100,000 men-per-month ‘’replacement stream’’ for the coming one-front war against Japan and the Army's figures, of course, did not include Navy and Marine casualties.

Meanwhile, some War Department estimates indicated that the number of Japanese dead could reach between five to 10 million, with the possibility of 1.7 million to as many as four million American killed, wounded, and missing to combat, disease, and accidents if the worst case scenarios based on the recent Iwo Jima and Okinawa battles came true. Across the Pacific, the ultimate casualty figure being circulated within imperial circles in Tokyo was 20 million --- a fifth of Japan’s population.

Among the fantastic quantity of war supplies to support the young Americans grimly facing the coming Armageddon were the Purple Hearts awarded into the twenty-first century despite their production being cut short by Japan’s sudden and unexpected surrender.

Many of the World War II veterans, still alive fifty years after the war, were keenly interested in the fact that a huge quantity of medals had been discovered in a government warehouse and readied for future use.  Chief among them were those who had worked with the Smithsonian Institution on the 50th Anniversary display of the Enola Gay, the B-29 bomber that dropped the atom bomb on Hiroshima.

Controversy had erupted over the Smithsonian’s presentation at the National Air and Space Museum, when veterans protested that the multimedia display and exhibit script was crafted in a way that portrayed the Japanese as victims, and not instigators, of the war.

The veterans were heavily criticized in some academic circles for their insistence that the dropping of the atom bomb had ended the war quickly and ultimately saved countless thousands of American --- and Japanese --- lives during an invasion.

When learning of the rediscovered medals and new production after the Smithsonian fiasco, Jim Pattillo, president of the 20th Air Force Association stated that, “detailed information on the kind of casualties expected would have been a big help in demonstrating to modern Americans that those were very different times.”

Medical and training information in “arcanely worded military documents can be confusing,” said Pattillo, “but everyone understands a half-million Purple Hearts.”

But perhaps the most poignant appreciations came from a Vietnam vet --- with a grandson and nephew in the Army today --- who learned for the first time that he had received a medal minted for the fathers of he and his buddies.

“I will never look at my Purple Heart the same way again,” he said.

With perhaps as many as 60,000 of the World War II production still spread throughout the system, it’s possible that some unknown number will still be available another 75 years from now.  Let’s hope that all are.