"You Sold Me to Your Mother-in-Law...": An Ongoing Quest to Reconnect a Family

Yes, black lives matter, even a century and a half later. Let us remember them with dignity and post proofs that they are not forgotten, as Edward E. Baptist advised in Stony the Road they Trod: Forced Migration of African Americans in the Slave South, 1790-1865 (2002):

The idea that lost loved ones were out there somewhere continued to haunt and to inspire black families for years to come. . .

. . . historians, who can do their work only because those who have long gone have left them messages and words buried in documents they study, have an ethical obligation to give voice to the dead.

Sparked by those convictions almost 50 years ago, Jan Hillegas and I collaborated with George P. Rawick, a comrade and friend from my teens, to gather, edit, and publish narratives of former slaves in ten supplementary volumes to Rawick’s encyclopedic compilation The American Slave: A Composite Autobiography.

Members of the Federal Writers Project had conducted the interviews in the 1930s, but that Depression Era program ended abruptly when the United States was thrust into World War II. Unfinished transcripts were boxed and stored, many of them unlabeled, without a record of their locations. Surviving files had been neglected for more than 30 years when we mounted a search for them in archives and institutional depositories throughout the Southern states.

That was the largest project undertaken by our Deep South People’s History Project, and probably the most indelible. The essential value of the Mississippi section, which comprises five volumes, is that it increased the number of published first-hand accounts by survivors of slavery in that state from a couple dozen to about 450.*

Those were gratifying achievements, performed without institutional or government patronage. I have continued to write about history ever since, mostly as a contributor to philatelic publications. But an important letter that I bought from a stamp dealer about a decade ago has resisted my attempts to flesh out, follow, and narrate the story of its author. Perhaps History News Network’s community of scholars can suggest a fruitful approach.

One hundred fifty years ago, David Jackson of Montgomery, Alabama, sent this letter to a former Confederate army officer at Richmond, Virginia — a man who had inherited him, possessed him, and sold him before the Civil War: 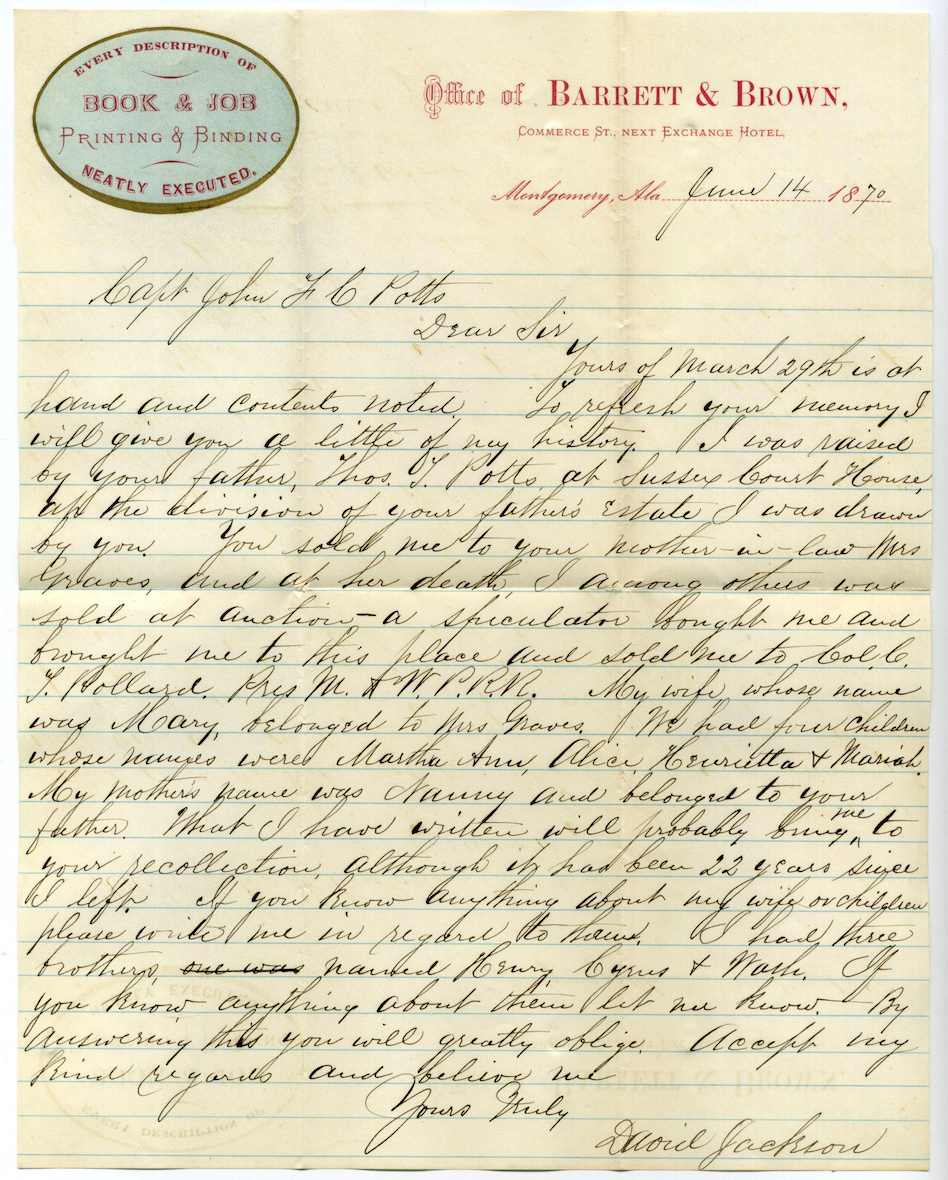 Yours of March 29th is at hand and contents noted. To refresh your memory I will give you a little of my history. I was raised by your father, Thos. L. Potts, at Sussex Court House, at the division of your father’s estate I was drawn by you. You sold me to your mother-in-law Mrs. Graves, and at her death, I among others was sold at auction — a speculator bought me and brought me to this place and sold me to Col. C. T. Pollard Pres. M.&W.P.R.R. My wife, whose name was Mary, belonged to Mrs. Graves. We had four children whose names were Martha Ann, Alice, Henrietta & Mariah. My mother’s name was Nanny and belonged to your father. What I have written will probably bring me to your recollection, although it has been 22 years since I left. If you know anything about my wife or children please write me in regard to them. I had three brothers named Henry, Cyrus & Wash. If you know anything about them let me know. By answering this you will greatly oblige. Accept my kind regards and believe me

Sold at auction to a speculator in 1848, transported from Virginia to Alabama, and sold by the speculator to a Montgomery & West Point Railroad tycoon, David Jackson had been forcibly separated from members of his family with no word of their subsequent fates for more than two decades, yet he had not given up hope of finding them.

Can today’s historians shed light on his quest?

Census records show that Jackson was born about 1825. He was about age 23 when the estate of his Virginia owner separated him from his wife and children. He was about age 45 when he wrote to John F. C. Potts hoping for word about them.

During the Civil War, Potts had commanded Company D of the 25th Battalion, Virginia Infantry (the Richmond City Battalion) until a few weeks before Appomattox. After the war he was a banker and an underwriter. He was 58 years old when he died June 21, 1876, at Richmond.

That is all I have. David Jackson, members of his family, and his descendants deserve better. If readers can help bring more to light, please write to me via the HNN editor.

* Our publisher, Greenwood Press, has hidden my 1976 interpretive introduction to the Mississippi narratives, without so much credit as a byline, in The American Slave: A Composite Autobiography, Supplement, Series I, Mississippi Narratives, Part 1, pages lxix-cx.