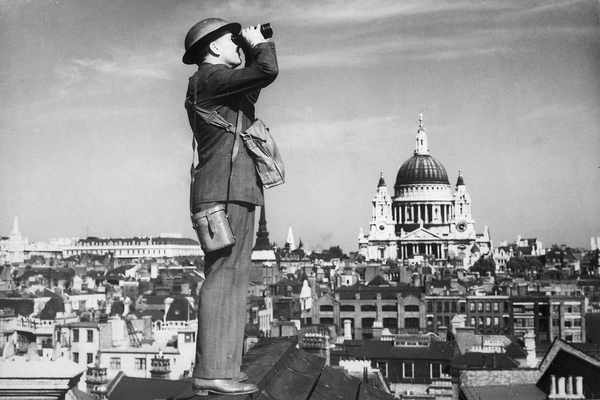 On June 4, 1940 Britain’s new Prime Minister Winston Churchill offered only defiance to the Third Reich by declaring to an enraptured House of Commons “we shall fight on the beaches, we shall fight on the landing grounds, we shall fight in the fields and in the streets, we shall fight in the hills; we shall never surrender.” Two months later, Hermann Göring, the commander of the German Luftwaffe, planned a series of aerial attacks over the English Channel to obliterate the Royal Air Force (RAF) and force Britain to ignominiously capitulate.  As Nazi blitzkriegs had already overwhelmed the Low Countries (Belgium, Luxembourg and the Netherlands) and eliminated France from the war, Hitler – ever confident and vengeful – began organizing a rally in Berlin at the end of August to celebrate his forthcoming victory over Great Britain.

The event would never take place.

In mid-August, the Luftwaffe struck several British targets.  To the surprise and consternation of the invaders, however, the RAF outdueled Nazi pilots and shot down forty-five German aircraft from the sky.  By comparison, the RAF only lost thirteen planes.  Two days later, Göring unleashed approximately 2,000 fighters and bombers upon the northern and southern coasts of England. Rather than recoil from the onslaught, the RAF repelled the attack, inflicted losses on the enemy and remained intact to fight another day. In the House of Commons on 20 August, Churchill eloquently summed up the brave contribution of the RAF stating “Never in the field of human conflict was so much owed by so many to so few.” (p. 157-182)

How did the British people manage to ward off a cross-Channel invasion and defend their Islands against the superior might of their ruthless enemy through 1940-41?  In The Splendid and the Vile: A Saga of Churchill, Family and Defiance during The Blitz (2020), Erik Larson – the author of the immensely popular The Devil in the White City (2003) – offers a compelling account of how British courage, sacrifice and tenacity in the face of annihilation resulted in victory for Britain, Europe and the world.

Through vivid prose and detailed research, Larsen captures the seismic struggle of the British people during the Battle of Britain (July-October 1940) and The Blitz (September 1940 – May 1941).  On September 7-8 German fighters and bombers covered the skies, crossed over the coastline and dropped bombs on London day and night.  Fires burned out of control, hundreds of corpses lined the streets and more than one thousand injured civilians cried for help.  Unable to gain sufficient air superiority to launch Operation Sea Lion – the Nazi plan for a full-scale land invasion, Hitler and Göring turned to total war to break British resistance. (p. 213-215) By targeting “working-class neighborhoods” and cultural landmarks in the capital, German high-command sought to demoralize Britain with relentless waves of destruction. (p. 285)

In mid-November 1940, the Luftwaffe carried out an all-out assault on Coventry – a city northwest of London.  Hour after hour into the night and until dawn, German planes unloaded scores of incendiary bombs and set the town ablaze.  As shards of glass fell to the ground, “Bodies arrived at a makeshift morgue at a rate of up to sixty per hour…so mangled that they were unrecognizable.” (p. 294-295).  Nearly six hundred perished during the Nazi demolition.  Month after month, German bombs rained down upon British cities and towns – piercing nights with devastation, dust and dire conditions. In mid-April 1941, the Luftwaffe leveled parts of London and took more than 1,100 lives in a single raid. (p.430) Three weeks later, an even larger-scale nocturnal operation consisting of “505 bombers carrying 7,000 incendiaries and 718 tons of high explosive bombs” damaged high-profile targets, including the Tower of London, Westminster Abbey, part of the British Museum and “the tower that housed Big Ben.”(p.469-473) How did the Britons manage the seemingly endless siege?

Writing in short chapters, Larson provides a plethora of fascinating details to vividly illustrate how people adapted and organized to cope with stress, strain and shortages.  Contrary to a popular misconception, most Britons took cover from Luftwaffe bombs either in the safest and sturdiest room of their homes or in designated air raid shelters rather than descending into an underground subway.  Dilapidated shelters often welcomed frightened men, women and children with dampness, putrid odors, grime, little to no heat in the winter months, an insufficient number of restrooms and in some cases – lice.  Upon the inspection of several shelters, Clementine Churchill, the wife of Winston Churchill, noted the absence of a particularly critical element necessary to British survival – tea kettles. (p. 313-316)

For most Britons, tea offered a crucial, brief and ritualized respite from wartime anxiety.  The simple acts of steeping tea leaves, stirring and sometimes pouring cream into a cup served as a balm to the soul and provided comfort in a familial and national tradition.  Of course, others, including Winston Churchill, leaned on copious amounts of alcohol. Tea and alcohol combatted the dread of negotiating dark, crater-filled streets and living without electricity, tampons or sufficient food amid the prospect of dying from an explosion or being buried alive under a collapsed building. (p. 240-246) Through uncertainty, danger and hardship, the nation refused to succumb to despair.

Winston Churchill: A Model of Leadership in a Time of Crisis

Over the course of the monograph, Larson effectively captures the breadth and brilliance of Churchill’s prime ministership during the darkest days of the war by judiciously weaving his speeches around anecdotes and chronicles of events.  From the narrative, it can be ascertained that Churchill won both the war and the admiration of millions across the world due to possessing four critical elements of leadership.

First, Churchill led with honesty.  Rather than attempting to assuage fears of a Nazi takeover or offer an expedient panacea to attain victory, the prime minister leveled with the British public and refused to minimize the threat or the sacrifices that would be required for victory by gravely pronouncing “I have nothing to offer but blood, toil, tears and sweat.” (p. 32-33)

Second, Churchill evinced an uncanny ability to inspire his peers and the nation by remaining true to his ideals and principles.   As France faltered against the Nazi blitzkrieg in late May 1940, the prime minister conducted a private session with his top ministers and confessed to entertaining the prospect of pursuing diplomacy with Hitler to ward off a future invasion.  After immediately dismissing the idea, Churchill told his elite audience “If this long island story of ours is to end at last, let it end only when each of us lies choking in his own blood on the ground.” (p. 57) Upon hearing his impassioned plea against tyranny at all costs, the initially astonished officials rushed to his side to pledge their support and praise his resolve. The battle for the hearts and minds of his own government had been won.

Third, Churchill crafted a coherent strategy for victory.  While shaving one morning, the prime minister turned to his son Randolph and suddenly exclaimed “I think I see my way through.”  Randolph then queried “Do you mean that we can avoid defeat…Or beat the bastards?  Well, I’m all for it, but I don’t see how you can do it.”  In response, Randolph’s father offered only seven words: “I shall drag the United States in.” (p. 24-25) Concurrent to robustly enlarging the RAF, bolstering anti-aircraft defenses, ordering the bombing of Berlin to boost British morale and establishing a formidable intelligence-gathering network, Churchill steadily forged a relationship with U.S. President Franklin Roosevelt through official diplomacy and personal correspondence for the purpose of winning American aid.  In deeming the survival of Britain essential to national and international security, Roosevelt skillfully outmaneuvered isolationists in Congress and supplied Churchill with battleships in the autumn of 1940 and war materiel under the Lend-Lease Act in March 1941.  These lifelines proved crucial until the United States formally entered the war one day after the bombing of Pearl Harbor by the Empire of Japan (December 7, 1941).

Last but not least, Churchill demonstrated both the integrity of his character and his mission to protect the lives and liberties of the free world by displaying genuine, heartfelt empathy for the suffering of the British people and all those afflicted by fascist aggression.  While inspecting the damage from a Luftwaffe raid in the East End of London in September 1940 amid flames and broken bodies beneath piles of rubble, tears streamed down Churchill’s face.  An elderly woman who witnessed his profound expression, told onlookers “‘You see, he really cares; he’s crying.’” In response to another woman who screamed “When are we going to bomb Berlin, Winnie?,” the prime minister “shook his fist and snarled, ‘You leave that to me.’” (p.217-218) In fact, Churchill cried in public on numerous occasions and summoned equal amounts of courage and compassion in exerting intrepid leadership.

In The Splendid and the Vile, Erik Larson has not only produced an engaging and timely portrait of the perilous period of when Britain stood alone against Nazi Germany but has also illuminated how tragedy and loss can be turned into a triumph and justice through steadfast determination and solidarity of purpose.  As such, his new volume literally speaks volumes to the past, the present and the future of humanity.