Kevin C. O'Leary is a research fellow at the Center for the Study of Democracy at the University of California, Irvine and teaches in the Political Science Department at Chapman University.  He is the author of Madison’s Sorrow: Today’s War on the Founders and America’s Liberal Ideal. 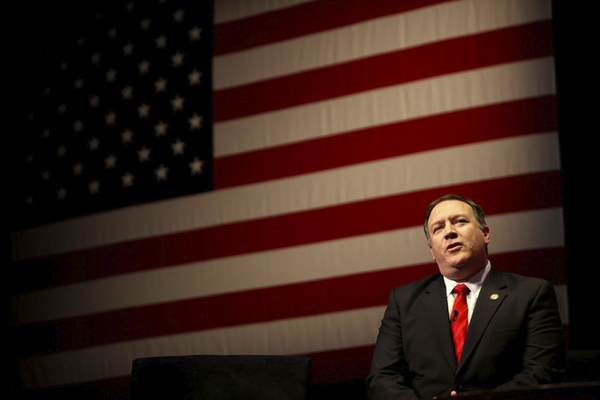 Shortly after Secretary of State Mike Pompeo had the inspector general of the State Department fired, reports surfaced that Pompeo has been quietly hosting dinners at State for the wealthy and well-connected on the taxpayer’s dime.

In the grand scheme of the abuses of power by the Trump administration, this is small beans.  More irksome is that Pompeo and his wife pompously called the affairs “Madison Dinners,” referring to how James Madison, not only the famed architect of the U.S. Constitution but also a secretary of state and president, liked to invite foreign diplomats for dinner. Pompeo and his wife, Susan, went so far as to use a template for the invitations based on James and Dolley Madison’s invitations.

Looking down from heaven, the Founding Fathers join many contemporary Americans in dismay, indignation and, yes, sorrow over what has befallen the republic during the presidency of Donald J. Trump.  About the only indignity the country has not suffered is Trump gold plating the White House and emblazoning his name across the West Wing.  A buffoon, bully, and demagogue, Trump is both an elected authoritarian and a leader incredibly inept at exercising executive power in a coherent, meaningful way.

Even the most competent and effective governments have had trouble taming and stamping out the COVID-19 pandemic. But the most incompetent nation states have been completely overwhelmed and Trump and his administration have failed in such mammoth proportions that nearly 125,000 Americans have died in just five months, double the toll of the Vietnam War which saw 58,318 Americans perish.

While the coronavirus kills thousands, Trump and his cronies continue to undermine constitutional democracy in myriad ways, large and small. Attorney General William Barr’s Department of Justice issuing a motion to dismiss the Michael Flynn case represents a major attack on the rule of law; the petite corruption of Pompeo’s Madison Dinners is a minor affront to public ethics.

Viewed from 30,000 feet, the real story is not President Trump and his ability to command attention 24/7/365 nor the misdeeds of administration officials. The real story is the attack on democracy. The most important story of this era—one that we neglect at our peril—is the Republican Party’s abandonment of conservatism and fierce embrace of illiberal reaction.

We face a political crisis because our ideological consensus—perhaps the key factor in our political success—has been shattered in a way not seen since the Civil War. Our dilemma is not a single election; it is a malignant turn by one of the two major parties. The hard-right zealots who control the Republican Party are driven by a hatred of modern liberals—such as Franklin Roosevelt, Barack Obama, and Hillary Clinton—and a hostility toward the core liberal beliefs that have steered American politics since 1776. For more than 250 years, America has been governed by a liberal-conservative consensus forged by John Locke, Thomas Jefferson, James Madison, Alexander Hamilton, George Washington, and Thomas Paine. Now reactionary extremists shred the Constitution and have launched a reactionary counterrevolution against the founders.

Neither traditionally conservative nor European fascist in nature, the Republican right can best be understood as a radical movement to remake America in the image of ungenerous and unlovely ideals. Unlike traditional liberals and conservatives (both adherents to Locke’s liberalism), reactionaries either explicitly or implicitly accept and encourage public policies that enshrine and institutionalize core illiberal values—privilege, hierarchy, inequality, and exclusion—particularly for white males and their families. These are the foundational values of the feudalism that the founders fled.

America is no longer divided into liberals and conservatives. While there are millions of traditional conservatives in the electorate, the base and elected leadership of the Republican Party is deeply reactionary. Put simply, you cannot be a conservative if you do not defend the Constitution.

Madisonian democracy works when the two major parties share similar values while disagreeing about public policy. In the past quarter century, two illiberal impulses—racism and the insatiable desire for power by the ultra rich—have captured the soul of the Republican Party. Leaving behind the values and virtues endorsed by the founders and the likes of Abraham Lincoln, Dwight Eisenhower, and George H.W. Bush, the GOP marches steadily rightward, displaying its worst aspects while deserting an honorable tradition.

For more than thirty years, the Karl Roves and Rush Limbaughs of the GOP happily taught the right to hate Washington; it should come as no surprise then that the Tea Party/Trump generation of Republicans have no respect for Madisonian democracy and the delicate checks and balances of the American constitutional system.  Madisonian politics is a wonderful system of government when the players abide by the norms of compromise and Lockean liberalism. But it also can become a system of politics in which a determined minority sows chaos and creates ongoing dysfunction if it so chooses.

The political contest is now between liberals and illiberal reactionaries. And without conservatives debating liberals in an intelligent, engaged manner to address the nation’s problems, Madisonian democracy breaks down. There is no way to bridge the stark philosophical and policy differences that exist between liberals and reactionaries. The gap is too wide, the distrust too deep.

In the multiparty systems that populate Europe, the solution would be easy. Republicans would split into two separate parties—classic conservatives in one and reactionaries in the other. Yet, because of our winner-take-all elections, the multiparty option does not exist in the United States. We are stuck with two major parties and when one party abandons the broad liberal-conservative center, the system stops working. Putting the shoe on the other foot, how would conservatives feel if suddenly liberals became Marxist-Leninists?

Madison’s sorrow is not the lavish dinners hosted by the Pompeos at the State Department. No, Madison’s sorrow—and our political pandemic—is the breakdown of democracy in America.