Turning Points and Roads Not Taken in American Foreign Policy

Roger Peace is a diplomatic historian by training, a former community college history instructor who specialized in “U.S. in the World” courses, and currently the coordinator of the U.S. Foreign Policy History and Resource Guide website. 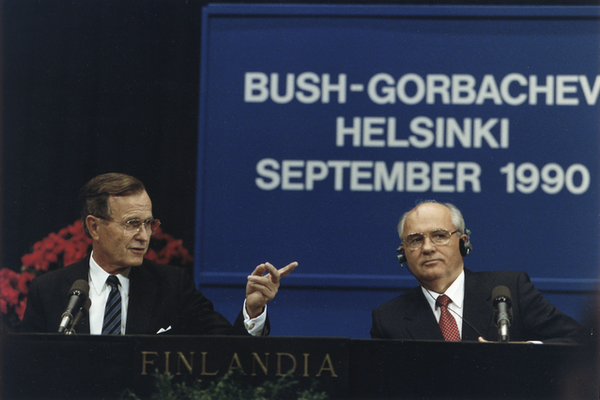 There are certain turning points in history when decisions have far-reaching and long-lasting effects.  At the domestic level, we recognize certain legislative reforms such as the Nineteenth Amendment (woman suffrage) and the Civil Rights Act of 1964 as profoundly influencing the future.

In the arena of international relations, decisions made at two key turning points over the last 75 years set the United States on its current path as unrivaled and overburdened superpower. Recent essays on the U.S. Foreign Policy History & Resource Guide website examine these turning points.

One occurred in the aftermath of World War II when decisions were made that led to the Cold War.  In hindsight, we can reflect on the wisdom or faults of those decisions.  According to the diplomatic historian Fredrik Logevall, “American planners from the start defined their policy choices vis-à-vis the Soviet Union in remarkably narrow terms, and there is little evidence they ever gave close consideration of doing otherwise.”

The events that led to the Cold War are well-known, but was it necessary?  Might U.S. leaders have achieved a détente with the Soviet Union in 1947 rather than 1972?  Might they have allowed socialist experiments in other countries rather than undermining and overthrowing left-of-center governments? What might have resulted had the U.S. put its full resources behind the United Nations and international law, as advocated by Eleanor Roosevelt, rather than circle the globe with U.S. military bases?

Another key turning point was the end of the Cold War.  On December 8, 1988, Soviet leader Mikhail Gorbachev called for the creation of a new world order based on cooperation rather than domination.  “The formula for development at another’s expense is becoming outdated,” he told the United Nations General Assembly.  “It is evident, for example, that force and the threat of force can no longer be, and should not be instruments of foreign policy.”

To the surprise of many in Washington, the Soviet Union followed through and allowed the communist governments of Eastern Europe to fall, as nonviolent revolutions swept through the region.  On December 3, 1989, President Bush met with Gorbachev in Malta.  Bush seemed upbeat after the meeting, telling reporters, “The arms race, mistrust, psychological and ideological struggle, all those should be things of the past.”

That was a good start for remaking the world order.  Yet Bush and his foreign policy team were not interested in limiting U.S. power and influence in the world; quite the opposite.  Less than three weeks after the Malta summit, U.S. forces invaded Panama in a classic “gunboat diplomacy” maneuver, denounced by the UN General Assembly as a “flagrant violation of international law.”

As the Cold War wound down, many Americans looked forward to a “peace dividend” – a transfer of funds from military to domestic programs such as health care and education.  The idea was encouraged by former Secretary of Defense Robert McNamara who testified before Congress on December 13, 1989, that the $300 billion annual Pentagon budget could be safely cut in half over the next decade.  “By such a shift,” said McNamara, “we should be able to enhance global stability, strengthen our own security and, at the same time, produce the resources to support a much-needed restructuring of the economy.”  The New York Times noted the following month, “If relations between the United States and the Soviet Union continue to improve, most Americans expect there will be a peace dividend.”

The White House was quick to throw cold water on such hopes.  A variety of new threats to U.S. national security were quickly found to replace the vanishing “communist threat.” Navy Admiral Carlisle Trost declared that the world was entering a new “era of violent peace” – a memorable oxymoron – that required the forward deployment of U.S. naval forces.

Today, we are in the midst of a grave global health crisis.  Vast resources are needed to meet the threat of COVID-19.  While much is being said and written about the lack of planning and poor decision-making in meeting the crisis, we might take a step back and look at the bigger picture of what constitutes a “threat” to our security and how our national resources should be apportioned.

Had the U.S. taken a different turn at the end of the Cold War and worked to build a friendlier international neighborhood, significant resources would likely be available to meet real threats to our security, including pandemics and global warming.  The Cost of War Project at Brown University pegs total U.S. military spending and obligations between fiscal years 2001 and 2020 at $6.2 trillion.  Moreover, had the United States redirected even ten percent of its military spending to aid developing countries and support UN agencies such as the World Health Organization, the U.S. would be far more appreciated around the world than it is today.

The Cold War and post-Cold War eras are dissected and discussed at length in the new online essays, “Cold War interventionism, 1945-1990” and “The post-Cold War era, 1989-2001.”  As with all essays on the U.S. Foreign Policy History & Resource Guide website – there are currently ten beginning with the War of 1812 – they are written for students and the general public and are accompanied by many photos and images.  The essays synthesize and build on the work of expert scholars, offer insightful analyses, and provide copious endnotes for independent examination of primary documents.  Professors, instructors, and teachers are encouraged to assign the essays, all or in part, to their students.  All essays may be downloaded in PDF format, with or without images.

The U.S. Foreign Policy History & Resource Guide is a free, open resource, non-commercial, educational website sponsored by the Peace History Society and the Historians for Peace and Democracy.