Gail Radford is Professor of History at SUNY—Buffalo and the author of The Rise of the Public Authority: Statebuilding and Economic Development in Twentieth-Century America (University of Chicago Press, 2013). 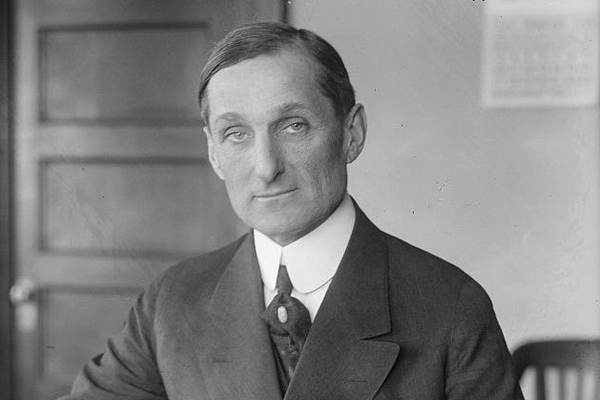 For many Americans, the idea of the president tasking his son-in-law with solving national, even international, crises, seems problematic, if not absurd. But it happened once before and turned out to be the kind of “great success story” our current first family wants us to believe in again. Slightly over a century ago, as the US mobilized for the First World War, the nation faced devastating breakdowns of its financial and transport systems. In response, President Woodrow Wilson leaned heavily on his talented and experienced Treasury Secretary, William McAdoo, who just happened to be his son-in-law. Looking back at this episode tells us a lot about what makes for successful emergency management at the highest levels of government.

Any analysis needs to start with the fact that Wilson and McAdoo had been political allies before becoming in-laws. The two shared a vision of an activist federal government that could respond to the rise of giant corporations that began to dominate the national economy in the late 19th century. Also, they shared similar personal backgrounds, both growing up in the post-Civil War South before heading north to achieve success and fame. McAdoo joined Wilson’s cabinet after a career as a lawyer-entrepreneur that turned him into a celebrity – a business executive skilled at advancing the public interest, as well as the bottom line.

McAdoo’s first business venture – a pioneering effort to convert an existing horse-drawn trolley line in Knoxville, Tennessee, into one of the country’s first electrified light-rail systems – failed when construction delays outran his credit lines. To dig himself out of debt, he moved to New York, where he worked reorganizing financially shaky railroad companies. Still a visionary risk taker eager to exploit the latest technologies, but now with greater skills, McAdoo tackled one of the greatest construction challenges of the day: drilling train tunnels under the Hudson River to replace time-consuming commuter ferries. Others had tried before, only to give up in the face of fatal accidents and crushing costs. But McAdoo’s attempt succeeded – a result of his insistence on the latest engineering advances, his ability to assemble tens of millions of investor dollars, and his expertise as a manager. The public hailed him as a hero.

As president of the Hudson and Manhattan Railway, McAdoo’s commitment to passenger service, progressive labor policies, and the larger public good only added to his charisma. The company’s motto, “Let the Public Be Pleased,” was meant to evoke the infamous response of the fabulously wealthy William Henry Vanderbilt, head of the New York Central Railroad. When confronted by rider complaints, Vanderbilt had blurted out: “The public be damned!” Asked to explain, he insisted that the sole responsibility of a business should be to its owners, not its customers, much less the larger society.

In his role as Secretary of the Treasury, McAdoo was central to passage of much of the legislation for which Wilson’s administration is remembered, most notably the Federal Reserve Act. Despite their strong working relationship, however, the President was less than elated when his widowed 51-year-old cabinet member asked for the hand of his youngest daughter, Eleanor, only 25 at the time. But Wilson reconciled himself to the match, with the wedding taking place in the White House in the spring of 1914, just months before hostilities broke out in Europe.

The war presented enormous challenges clearly within the purview of the Treasury Department. When fighting began, European investors scrambled to sell their US securities and convert the proceeds into gold. The run on US gold reserves threatened to bring down the banking system. McAdoo responded with a bold decision to close the New York Stock Exchange for four months and the dollar stabilized. To help finance the war, he staged the famous “Liberty Loan” bond drives aimed not only at raising money, but drawing it primarily from the mass public so as to dampen inflation. Each issue was oversubscribed, with over 80% of American households contributing.

With Wilson’s encouragement, McAdoo’s portfolio expanded. When German submarine warfare threatened a collapse of ocean shipping, Congress approved a scaled-back version of McAdoo’s proposal for a federally owned and managed merchant marine. The Emergency Fleet Corporation set up modernized shipbuilding facilities that used simplified designs and standardized parts to construct ships in record time. Meanwhile it provided the model for other so-called war corporations, a nimble new breed of administrative agencies by which the government could coordinate particular sectors of the economy.

Resolving the paralysis of the country’s railroads is the war achievement for which McAdoo is best remembered. With practically all rail traffic headed east to deliver soldiers and supplies for shipment to European allies, the country’s rail network literally seized up in late 1917. Trains stood waiting to be unloaded at eastern ports unequipped to deal with the volume, while agricultural producers in the South and West faced ruin for want of empty boxcars. In response, Wilson temporarily nationalized the railroads, putting McAdoo in charge. With a team of rail executives to advise him, McAdoo unsnarled the system by removing competition between the over 400 private railroad companies then in existence, responding to appeals from railway unions for better pay and working conditions, and operating the country’s quarter-of-a-million miles of rails as a single system. Meanwhile, as with ships, he instituted rationalized designs and mass production processes to deliver new rolling stock faster than previously thought possible.

What can we learn about public management in emergencies by looking at this son-in-law who stepped up so capably? There is no doubt that having a personal relationship with the President, a shared political philosophy, and similarities in background helped. Being a son-in-law probably helped, too, although the marriage came after McAdoo already had the President’s ear and trust.

But these factors would not have made McAdoo so effective without his own strengths. From his failures as well as successes, he had learned how to run investor-owned enterprises that produced value not just for owners, but for all stakeholders. His deep experience in the worlds of finance and transportation meant that he possessed what is called “domain expertise” – fine-grained, specific knowledge, not just brain-power or general business experience. And in addition to his understanding and appreciation of the private sector, he believed in government and was comfortable working within it.

Unfortunately not all sons-in-law are William McAdoos.