Why Study History? More Than Ever, a Question that Needs Answering

Peter N. Stearns is University Professor of History at George Mason University and once served as American Historical Association Vice President for Teaching. He has written widely in world and social history, with a recent book on Time in World History (Routledge); he also teaches undergraduates in both areas. Long active in the field of history of emotion he is currently working, Condorcet-like, on a book on Happiness in World History. His latest book, co-authored with Marcus Collins, is Why Study History? (July 2020). 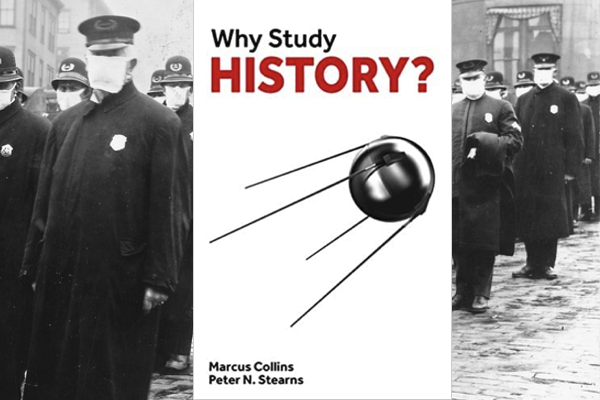 One of the few bright features of the past two months has been the extent to which the pandemic crisis has clarified the real public need for historical perspectives. Specific columns by historians have been amplified by the number of press releases incorporating historical findings (in Germany historians are even serving on reentry committees). Among many topics, here are some of the questions which require historical answers: how serious is this crisis compared to others in the past; what features of past plagues are cropping up or might crop up today (including attacks on minorities and social violence); what kinds of structural change, if any, do epidemics generate (alas the most recent overall analogue, the Spanish flu, changed almost nothing in the United States despite impressive outpourings of altruism during the crisis itself).  And of course, what seems to be novel in our present situation?

Here is ample evidence of why history is essential – which all of us historians have known all along. And coincidentally, it provides a framework in which a new effort to explain history’s blessings to interested students may be particularly timely (among other things, thanks to flexible publishers, the new book I’ve co-authored on history even includes a brief comment on the implications of the pandemic).

History departments, and historians within them, have been spending a lot of time in recent years trying to lay out the reasons that interested students should go on and major in history. Many of us, raised in earlier times when the decision seemed far less problematic, have had to put a lot more effort into this than we ever anticipated.  When my British colleague Marcus Collins and I were invited to write up the current  rationale, it seemed an ideal chance to put  the quite varied, though complementary, arguments into a form that, among other things, can be offered directly to those most concerned: students, their sometimes more difficult parents, advisors and teachers.

The resulting short book, obscurely titled Why Study History?, has just been issued by the London Publishing Partnership and may be acquired through bookstores, Amazon, etc. Because so many of us are concerned with protecting and advancing the discipline, it seems worthwhile to call this publication to wider attention -- for it is really intended to help the ongoing effort.

We try to do several things in the book. First, we very consciously combine the arguments about the skills history imparts with the really encouraging evidence about career outcomes. On the skills side we emphasize both capacities that history promotes such as writing and critical thinking, AND more distinctively historical skills such as evaluation of the phenomenon of change. The book has given us the chance to advance our thinking on these points, including some new praise for the sheer experience in dealing with ambiguity.

On the more narrowly pragmatic side, we note of course that history graduates get a wide range of jobs (teaching recruits only about 13% on both sides of the Atlantic), which superficially complicates the picture but actually adds spice. The discussion of skills is intended not only to be persuasive but to help students themselves, when they enter the job market, explain their strengths, an area where many remain somewhat deficient despite our best intentions.  We are careful to note problems: this is not meant to be a sales blitz, particularly for a discipline that contributes so much to the evaluation of fake news. Thus: history graduates end up making as much money as business majors, but less than engineers. While history really trains well in most of the skills employers seek, it lags in advancing group work. But we also take the occasion to highlight the massive expansion of the topics and methods that history programs deal with (including digital and environmental history), something that high school and even college students may not realize.

The book also deals with history’s contributions to citizenship and public understanding, which must not be forgotten amid utilitarianism. And, as Mary Lindemann kindly notes in her contribution to the cover blurb, it also “successfully conveys the joy” of doing history, something we also hoped would shine through.

Anyway, the book is available, and we truly hope it will prove useful. And, back to the introductory point, a final suggestion: maybe we should be collecting the evidence on the various uses of and appeals for history in the current crisis, as another way of invigorating the argument for relevance that our new book seeks to enhance.

Editor's note: this essay was accepted for publication prior to announcements that at least one public university is closing its history department due to financial distress; HNN is more enthusiastic than ever to promote arguments for the necessity of history in our universities and our society.