Venezuela Failed Raid: US Has a History of Using Mercenaries to Undermine Other Regimes

Members of the Venezuelan opposition have been accused of conspiring with an American private military company, Silvercorp USA, to invade Venezuela and overthrow the government of Nicolás Maduro.

In early May, the Venezuelan military intercepted a group of dissidents and American mercenaries. The Venezuelan military said it killed eight of the insurgents and captured many others. It also arrested two men it claims are former US Special Forces soldiers. No evidence has surfaced to link the US government to the recent attempted invasion – and it has denied responsibility for the incident.

Juan Guaidó, the Venezuelan opposition leader, has also denied involvement in the thwarted coup attempt. Some of his advisers who were allegedly involved in planning the mission have resigned.

The Washington Post subsequently published an agreement between members of the Venezuelan opposition and Silvercorp, including signatures of two of Guaidó’s advisers, though not Guaidó, and the chief executive of Silvercorp. The US$1.5 million (£1.2 million) contract outlined Silvercorp’s role in the invasion. One of the detained Silvercorp mercenaries made a televised confession (possibly under duress) that he was hired to capture Maduro and bring him to the US.

The incident has worsened relations between the US and Venezuela, which were already tense. In March 2020, the US charged Maduro with “narco-terrorism” and offered a US$15m reward for his capture. The Trump administration has also previously considered military options to remove Maduro from power.

These events in Venezuela echo past US secret sponsorship of private armies to overthrow governments elsewhere. The US has an extended history of sponsoring insurgents and mercenaries to undermine unwanted foreign regimes.

From Guatemala to Indonesia

In 1954 the US supported ex-Guatemalan military officer Carlos Castillo Armas in his efforts to overthrow Guatemalan leader Jacobo Arbenz. Armas was the leader of a guerilla army that was trained by the CIA of Guatemalan to invade from Honduras and Nicaragua. The CIA also hired a US company called Civil Air Transport to bomb Guatemala. Arbenz resigned under pressure and went into exile. Armas became president of a new authoritarian regime.

The American role was exposed in 1958 when the Indonesian authorities downed the aeroplane of Allen Pope, a contractor for Civil Air Transport, the company that had been involved in Guatemala. The US government tried to deny involvement, stating Pope was a “soldier of fortune” motivated by profit. But the US later quietly withdrew its plans for the forced removal of Sukarno. 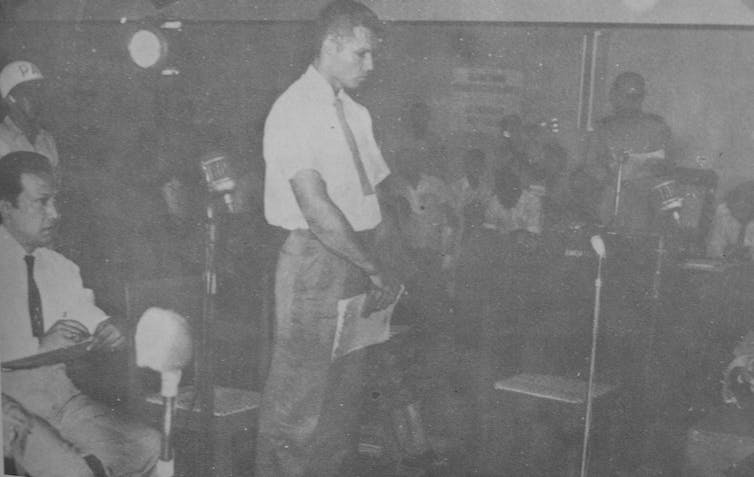 Allen Pope on trial in Jakarta in 1959. Wikimedia Commons

Bay of Pigs and Nicaragua

In 1961 the CIA tried to overthrow Fidel Castro’s government in Cuba by organising an invasion of Cuban dissidents and mercenary forces in a notorious incident known as the Bay of Pigs. According to US government documents, the CIA sponsored Cuban exiles that opposed Castro to “avoid any appearance of US intervention”. The CIA trained a Cuban insurgent force called Brigade 2506 and also hired mercenary airline companies for airborne attacks. Castro’s military defeated the US-sponsored invasion.

During the 1980s, the US also secretly hired mercenary forces to support the Contra insurgency against the socialist Sandanista government of Nicaragua. The CIA mobilised mercenaries to sabotage oil refineries and Nicaraguan ports. Later, the International Court of Justice ruled against the US for employing mercenaries to place underwater mines in Nicaraguan ports. The CIA also asked a company called Keenie Meenie Services to conduct “sabotage operations for the resistance” against the Sandanista government.

In October 1986, Eugene Hasenfus, a pilot hired by the CIA, was captured when the Nicaraguan military shot down his plane. His confessions exposed secret US arms shipments to the Contras and also helped unravel the Iran-Contra scandal, which revealed secret weapons sales to Iran in order to fund the Contras in Nicaragua in violation of US law.

More recently the US has renewed its commitment to what it calls “irregular warfare”. This includes supporting insurgents, militias and mercenaries to weaken unwanted governments, as well as in its counter-terrorism efforts.

The US has covertly supported private armed forces in countries across the Middle East in the “war on terror”. For example, in 2001 the CIA and Special Forces paid warlord factions to help remove the Taliban from power in Afghanistan. Before the US military invasion of Iraq in 2003, the US also supported militias fighting against the regime of Saddam Hussein. The US secretly trained insurgents in attempts to oust President Bashar al-Assad in Syria.

Of course, an extensive record of supporting insurgents and mercenary forces is not evidence that the US was involved in the recent events in Venezuela. But it does demonstrate that there are precedents for such activities.