The Unfulfilled Potential of Progressive Democracy after World War II

Isser Woloch is the Moore Collegiate Professor of History Emeritus at Columbia University. His most recent book is The Postwar Moment: Progressive Forces in Britain, France, and the United States After World War II (Yale U Press, 2019), from which this essay is adapted. 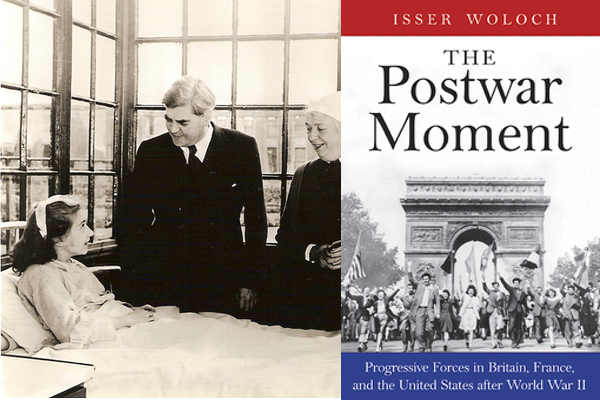 Looking back in 1999, the media pondered the twentieth-century’s most significant event. Among several credible possibilities, wise voices argued for the defeat of the Nazis -- for what kind of world would we have otherwise inhabited during the rest of the century?  Yet victory in the titanic conflicts of World War II did not in itself determine what would ensue.  In the three allied democracies -- Britain, the United States, and Resisting France  -- progressive forces girded to oppose a drift back to pre-war normalcy and to promote a transformational agenda for the postwar.  The wartime experiences of Britain, France and the U.S. of course differed profoundly, as did the trajectories of the postwar struggles in the three historic democracies. But the progressive impetus in each nation reflected a common assumption: victory over Nazism would be drained of meaning if society, economy and government at home simply slipped back into their customary pre-war ways and inequities.

Well before V-E Day, progressive impulses crystalized in three contemporaneous but independent manifestos, with comparable themes and aspirational values.  In France, the National Council of the Resistance (CNR), established in 1943,  coordinated various movements of the internal Resistance and formally linked them to General de Gaulle’s Free French in London and Algiers. In March 1944, after extensive debate, the clandestine, sixteen-member council unanimously adopted a Common Program for  post-Liberation France. In the U.S. the CIO labor federation mounted an unprecedented effort for the Democratic Party in the election of November 1944. As an inspiration, the CIO-PAC revived FDR’s earlier call for an expansion of the New Deal with an “Economic Bill of Rights” -- which the president himself had then relegated to a bottom drawer -- and infused its People’s Program for 1944 with that vision. In Britain, as the end of the wartime coalition government finally approached, the Labour Party’s long-gestating social democratic program could be launched as its manifesto, Let Us Face the Future, for the general election of June 1945, the first in ten years.

Each agenda rested on expansive visions of human dignity, equal opportunity, and social rights. Each sought to promote “full employment,” enhanced social security, decent wages for workers, and expanded trade union rights. Each insisted that a healthy democracy must regulate its economic system to promote greater productivity and a sounder distribution of wealth to undergird mass purchasing power – to increase economic growth in comparison to past performance and to better distribute its bounties.

Hanging in the balance were such matters as priorities for postwar reconstruction or reconversion; the possibilities for national planning to stimulate economic growth; extending price controls to prevent a damaging wage-price inflationary spiral; what sectors (if any) to nationalize and on what terms; trade union powers as against the prerogatives of management; the potential reach of social security benefits; the allocation of veterans benefits; the expansion of educational opportunity at various levels; and how to meet desperate needs for new, affordable housing. In the broadest terms, would the elusive ideals of greater equity and social solidarity become core democratic values?

The CNR Common Program served as a cement for France’s postwar governments, starting with de Gaulle’s provisional unity cabinet after the Liberation in 1944-45, followed by elected “tripartist” governments sans de Gaulle in 1946-47. The  new tripartist alliance of communists, socialists, and progressive social-Catholics had emerged from the wreckage of the Nazi occupation and the Vichy regime.  The tripartist years saw the nationalization of utilities, transport, and large banks; planning for industrial modernization; the expansion of social security, family allowances for children, and national health insurance; and unprecedented powers for trade unions in negotiations and over shop floor issues. The failures of tripartism included a comprehensive blueprint for educational reform in a democratic spirit that ended up on the shelf.

After its decisive electoral victory in July 1945, the British Labour Party struggled with the severe shortages of dollars to pay for imports of food and raw materials. The Attlee government used rationing and budgetary strategies to sustain “fair shares” and mass purchasing power without runaway inflation, and improvised central planning for investment in a “mixed economy.” On another track, Labour designed a comprehensive  welfare state with a National Health Service at its core, and a remarkable public housing program featuring semi-attached houses rather than high-rise towers. Labour nationalized energy, utilities, transportation, and (after prolonged hesitation) steel; insured strong trade union bargaining powers; and constantly reiterated egalitarian values, including a commitment “to raise the living standards of the people as a whole.”

In the U.S. the Truman administration and Congressional progressives fought mightily in 1945-46 for a major extension of wartime price controls to protect consumers, and for a Full Employment Bill in 1946 to assure that “every man and woman in the country who is willing to work and capable of working has the right to a job.” The bill would have instituted economic planning so that federal “investment and expenditure” might preempt any major recession.  Progressives lost both those hard-fought struggles, leaving only the G.I. Bill of Rights as a pathway to social change.  Then in the mid-term election of November 1946 the Republicans won control of Congress and focused on two policies: a “rich man’s tax cut” -- as Truman called it when he successfully vetoed the bill -- and the Taft-Hartley labor relations bill which restricted the rights of trade unions, and whose veto by Truman Congress handily overrode.

Was America, then, an exception to the postwar progressive tide in the Western democracies? The British Labour Party, at any rate, did not believe so as it celebrated Truman’s fierce campaign for an expansion of the New Deal in 1948:  “Fortunately the re-election of President Truman has shown that the American people are more progressive than most of their newspapers and Congressmen. The Fair Deal, backed by a politically conscious labor movement, is based on… moral principles which inspire our own socialism….  Over a wide field the Truman Administration and the Labour Government have the same interests and ideals – and the same enemies.”

What was true in 1948 still applies. For as historian Marc Bloch cautioned: “more or less unconsciously every national tradition of historians has elaborated its own vocabulary in which issues are problematized. Different [national] schools of historiography almost never ask the same questions.”  This is certainly true in considering the lineage of progressive forces in the three historic democracies. In the postwar moment the shapes and trajectories of progressive forces differed, but all struggled in the electoral and legislative arenas for national health care provision, affordable housing,  “full employment,” trade union power, and broader educational opportunity.  Outcomes unsurprisingly varied, but the parallel struggles should impress and inspire.

Never definitively solved in Britain, France, or the U.S., those particular issues have resurfaced time and again through changing contexts and political reversals up to the fraught present -- even as new kinds of issues (including global financialization, gross income inequality, climate change, and the erosion of democratic institutions) have begun to dominate argument in the public square.  At the moment, progressive forces suddenly seem to be laid low – the French Socialist Party at its very nadir, the Labour Party a shrunken and powerless opposition in the UK, and the Democratic Party in the U.S. momentarily stifling its left wing standard-bearers.  It is easy enough to believe, however, that progressive forces will regroup and rekindle their struggles, old and new.