Turn out the Lights: When the Last American Diplomats Fled China 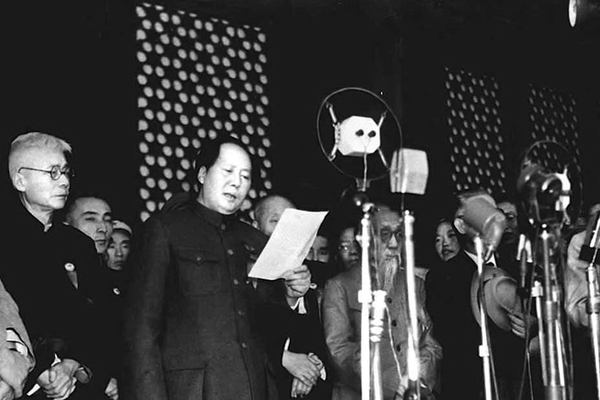 1949 stands as modern China’s watershed moment – the fateful year when Mao Zedong and the Chinese Communist Party (CCP) triumphed over Chiang Kai-shek’s ruling nationalist Kuomintang (KMT) after a long, bloody struggle in the Chinese Civil War. As a testament to the significance of this victory, last year China was awash in celebratory anniversary imagery, and the number “70” was emblazoned on walls in every city and village.

Spring 2020 marks a seventieth anniversary that’s unlikely to inspire much celebration: the last American diplomats’ humiliating departure from China. Despite U.S. attempts to engage with the CCP in 1949-50, an understanding proved impossible, and foreign service officers returned home only to face McCarthy-era persecution for having “lost” China. Fortunately for us, they recounted their experiences in detailed oral histories that are now archived at the Association for Diplomatic Studies and Training (ADST). Given the current state of heightened U.S.-China tensions, this earlier transitional period provides a cautionary tale of how misunderstandings, misplaced hopes, and missed opportunities can poison relations between great powers.

Although China and America were allies in the fight against Japan, American diplomats and military officers grumbled about KMT corruption, incompetence, and authoritarianism – concerns which carried over into the Chinese Civil War period (1945-49). At a time when Washington policymakers hoped China could be a regional stabilizing force, a defining conflict emerged: the so-called “China lobby” of influential American businessmen, missionaries, and anticommunists strongly supported the KMT, while most diplomats in China saw the KMT as an inadequate partner.

“I think all of the members of the [U.S.] embassy staff who were old China hands . . . were all disillusioned with Chiang Kai-shek,” recalled diplomat John Wesley Jones, “and [were], in fact, constantly critical and rather bitter about him and his government.”  To John A. Lacey of the U.S. Naval Group China, “The worst thing . . . was that Chiang’s generals were most interested in lining their own pockets. . . . [Chiang’s brother-in-law] T.V. Soong was well known to have milked China dry.”  A February 1948 cable to Washington from the consul general in Shanghai neatly summarized the dilemma: “Our great issue in the battle with Communism for the minds of men, as I see it, is our upholding of freedom and democracy…. How then can we back the Nanjing [KMT] regime, which obviously upholds neither?”

Communist victories in 1949 forced the issue. “This was, of course, the big question,” recalled Shanghai-based Jerome Holloway of the communists’ “liberation” of major cities. “Do you stay and try to do business with these people, or do you declare them beyond the pale and get out?” The State Department, according to Ralph Clough, worked from the theory “that the best way to make the adjustment to the new government . . . was to keep our ambassadors there so we would have some representation. We could begin a dialogue.”

Some diplomats noted the communists’ discipline. “Unlike the Nationalist forces,” concluded Lacey, the People’s Liberation Army (PLA) “would take over cities and towns and instead of raping the women and looting precious stores, they would take off their shirts and work in the fields.” Canadian diplomat Chester Ronning wrote in his diary that “the new regime shows every indication of effective administration with the old corruption eliminated. This is unheard of in China, but it is being achieved.”

Yet there were also signs that the new regime would not be so kind to diplomats. “We held on to our rights to the best of our ability,” said Shanghai-based Hendrick Van Oss, “but we really didn’t have any rights.” When the PLA entered the capital city of Nanjing, a dozen soldiers made their way to Ambassador John Leighton Stuart’s home and harangued him in his bedroom – even asserting that his furniture “would eventually go to people to whom it should belong anyway.”

In Shanghai, the new authorities arrested and roughly interrogated Vice-Consul William Olive for several days following a traffic violation. Far more damaging to bilateral relations was the case of U.S. Consul Angus Ward, who was taken hostage along with his staff in Mukden (now Shenyang) and held incommunicado for more than a year before being deported. “They stated that they didn’t recognize America or the Consulate General,” recalled hostage Elden Erickson. “They just flatly said so.”

The Sino-American gulf widened in the second half of 1949. President Truman recalled Ambassador Stuart to the U.S., Mao Zedong declared the People’s Republic, and the KMT leadership fled to Taiwan. As PRC leaders embraced the “leaning to one side” policy (yibian dao) of Soviet alignment, they applied more pressure to foreign nationals. “It was quite clear in the beginning of 1950 that [the CCP] wanted all foreigners out of the interior of China,” suggested diplomat Leonard L. Bacon. “The whole of China was going to be a closed box.”

The final event that precipitated the American departure came in January 1950, when the authorities seized U.S. consulate property in Beijing that had been granted after the Boxer Rebellion. “There was concern,” said Clough, “that… we might as well pull out [of China]. Because as long as our people were there, they were to some extent hostages.” After a difficult negotiation, in April the State Department arranged a ship to dock in the northern port city of Tianjin. The consul general in Shanghai pulled down the U.S. flag for the last time, and the remaining diplomats joined a few hundred other Americans on the northbound train. Van Oss remembered the scene at the port:

“Then we embarked…. on the tugboat which pulled two barges, loaded with the remaining evacuees. We got out over the bar into open water and there was the U.S. troop ship General Gordon waiting for us. But there was a minor storm brewing and the sea became turbulent…. We spent the night on the tug and barges and waited out the storm. Nobody had expected this, nobody had any food or warm clothing…. The women and children were below deck and practically all of them were seasick…. It was a miserable experience.

The group boarded the General Gordon the next morning. “On the ocean it felt, as people always say, like the air was cleaner, that you could breathe,” recalled Earl Wilson. “You were back in freedom.”  The ship traveled to Hong Kong, after which most passengers headed to America.

Back home, the China lobby and its allies blamed the diplomatic corps for the “loss” of China. “This was a very nervous time in Washington,” said Bacon. “Anything that could be pinned on the Democrats for having lost China was hunted down, and people who had just come out of China especially so.” Several China hands were forced out of the State Department, including John Paton Davies, John Service, John Carter Vincent, and John F. Melby. Others, including Ambassador Stuart, were closely scrutinized but kept their jobs or retired. The famed China-hand journalists Edgar Snow, Theodore White, and Jack Belden also found their careers hampered.

The outbreak of the Korean War in June 1950 ended any hopes of a modus vivendi, and Washington and Beijing would not reestablish ties until the 1970s. Today’s American and Chinese diplomats could learn much from O. Edmund Clubb’sverdict on the long estrangement:

“One doesn’t know, of course, what might have been…. [If] we had carried on a different policy … the ideal resolution would hardly have come about…. But a different solution is ordinarily possible in so complicated a situation.”