As it was 100 Years Ago, Consuming is Political in a Crisis

Mark W. Robbins is Associate Professor of History at Del Mar College and the author of Middle Class Union: Organizing the ‘Consuming Public’ in Post-World War I America (University of Michigan Press, 2017). 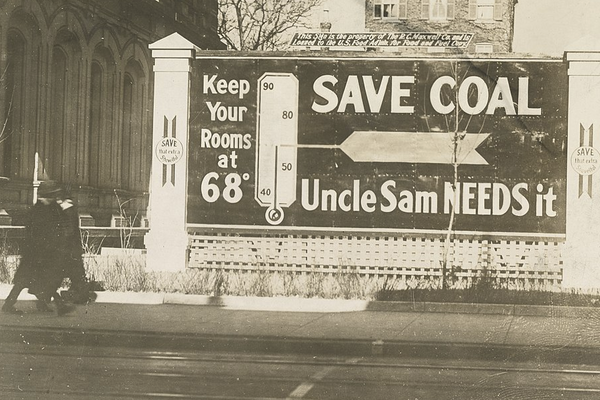 As an unprecedented global crisis took hold, a syndicated article from the New Republic News Service painted a grim picture of the consumer economy. Quoting an expert in agriculture, it lamented that prices were soaring, people were hoarding food, and supply lines were in peril. The article concluded that in order to prevent the situation from getting worse, Americans needed to come together in the spirit of “intelligent, coolheaded teamwork.” It was one of many voices to sound an economic alarm and call for mass cooperation during the crisis.

The historical moment was World War I and its tumultuous aftermath – events that took place a century before our own time. It was not only a moment of international crisis but of economic instability, in which the federal government resorted to regulating what people were allowed to buy and sell, and even what they ate for dinner. In this fragile economic environment, Americans become more politically conscious of their own and their neighbors’ consumption practices. They also kept a stronger eye on the practices of retailers down the street and across the nation. Much has been written about parallels, differences, and lessons that can be learned from the influenza pandemic of this turbulent period. Another connection can be found in how people discussed and expressed their consumer identities.

With encouragement from the federal government, World War I Era citizens worked together to combat the crisis at the point of consumption, but an uglier side accompanied these efforts. Often with insufficient evidence and sometimes driven by personal animosities, many people flooded the government with letters accusing neighbors of having too many sacks of flour, hoarding sugar, or consuming too much meat. Others accused the corner grocer of charging excessive prices to make extra money off of scarce commodities. More broadly, all too many people were quick to point fingers at German-Americans or other immigrants for working against the nation, whether as retailers or consumers.

In our own age, economic disruption has accompanied the overarching COVID-19 crisis, and Americans once again have had to alter their consumption habits. We have encountered limitations and scarcities in the purchasing of products, from eggs to soap to toilet paper. In certain localities, we have been prohibited from buying or selling non-essential items as much-needed measures to control the spread of the virus. With these changes, we have become more conscious of the consumption habits of people in our local and national communities and of the positive or negative behavior of individual retailers.

A March 14 New York Times article detailed a man’s acquisition of 17,700 bottles of hand sanitizer to be sold for inflated prices. After much public outcry, the man donated these bottles. Yet some of the outrage reportedly extended to “hate mail and death threats.” Amazon.com recently cracked down on profiteering among sellers, yet listings kept popping up for tomato sauce, peanut butter, and a number of other products at exorbitant prices. A perusal of April 18 product listings included two loaves of Wonder Bread for $19, or a 42 ounce container of Quaker Oats for $19.50. These practices have been met with deep criticism, disseminated and coordinated across digital platforms, including Twitter hashtags like #pricegouging and Facebook pages like “Price Gouging in Michigan.” Local politicians have also told residents to not needlessly shop or “buy up the grocery store.” In most cases, such attentiveness among civic leaders and community members are welcome reminders of the collaborative effort it takes to both slow the spread of the virus and to create a more just consumer economy amidst the crisis. This cooperative spirit has been reflected across communities in the establishment of pop-up “care tables” where neighbors leave valued goods such as baby wipes and formula, canned beans, and paper towels on tables outside their home for those in need. It can also be found in the creation of social media groups dedicated to posting the location and availability of scarce resources in local stores to narrow and improve community members’ success in procuring hard-to-find items.

However, it will also take vigilance to ensure that the tensions and fears that are part of being a consumer in the current crisis are not directed against racialized scapegoats as the pandemic continues. As others have noted, the branding of the 1918 influenza pandemic as the “Spanish flu” led to racist outcomes. Similarly, a number of news outlets have reported rising levels of racism directed against Asian-Americans, encouraged by certain politicians and conservative pundits labelling COVID-19 the “Chinese virus” or “Wuhan virus.” These designations cause people to blur national and racial categories in a climate of fear and anxiety.

This racism has included specific acts against Asian-Americans in the areas of retail and consumption. Recent incidents of racism reported to the Asian Pacific Policy and Planning Council and Chinese for Affirmative Action range from vandalism against a Japanese restaurant in San Francisco to people acting on stereotypes to accuse Asian-Americans of spreading COVID-19 through their alleged consumption of exotic foods. Actor and activist George Takei recalled in an April 16 tweet that even before stay-at-home orders, “Businesses in San Francisco, Chinatown were suffering because many wrongly assumed Asian Americans were all COVID-19 carriers.” An April 22 San Antonio Express-News articledescribed public outcry against a local burger chain for a marquee post, “Don’t Buy Chinese, Buy American,” a sentiment that was criticized for being xenophobic and which downplays the interdependence of today’s global supply chain.

In the immediate post-World War I period, Asian Americans encountered similar treatment. Residents and state politicians railed against supposedly “cunning” Chinese-American retailers for profiteering on the west coast, and against George Shima, the so-called California “Potato King,” for allegedly monopolizing markets. One Los Angeles resident lobbied the city council to support white-owned lunch wagons by specifically contrasting them with Asian-American food vendors. He accused “Oriental” restaurateurs of being unclean and endangering public health by serving “mysterious foods.” All too often, Americans in this era directed their economic anxieties against racially or ethnically marginalized people.

It will be important to be wary of continued expressions of consumer racism in our own time, particularly when shopping restrictions are eased. Instead, we will hope that consumer behavior across the nation will reflect a spirit of unity, social responsibility, and economic justice as the nation eventually moves toward financial recovery.