Peter Levy is a professor of history at York College (PA). His most recent book is The Great Uprising: Race Riots in Urban America During the 1960s (Cambridge University Press, 2018). 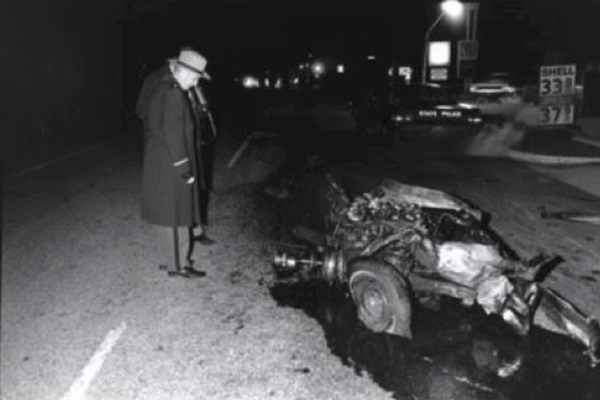 Fifty years ago, just before midnight on March 9, 1970, a bomb demolished a car carrying two young men approximately 20 miles north of Baltimore and two miles south of the courthouse in Bel Air, Maryland, where the black radical H. Rap Brown was set to go on trial the following day.

The explosion was so severe that authorities could not identify the remains of one of the car’s passengers. At first, many speculated that Brown, who was being tried for inciting a riot in Cambridge in 1967, had been in the car. It was quickly announced that Ralph Featherstone, a veteran Student Non-Violent Coordinating Committee (SNCC) activist, had been killed by the blast. Based on a small sampling of skin fragments, medical examiners subsequently identified William “Che” Payne, another SNCC veteran, as the second victim.

Almost immediately, two opposing explanations for their deaths emerged. Framing the incident as part and parcel of a wave of terrorist acts, authorities, the national media and most local news outlets cast Featherstone as a “bitter revolutionary” and uniformly concluded that Featherstone and Payne had blown themselves up with a bomb that they intended to use to disrupt Brown’s trial.

Numerous press outlets, including Time, The Washington Post and the NBC Nightly News, punctuated this interpretation of the Bel Air bombing by quoting a poem allegedly found on Featherstone’s body, which read: “To Amerika: I’m playing heads-up murder. When the deal goes down I’m gon [sic] be standing on your chest screaming like Tarzan. Dynamite is my response to your justice.”

In contrast, virtually everyone who knew them, from family members to movement colleagues, as well as the black press, insisted that Featherstone and Payne had been assassinated, perhaps inadvertently by those who sought to kill Brown. Concomitantly, they complained about the press’s coverage of the incident.

Shortly before the bombing, William Kunstler — who was serving as director of the ACLU at the time — had argued in favor of removing the trial from Bel Air because of the poisonous pre-trial coverage by the local press and evidence that hundreds of whites had begun to arm themselves. The day after the bombing, Kunstler and local black activists contended that Featherstone and his yet-to-be-identified passenger, had been victims of an “ambush laid by the KKK.”

Charlotte Orange-Featherstone, Featherstone’s wife of just a few weeks, expressed outrage over the way the white press “took the side of the police and the FBI.”  “They never talked to me,” she told the reporters from the Pittsburgh Courier, one of the nation’s most-esteemed African-American newspapers.  “They accepted the white man’s lies and they deliberately attempted to destroy Ralph’s character.”

About a year ago, making use of heretofore classified government material, especially Featherstone’s FBI files, I set out to answer the question: “Who killed Ralph Featherstone?”    While I have no definitive answer, I can say beyond a shadow of a doubt that Featherstone’s death and the media coverage of it offers a cautionary tale. This case reminds us, alongside the better-known assassination of Black Panther Fred Hampton by Chicago police with FBI complicity, of the dangers of unchecked state powers and the risk of relying on the national press to ferret out the truth about the repression of self-avowed dissidents.  Fifty years later, it is time to reopen the investigation of their deaths.

The argument that Featherstone and Payne killed themselves rested on statements made by government authorities which the national press, with very few exceptions, uncritically relayed to the public. On March 16, 1970, FBI Director J. Edgar Hoover asserted that FBI experts had concluded that the bomb had been sitting in plain sight when it exploded, which meant, according to authorities, it could not have been planted under the seat in their car.  Hoover asserted that the two had transported the bomb from Washington, D.C., and that it was “intended for use in Black extremist activities.”   Nowhere did Hoover, other state officials or the media explain how they came to these latter conclusions.  None of the documents in Featherstone’s declassified files confirm such conclusions.

In his public statements, Hoover never revealed that government agents had been monitoring Featherstone and Brown for years and that none of their investigations had uncovered evidence that they were involved in bomb-making.  Nor did Hoover explain that the FBI unsuccessfully tapped a vast network of confidential informants to ascertain the bomb’s origin.  The declassified files make clear that Hoover and other top officials cared more about protecting the secret operations of the government, particularly the existence of the FBI’s COINTELPRO program, whose mission called for “neutralizing” black extremists, which included Martin Luther King, Jr., than getting to the truth of Featherstone’s case.

Lacking direct evidence related to Featherstone’s and Payne’s intent, government officials and the national media supported their interpretation by deploying innuendo and guilt by association. Featherstone and “Che” Payne, they emphasized, had travelled to Cuba, held anti-Semitic views,  and were closely allied to Stokely Carmichael, who had recently urged “black militants to go underground.”  Numerous press outlets highlighted the “Amerika” poem they allegedly found on Featherstone’s body.

The poem, given so much weight by authorities and the media, is not on any of the FBI’s itemized lists of materials found on Featherstone’s body. Given what we now know about the willingness of the government to pen false letters and plant fake stories in its efforts to “neutralize” black activists, as described by scholars such as Wade Churchill and Kenneth O’Reilly, there is good reason to wonder if Featherstone wrote the poem.

365 days after Featherstone’s death, antiwar activists broke into the FBI’s offices in Media, Pennsylvania, where, among other things, they uncovered evidence of the COINTEL program. Several years later, reports surfaced that the Baltimore police had operated a secret program to spy on Maryland’s citizens. In the interim, the state of Maryland dropped all riot and arson charges against H. Rap Brown, in part because Bob Woodward reported that the arson charge against Brown had been “phony” all along.

Yet neither Woodward nor his future partner, Carl Bernstein, nor any other national journalist or broadcaster, followed up on Congressman John Conyers’ call for a full and impartial investigation of Featherstone’s and Payne’s death, even though a who’s who of civil rights activists from Julian Bond to Dorothy Height made the same demand. And when the Church Committee and other government investigations revealed the vast overreach of the FBI and other police agencies in the mid-1970s, it ignored, as did the press, the government’s possible complicity in Featherstone’s death, focusing instead on its wire-tapping of Martin Luther King, Jr. and other more mainstream figures.

Given the doubts expressed by many of Featherstone’s and Payne’s colleagues about the cause of their deaths, the laxity of the contemporary investigation, and ongoing revelations about government complicity in the assassination of a wide array of civil rights activists, their case deserves to be re-opened. In the least, doing so will shed further light on the dangers of unchecked government agencies and the shortcomings of the fifth estate.