Commemorating the 150th Anniversary of the 15th Amendment

Alan Singer is a historian and chair of the Hofstra University Department of Teaching, Learning and Technology. He is the author of New York's Grand Emancipation Jubilee: Essays on Slavery, Resistance, Abolition, Teaching, and Historical Memory (Albany, NY: SUNY Press, 2018). Follow Alan Singer on Twitter: https://twitter.com/ReecesPieces8 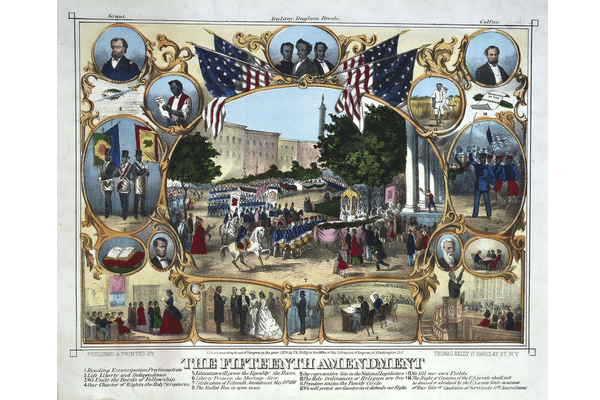 February 2020 is the 150th anniversary of the 15th Amendment to the United States Constitution declaring “The right of citizens of the United States to vote shall not be denied or abridged by the United States or by any State on account of race, color, or previous condition of servitude.” The amendment also empowered Congress to enforce the mandate by “appropriate legislation.” In his latest book, The Second Founding: How the Civil War and reconstruction Remade the Constitution (Norton, 2019), Eric Foner argues that the 15th Amendment was the third and final of the post-Civil War Reconstruction amendments radically redefining the United States, ending slavery, defining the rights of citizens, establishing federal supremacy, requiring state governments to abide by national laws and norms, and prohibiting states from preventing newly freed African American men from voting because of “race, color, or previous condition of servitude.” Much of this essay draws from Foner’s book.

The 15th amendment passed Congress on February 26, 1869, was ratified by the required number of states on February 3, 1870, and was certified as approved on March 30, 1870. Passage of the amendment was cheered by African Americans and abolitionists and President Ulysses S. Grant called it “a measure of grander importance than any other one act of the kind from the foundation of our free government to the present day.”

The 15th amendment had a contentious approval process and since then has had a rocky history. Republicans largely supported the measure for political reasons, assuming black male voters would back their party and keep it in power. The House of Representatives voted 144 to 44 in favor of the Amendment, with 35 abstentions and no member of the Democratic Party in support. It passed in the Senate by 39 to 13, with 14 abstentions, and zero Democratic votes. Since approval in each branch of the legislature required a 2/3 vote, the amendment only passed because abstentions did not count as negative votes.

Opposition to the amendment came from both the “right” and the “left.” Many white Americans who accepted the legitimacy of an end to slavery, did not accept the idea of granting political equality to newly freed blacks. Even if the freedman were recognized as citizens by the 14th Amendment, citizenship did not automatically include the franchise. Adult women still could not vote. More radical Republicans wanted a wide-ranging ban on suffrage limitations, but a broader amendment was rejected. Abolitionist Senator Charles Sumner from Massachusetts abstained from voting on the final text of the 15th Amendment because of this. Debate over the amendment caused a split between many white female suffragists and the former abolitionist movement. While Lucy Stone and the American Woman Suffrage Association did support the amendment, Susan B. Anthony and Elizabeth Cady Stanton thought granting the right to vote to black men but not to black and white women was a betrayal of women’s rights.

On March 1, 1869, Nevada became the first state to endorse the 15th Amendment. Former Confederate states that still had Reconstruction governments approved it. New York ratified the amendment on April 14, 1869, tried to revoke ratification in January 1870 when power shifted in the state legislature, and then re-ratified in in March after it had already been approved by the required 3/4th of the states. Tennessee did not approve the amendment until 1997.

New Jersey initially voted against the amendment and did not approve it until February 15, 1871, almost a year after it went into affect. However, the first African American man to vote under provision of the 15th Amendment was a New Jerseyan, Thomas Mundy Peterson, in Perth Amboy, on March 31, 1870.

Approval of the Fifteenth Amendment set off a wave of celebration in African American communities. On April 9, 1870, under the headline “Free and Equal,” the New York Times reported on “Our Colored Citizens’ Jubilee - Celebration in Honor of the Fifteenth Amendment – Imposing Procession – Demonstration at Cooper Institute.” According to the article:

The colored population of the City turned out en masse yesterday afternoon in order to celebrate the ratification of the Fifteen Amendment. The line of march of the procession has already been published, and the various streets designated were lined with the colored people of both sexes. The only changes made in the procession were in substituting Thirty-second for Thirty-fourth-street and in having the speech-making at Union-square instead of in front of the Cooper Institute. No interruptions except in the nature of ill-mannered criticisms occurred to mar the good order characterizing the whole celebration, and the affair reflected great credit on those most immediately interested. A noticeable and praiseworthy tribute of respect was paid to the ‘Father of his country,’ as each and all of those in the line reverently raised their bats as they passed the bronze equestrian statue at Union-square. About 5,000 men were in the line.

The keynote speaker at Union Square in Manhattan was the Reverend Henry Highland Garnet, a leading black abolitionist, who compared this celebration with the horrors of the 1863 draft riots when black men were lynched in the streets of New York. Garnet told the crowd, “I have labored for over a third of a century in the cause of freedom. And my heart swells with joy as I look on this assembly and say ‘Fellow-Citizens.’ Many had lost faith that this day would ever come. In this consummation of all their labors and trials they see how rapid has been the progress of the American people in the cause of freedom.” Garnet also later spoke at the Cooper Institute rally.

On April 22, 1870, Frederick Douglass addressed the significance of the Fifteenth Amendment at a celebration in Albany, New York. A triumphant Douglass proclaimed that withthe suffrage amendment “The black man is free, the black man is a citizen, the black man is enfranchised, and this is by the organic law of the land. No more a slave, no more a fugitive slave, no more a despised and hated creature, but a man, and, what is more, a man among men . . . The curtain is now lifted. The dismal death-cloud of slavery has passed away. Today we are free American citizens. We have ourselves, we have a country, and we have a future in common with other men.”

Unfortunately, soon after it went into affect, the Supreme Court began to limit the amendments scope. In United States v. Reese (1876) the Court declared the Enforcement Act of 1870 unconstitutional and ruled that the Fifteen Amendment did not grant an absolute right to vote. The Court approved supposedly “race-neutral” state laws that severely restricted Black suffrage such as poll taxes and literacy tests with exception if a grandfather had been a registered voter. It was not until passage of the Voting Rights Act of 1965, almost ninety years later, that the federal government took steps to protect the voting rights of African Americans encoded in the Fifteenth Amendment. However, in 2013 a crucial provision of the Voting Rights Act, that states with a history of voter restriction based on race receive prior approval from the federal government before changing voting rules, was thrown out by a Supreme Court dominated by Republican appointed justices. This decision unleashed a wave of voter suppression by Republican dominated state governments.

Teaching material on the 15th Amendment is available from the Zinn Education Project.