On the 100th anniversary of the Negro Leagues, a look back at what was lost

On the 100th anniversary of the Negro Leagues, a look back at what was lost 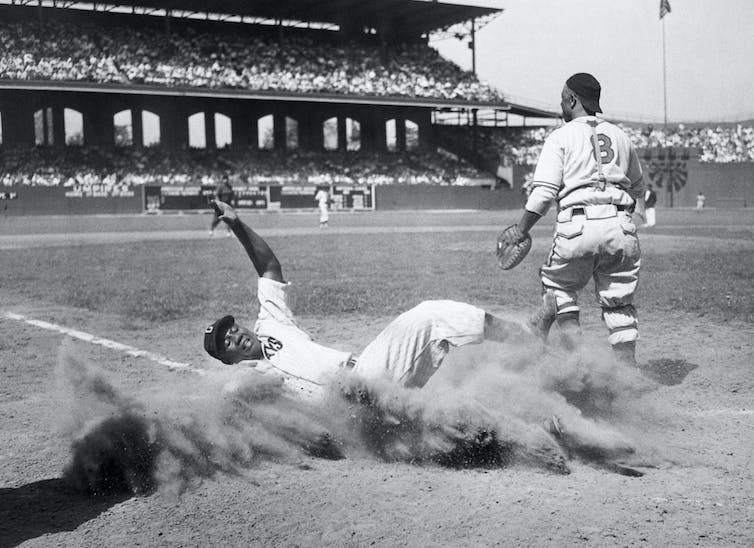 During the half century that baseball was divided by a color line, black America created a sporting world of its own.

Black teams played on city sandlots and country fields, with the best barnstorming their way across the country and throughout the Caribbean.

A century ago, on Feb. 13, 1920, teams from eight cities formally created the Negro National League. Three decades of stellar play followed, as the league affirmed black competence and grace on the field, while forging a collective identity that brought together Northern-born blacks and their Southern brethren. And though Major League Baseball was segregated from the 1890s until 1947, these teams played countless interracial games in communities across the nation.

After World War II, Jackie Robinson hurdled baseball’s racial divide. But while integration – baseball’s great experiment – was a resounding success on the field, at the gates and in changing racial attitudes, Negro League teams soon lost all of their stars and struggled to retain fans. The teams hung on for a bit, before eventually folding.

Years ago, when I worked on a documentary about the Negro Leagues, I was struck by how many of the interviewees looked back longingly on the leagues’ heyday. While there was the understanding that integration needed to happen, there was also the recognition that something special was forever lost.

A league of their own

Given the injustices of the 1890s – sharecropping, lynchings, disenfranchisement and the Supreme Court’s sanctioning of segregation in Plessy v. Ferguson – exclusion from Major League Baseball was hardly the most grievous injury African Americans suffered. But it mattered. Their absence denied them the chance to participate in a very visible arena that helped European immigrants integrate into American culture.

While the sons of white immigrants – John McGraw, Honus Wagner, Joe DiMaggio – became major leaguers lionized by their nationalities, blacks didn’t have that opportunity. Most whites assumed that was because they weren’t good enough. Their absence reinforced prevailing beliefs that African Americans were inherently inferior – athletically and intellectually – with weak abdominal muscles, little endurance and prone to cracking under pressure.

The Negro Leagues gave black ballplayers their own platform to prove otherwise. On Feb. 13, 1920, Chicago American Giants owner Rube Foster convened a meeting at the Paseo YMCA in Kansas City to organize the Negro National League. A Texas-born pitcher, Foster envisioned a black alternative to the major leagues. 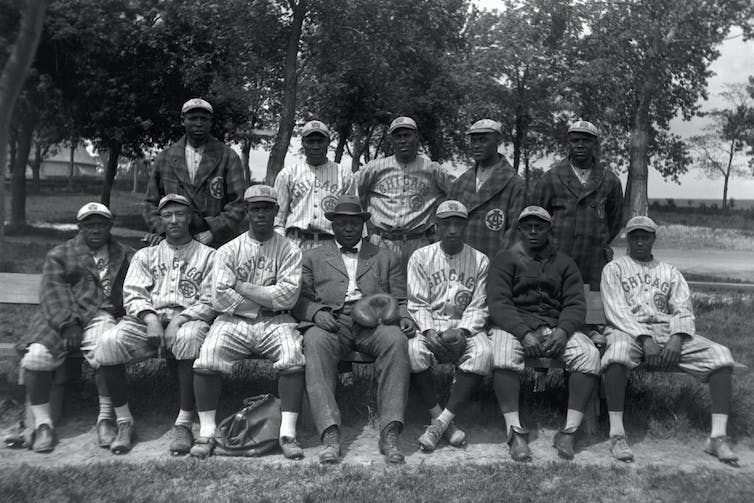 Members of the Chicago American Giants pose for a team portrait in 1914. Rube Foster is seated in the center of the first row wearing a suit. Diamond Images/Getty Images

Northern black communities were exploding in size, and Foster saw the league’s potential. Teams like the American Giants and the Kansas City Monarch regularly competed against white teams, drew large crowds and turned profits. Players enjoyed higher salaries than most black workers, while black newspapers trumpeted their exploits, as did some white papers.

But the Negro National League’s ascent was stunted after Foster was exposed to a gas leak, nearly died and suffered permanent brain damage. Absent his leadership and hammered by the Great Depression, the league disbanded in 1931.

Gus Greenlee, who ran the popular lottery known as the numbers game, revived the league in Pittsburgh in 1933 after a sandlot club called the Crawfords, which included the young slugger Josh Gibson, approached him for support. He agreed to pay them salaries and reinforced their roster with the addition of flamethrower Satchel Paige.

Greenlee went on to build the finest black-owned ballpark in the country, Greenlee Field, while headquartering the Negro National League on the floor above the Crawford Grill, his renowned jazz club in Pittsburgh’s Hill District.

Pittsburgh soon became the mecca of black baseball. Sitting along America’s East-West rail lines, the city was a requisite stop for black entertainers, leaders and ball clubs, which traveled from cities as far away as Kansas City. Its two teams, the Homestead Grays and Pittsburgh Crawfords, won a dozen titles. Seven of the first 11 Negro Leaguers eventually inducted into the National Baseball Hall of Fame – stars like Cool Papa Bell, Oscar Charleston, Josh Gibson, Buck Leonard and Satchel Paige – played for one or both squads.

The sport, meanwhile, became a major source of black pride.

“The very best,” Pittsburgh-born author John Wideman noted, “not only competed among themselves and put on a good show, but [also] would go out and compete against their white contemporaries and beat the stuffing out of them.”

“There was so much [negativity] living over [us] which we had no control [over],” Mal Goode, the first black national network correspondent, recalled. “So anything you could hold on to from the standpoint of pride, it was there and it showed.”

For Major League Baseball, no moment was more transformative than the arrival of Jackie Robinson, who, in 1947, paved the way for African Americans and darker-skinned Latinos to reshape the game.

But integration destroyed the Negro Leagues, plucking its young stars – Willie Mays, Henry Aaron, Roy Campanella and Ernie Banks – who brought their fans with them. The big leagues never considered folding in some of the best black teams, and its owners rejected the Negro National League owners’ proposal to become a high minor league.

Like many black papers, colleges and businesses, the Negro National League paid a price for integration: extinction. The league ceased play after the 1948 season. Black owners, general managers and managers soon disappeared, and it would be decades before a black manager would get a chance to steer a major league ballclub.

Major League Baseball benefited from talent cultivated in the Negro Leagues and on the sandlots that sustained the sport, especially in inner cities. But when those leagues crumbled, prospective black pros were relegated to minor league teams, often in inhospitable, southern cities. Many Negro League regulars simply hung up their cleats or played in the Caribbean.

The playwright August Wilson set his play, “Fences,” which tells the story of an ex-Negro Leaguer who becomes a garbageman in Pittsburgh.

“Baseball gave you a sense of belonging,” Wilson said in a 1991 interview. At those Negro League games, he added, “The umpire ain’t white. It’s a black umpire. The owner ain’t white. Nobody’s white. This is our thing … and we have our everything – until integration, and then we don’t have our nothing.”

The story of African Americans in baseball has long been portrayed as a tale of their shameful segregation and redemptive integration. Segregation was certainly shameful, especially for a sport invested in its own rhetoric of democracy.

But for African Americans, integration was also painful. Although long overdue and an important catalyst for social change, it cost them control over their sporting lives.

It changed the meaning of the sport – what it symbolized and what it meant for their communities – and not necessarily for the better.

[ You’re smart and curious about the world. So are The Conversation’s authors and editors. You can read us daily by subscribing to our newsletter. ]