If the Pentagon is worried by climate change, shouldn’t we be worried too?

David Carlin works on Climate Change for the UN Environment Program’s Finance Initiative (UNEP-FI). He leads a global project to help banks understand and assess the risks and opportunities brought about by Climate Change. 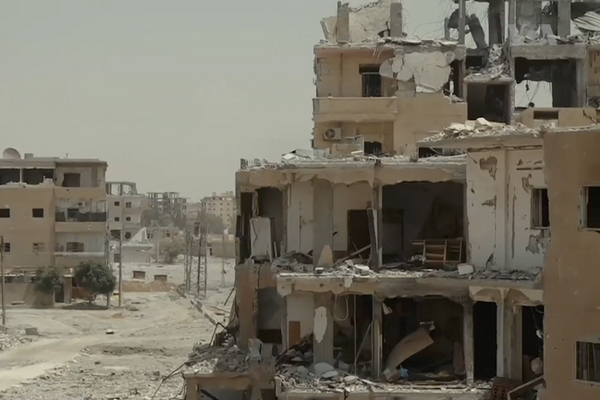 Damage after the battle of Raqqa in the Syrian Civil War, 2017

In 2008, Syria’s representative to the UN’s Food and Agriculture Program, Abdullah Bin Yehia, made an urgent request for agricultural aid. Since 2006, Syria had been gripped by its worst drought in centuries. Acres of productive land had turned to dust and farmers were losing hope. The drought, rapid population growth, an influx of refugees from war-torn Iraq, and the global economy created what Yehia called a “perfect storm.” A meager $20 million in aid would help keep Syrian farmers on their land and growing essential crops. However, Yehia received only token assistance from the international community.

Yehia was forced to focus his aid request on the hardest hit areas, specifically “small-holding farmers in northeast Syria in an effort to preserve the social and economic fabric of this rural, agricultural community.” A US diplomatic cable warned “Yehia predicts mass migration from the northeast, which could act as a multiplier on social and economic pressures already at play and undermine stability.” The situation raised alarm at the highest levels of the Syrian government and the Agriculture Minister publicly declared that the drought’s economic and social fallout was “beyond our capacity as a country to deal with.”

Although the United States was spending over $100 billion annually waging a war in neighboring Iraq, America was remarkably tightfisted when it came Syrian farmers. Rejecting Yehia’s increasingly desperate requests, the State Department responded, “given the generous funding the US currently provides to the Iraqi refugee community in Syria we question whether limited US government resources should be directed towards this appeal.” The Syrian farmers were on their own.

By 2010, the drought had thrown almost 3 million Syrians into extreme poverty and devastated agricultural production. Fields throughout northern Syria were abandoned. Nearly 1.5 million rural farmers migrated to cites like Aleppo, Homs, and Damascus in search of jobs that did not exist. Internally displaced persons comprised 20% of the Syrian population, a staggering proportion in peacetime. The shattered social fabric, lack of economic opportunity, and disgruntled urban arrivals created a tinderbox. Soon, the Arab Spring provided the spark that set Syria aflame.

Climate-induced drought contributed to this explosive situation. As the world warms, Syria offers a cautionary tale about how climate change may destabilize societies and sow global chaos.

Northern Syria lies within the ancient Fertile Crescent, which historians call “the cradle of civilization.” Agriculture was first developed there over 10 thousand years ago. Ironically, the place that has produced food for longer than anywhere on earth now finds itself barren.

In modern Syria, human activities have greatly exacerbated longstanding issues of water scarcity. The country’s population boomed from 4 million in the 1950s to over 22 million today. Greater water needs coupled with resource mismanagement by the Syrian government have worsened water shortages. Since the 1980s, government policies incentivized farmers to plant export crops like wheat and cotton that were particularly water-intensive. In addition, poor irrigation methods have wasted large quantities of water and further depleted freshwater aquifers. Syrians have also felt the effects of water diversion programs in upstream Turkey, which have reduced the flow of the Euphrates river into Syria.

Drought has always lurked behind these local stressors. When the rains stop, the reservoirs fall, the streams dry, and farmland turns to dust. That specter has grown far more menacing in recent years. In 2010, the Syrian Environmental Association reported that droughts have grown more frequent from “once every 55 years, to every 27 years, to every 13. Now, droughts happen every 7 or 8 years.” The drought that began in 2006 was particularly horrendous. NASA researchers determined it was the worst one Syria had experienced in 900 years and perhaps far longer. Five years of severe drought obliterated the nation’s agricultural sector as over 75% of Syria's farms failed and 85% of Syrian livestock died.

Climate scientists have identified a clear link between the climate change and a drier, hotter Middle East. Climate change makes droughts more frequent and more severe. A report in the International Journal of Climatology found “consistent warming trends since the middle of the 20th century across the region.” A study in the Proceedings of the National Academy of Sciences examined trends in “precipitation, temperature, and sea-level pressure” and corroborated them with climate models to conclude that human-induced global warming made a severe drought in Syria (like the one in 2006) “2 to 3 times more likely than by natural variability alone.” Climate alone did not cause the conflict in Syria, but it surely turned up the heat.

The Syrian Civil War enters its 10th year with no end in sight. What began with protests against Bashar al-Assad has morphed into a hellish multisided struggle of international proxies and religious extremists. In 2016, the UN human rights chief called the war "the worst man-made disaster since World War II.” He continued: "the entire country has become a torture chamber, a place of savage horror and absolute injustice.”  Ceaseless fighting has claimed 500,000 lives and displaced 12 million people. Over 5 million Syrian refugees have sought shelter abroad. The migration of refugees has increased pressure on neighboring states, including Lebanon, where 25% of people within its borders are Syrian. Further away in Europe and America, the refugee crisis has infected the political discourse and provided fuel for populist demagogues.

Syria provides a frightening narrative for conflicts in an overheated world. The 2006 climate-induced drought crippled Syrian agriculture and contributed to a wave of internal migration. These events amplified existing social and economic tensions beyond the capacity of Assad’s regime to address them.

Although few politicians speak openly about the role of climate change in geopolitics, the US military has studied the topic for years. A 2007 Pentagon report called climate change “a threat multiplier for instability in some of the most volatile regions of the world.”

The 2007 Pentagon report also argued that “many developing nations do not have the government and social infrastructures in place to cope with the type of stressors that could be brought about by global climate change.” Furthermore, “when a government can no longer deliver services to its people, ensure domestic order… conditions are ripe for turmoil, extremism and terrorism to fill the vacuum." Analysts anticipated that even stable nations would be taxed as huge numbers of refugees arrived at their borders. This forecast sounds eerily like a script for Syria’s collapse just 4 years later.

Pentagon assessments of future climate hotspots read like dystopian fiction. Fragile nations across Africa and Asia are battered by worsening climate-related impacts from crop failures to massive flooding. Weakened regimes fall victim to ethnic divisions and civil unrest. Diplomatic cooperation breaks down as countries battle for increasingly scarce resources. Wars and insurgencies spill over into neighboring states. In a globalized world, disturbances are impossible to confine: terrorism and political ideology can be exported far and wide.

Climate scientists and security experts are already collaborating to identify these hotspots before they erupt in chaos. The Dutch Water, Peace, and Security Partnership has created a tool to predict conflicts based on levels of water stress. By 2050, the UN estimates nearly 5 billion people may face water shortages. Researchers at ETH in Zurich have demonstrated strong relationships between food prices and local conflicts. By 2050, the UN estimates that food production needs to rise by 60%. Climate change will increasingly threaten water supplies and food production, creating new conflict hotspots.

Even America’s own military capabilities are at risk from climate change. A 2018 Department of Defense report indicated that over half of US bases and installations were vulnerable to climate-related impacts. That year, Hurricane Michael caused over a billion dollars in damage to US military assets.

The Pentagon is preparing for a world on fire: a world that is far more dangerous, unpredictable, and violent that the one we currently inhabit. There will be more Syrias, more states that are pushed over the edge by climate change. Regional tensions can erupt into global conflicts.  If the Pentagon is worried by climate change, shouldn’t we be worried too?

Related Link: A History of Climate Change Science and Denialism