Even for an air pollution historian, these past weeks have been a shock

Even for an air pollution historian like me, these past weeks have been a shock 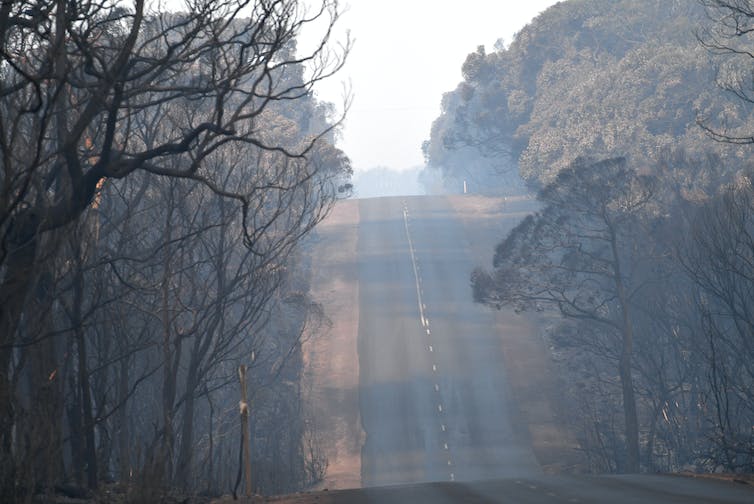 Throughout history, Australian bushfires have spread smoke over our cities. But this time it’s different. David Mariuz/AAP

Smoke from this season’s bushfires has turned the sun red, the moon orange and the sky an insipid grey. It has obscured iconic views tourists flock to see. Far more than an aesthetic problem, it has forced business shutdowns, triggered health problems and kept children indoors for weeks.

City dwellers in southeast Australia have been forced to take a crash course in the finer points of air pollution. We’ve learned about the dangers of inhaling tiny PM2.5 particles (those 2.5 microns or fewer in diameter). We’ve learned that only a close-fitting P2 mask will do much to protect us.

Still, we wear disposable paper masks and hold handkerchiefs to our faces, hoping any amount of filtering is helpful. 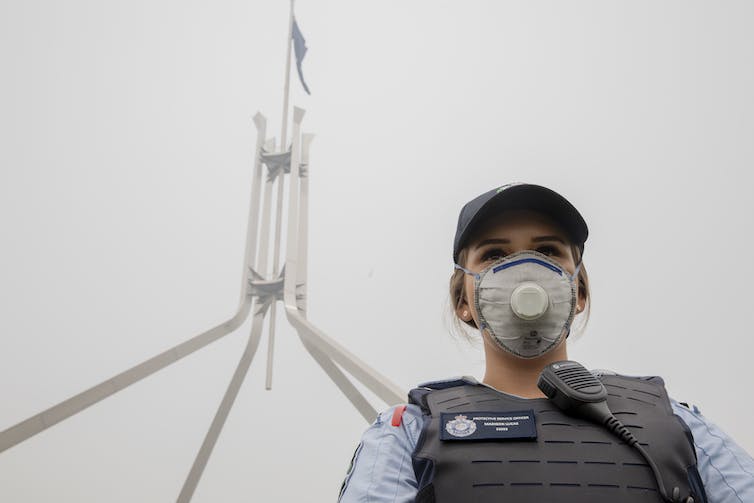 A police officer wears a mask while on duty at Parliament House in Canberra. NARENDRA SHRESTHA/AAP

Even for an historian of air pollution like me, this situation is a shock. It is not the first time Australia’s major cities have been shrouded in bushfire smoke. But the terrible air quality is unmatched in terms of severity, duration and extent.

Historically, air pollution from smoke was considered outside human control and not subject to regulation. But these bushfires are clearly linked to global warming, for which government, corporations and individuals are responsible. It’s time to rethink the way we protect air quality.

The history of smoke

In recent weeks, apps such as AirVisual have confirmed what we city dwellers can already see and smell: since the fires on the north coast of NSW began in late October, our air quality has plummeted.

The New South Wales government’s Air Quality Index data has shown that since late October, days when the index was higher than 100 – signalling exposure is unhealthy – have outnumbered clear days in Sydney, Newcastle and the Illawarra.

Smoke emissions from the Australian bushfires from 1 December 2019 to 4 January 2020.

Index readings above 2,550 have been recorded in Sydney, while the Monash monitoring site in Canberra reached a choking 5,185 at 8pm on New Year’s Day.

Bushfire smoke has affected the cities of NSW and the Australian Capital Territory in the past. In late January 1926, when Canberra was just emerging as a city, a thick haze of smoke sat over the site. Fires came within metres of Yarralumla, the residence which, the following year, would become home to the Governor-General.

In several years in the mid 1930s, bushfires burning to the north of Sydney left the city air thick with smoke. In October 1936, bushfire smoke forced a motor liner arriving from Hong Kong to warily enter the harbour sounding its siren, because it was invisible to signallers on South Head.

A New Zealand pilot, flying into Sydney from Longreach the following month, had to fly blind in “great clouds of dense smoke” covering much of NSW. In 1939, Canberra was covered by what visiting writer HG Wells described as a “streaming smoke curtain”.

Read more: How wildfire smoke affects pets and other animals

In the summer of 1944, Sydney was again enveloped in a smoke haze, this time from fires in the Blue Mountains and (later Royal) National Park in November. Photographs published at the time show the Sydney Harbour Bridge barely visible through dust and smoke at midday. The ongoing fires were blamed for an increase in diseases of the ears, nose and throat, and for cases of influenza and pneumonia, leading to a shortage of hospital beds. 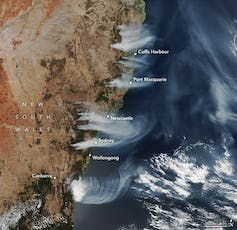 In November 1951, all of NSW was said to be blacked out by bushfire smoke. In Sydney on the worst days, records show all four of the city’s airfields were closed because of “smoke-fog”.

In each of these episodes, bushfire smoke disrupted transport, commerce, health and the enjoyment of the urban environment. But even as other forms of air pollution began to be regulated, smoke from bushfires escaped legislative attention.

What was understood as air pollution were the unwanted byproducts of industrial processes, whereas bushfire smoke was viewed as natural.

In NSW in 1866, an act based on British legislation restricted smoke from mills, distilleries and gas works. Further limitations on smoke production in built-up areas were included in later acts governing public health (1902), motor traffic (1909) and local government (1919).

After World War II Newcastle, the site of the country’s largest concentration of coal-burning heavy industry, began to pay closer attention to managing air quality. This pioneering work was given added urgency after 4,000 people died in heavy London smog in 1952. 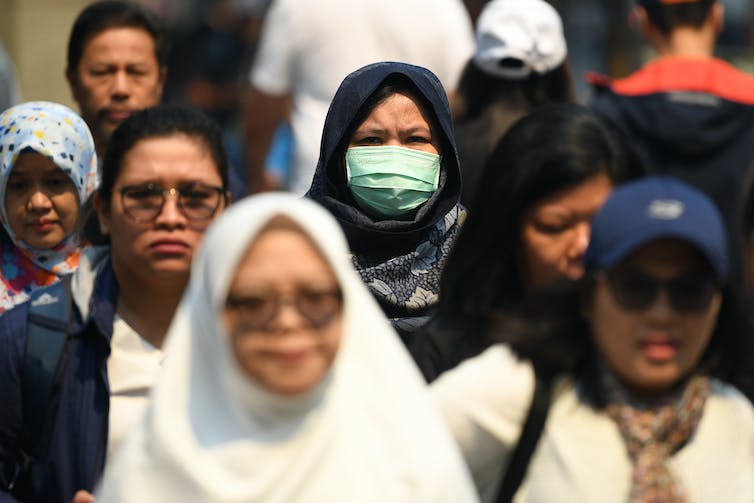 In 1958, a NSW parliamentary committee delivered a report into smoke abatement. It did not mention recent issues with bushfire smoke, and also dismissed the impact of domestically produced smoke. The subsequent 1961 Clean Air Act focused on air pollution from industry, transport and power generation.

Air pollution legislation continued to evolve in following decades, targeting motor vehicle emissions in the 1970s, backyard burning of waste in the 1980s, and wood fires used to heat homes in the 1990s.

These measures have been successful. A 2006 study found that between 1998 and 2003, on the limited occasions when standards for PM10 in six Australian cities were exceeded, the main sources were not industry or transport, but dust storms and bushfires (with the exception of Launceston, where heating fires were the main contributor). 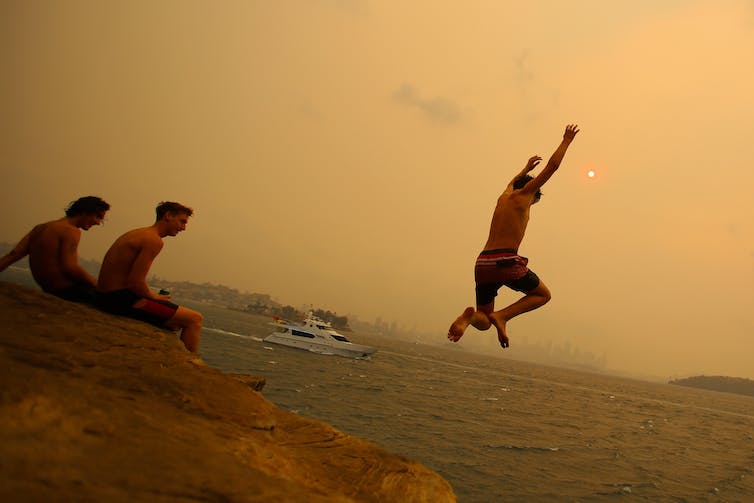 A young man jumps from a rock in Sydney during smoke haze. Steven Saphore/AAP

Today, bushfire smoke is excluded from air quality regulations, despite its obvious role in pollution. It is still considered natural, and beyond human control.

However the link between the current fires and human-caused climate change, long predicted by climate scientists, suggests this exemption is no longer valid.

Read more: Our buildings aren't made to keep out bushfire smoke. Here's what you can do

As the Australian National University’s Tom Griffiths has written, the current fires in some ways repeat patterns of the past. But “the smoke is worse, more widespread and more enduring”.

When Australia begins the recovery from these fires, our business-as-usual approach requires a rethink. Measures to protect air quality should be a major part of this.

It is time that corporations, governments and societies which contribute to global heating be held to account for more frequent, intense and widespread bushfires, and the smoke which billows from them.