Memo from a historian: White ladies cooking in plantation museums are a denial of history

Memo from a historian: White ladies cooking in plantation museums are a denial of history 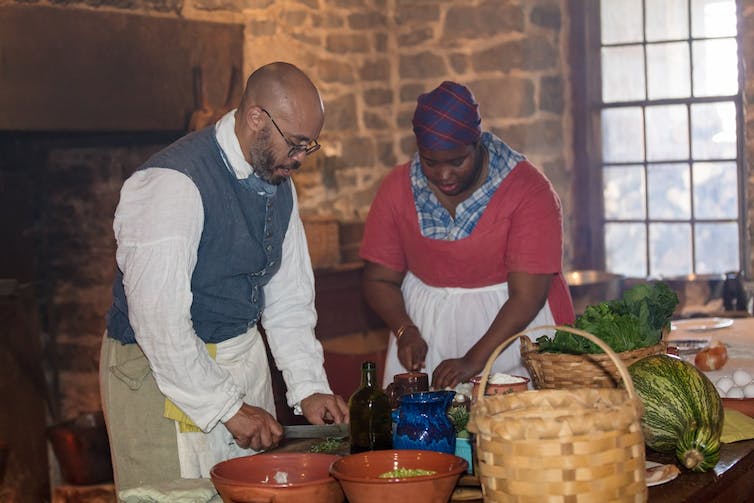 Fall is almost gone and winter is coming, as are hundreds of hearth cooking demonstrations at countless historic homes and plantations throughout the nation.

Like an automated clock, historic kitchens become the center stage for historical storytelling at this time of year.

In New England, these stories sit firmly in the mythos of Thanksgiving, focusing on sterilized versions of the 1621 feast between Pilgrims and Wampanoag. In the mid-Atlantic, these stories blend their Amish, German and Dutch roots to talk about Colonial fare in early America.

But while these two regions must always deal with issues of accuracy, the South’s historic sites have remained locked in a myth of their own.

I spent a decade researching and writing about enslaved plantation cooks and lecture on the topic at historic sites. Typically, my lectures include a cooking demonstration organized by my hosts.

This kind of programming provides a dynamic glimpse into this particular history, and allows the guests to witness hearth cooking, smell the food, feel the heat of the fire and engage in conversations with a living history interpreter. As a scholar committed to public education about this subject, I believe such demonstrations can be evocative and inspire a contemplative visitor experience.

But out of the dozens of programs I have participated in, with costumed historical interpreters, only three have staffed the kitchen with someone depicting an African American cook. The rest of the cooks have all been white.

These historic kitchens have power as a stage for historical interpretation and learning, and it is lost when those telling the first-person stories are not representative of those who once cooked there.

Imagine showing up to Plimoth Plantation, a 17th-century living history museum in Massachusetts focusing on the region’s native “Wampanoag People and the Colonial English community in the 1600s,” only to find first-person interpreters portraying the 19th-century Lewis and Clark expedition. Or imagine visiting the Jamestown Settlement and seeing women portraying the original 1607 colonists, all of whom were men or boys.

Yet at historic sites across the South, you’ll often find a white woman, dressed in Colonial clothes, cooking in a big house kitchen.

As a scholar of southern plantation history and the director of educational programming at Stratford Hall, the historic plantation home of the Lee family of Virginia, I know that this image is a false one. 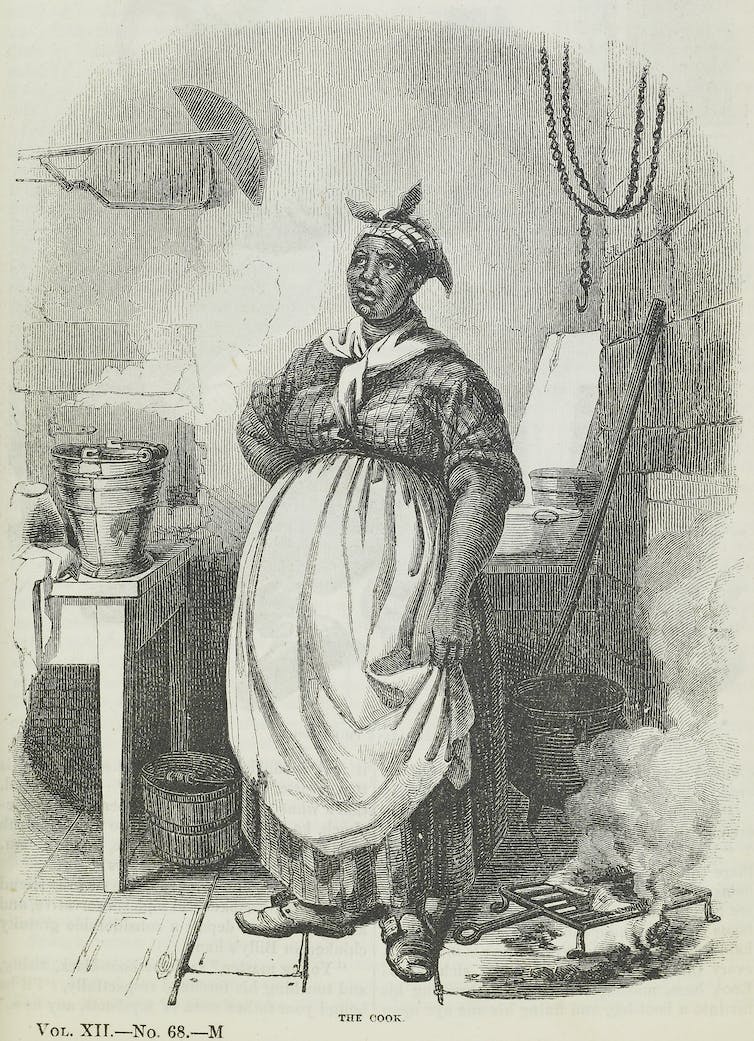 Southern plantations relied on the forced labor of enslaved African and African American cooks, who worked around the clock for the pleasure of the plantation elite. Plantation kitchens were not romantic spaces where the white mistress of the house would bake pies and sip tea while reading The Virginia Housewife.

By the late 17th century, southern plantations moved away from their reliance on white indentured servants, whose terms lasted up to seven years, and replaced them with enslaved Africans, who were held for life. By the early 18th century, the production of plantation fare was mostly in the hands of enslaved Africans and African Americans.

As revealed in diaries, journals, slave narratives and cultural landscape studies, these kitchens were landscapes of power, control, pain, sorrow, fear – and only rarely joy. These spaces hold the stories of the thousands of enslaved cooks who were bound to the fire, cooking what became southern cuisine.

The vast majority of Americans get their history not from books, but from media and tourism. The sharp decline in Americans’ historical knowledge has been building for years and has frightened many historians, perhaps for the reason that the 19th-century philosopher George Santayana gave, that “those who cannot remember the past are condemned to repeat it.” We are living in history’s legacy. History informs the present.

Historic sites have a significant responsibility to uphold integrity and honesty and adhere to a code of ethics. The National Council on Public History’s code of ethics includes these directives: “Public historians should carry out historical research and present historical evidence with integrity. Public historians should strive to be culturally inclusive in the practice of history and in the presentation of history…research-based decisions and actions may have long-term consequences.” 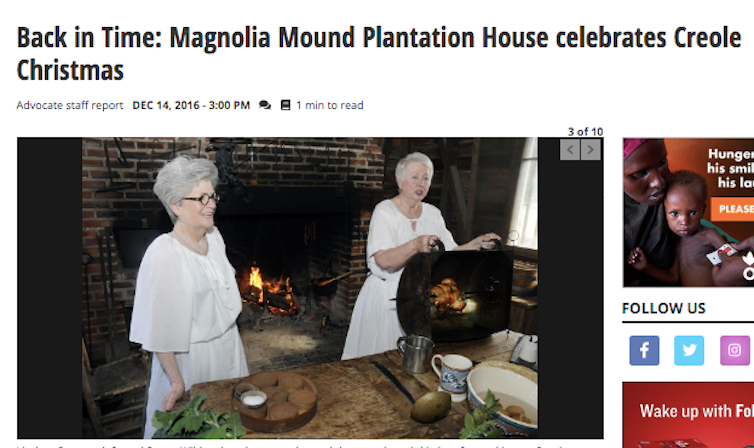 Thousands of enslaved cooks were worked to death. They spent their lives cooking for the big house and rarely receiving credit, while the white mistress of the house claimed their fame.

This legacy resonates in plantation museums, when foodways presentations are given in the kitchen or dining room. But elite white plantation mistresses did not cook in these early American kitchens, nor did they create the food that gave way to southern hospitality and American cuisine.

Recipes like gumbo, shrimp and grits, jambalaya, hoppin’ John, okra stew and fried fish were favorites among the slave-holding elite. These dishes, African in origin, became American cuisine because of the forced labor of enslaved Africans and African Americans. These were their recipes.

Museums are tasked to represent history in the most honest way possible, through lectures, programming, historical interpretation, reenactments and exhibits. But when it comes to slavery, this line is often blurred. Some museums are in the business of historical fantasy, and Nicole A. Moore, an African American interpreter and hearth cook, stated in a personal interview that it is time for museums to be responsible.

“That lack of recognition is all too common and whether sites want to acknowledge it or not… they won’t make you uncomfortable by sharing the truth, so please bring your fantasies and ideas about this time period, and they’ll keep the dream alive.”

This dream is that slavery wasn’t that bad, that the enslaved community was happy cooking for the big house, and was at most an assistant. This fantasy gives full culinary authorship to the white plantation mistresses.

Many visitors want confirmation of their limited historical perspectives, often gained from grade-school textbooks, most of which distort the reality of history. Most visit historical sites to connect with the past and to find a sense of pride in our collective history.

But the reality of the past can interrupt premeditated concepts of history. Some museums, for example, are making a conscious effort to properly represent these historic kitchens and those who cooked in them. Among them is Thomas Jefferson’s Monticello, which has led this cause for decades by using the stories of enslaved chef James Hemings and others, through interactive African American-led programming .

Williams was the first African American interpreter to cook in the plantation museum’s kitchen, marking a historic moment for the site and its public narrative.

Stratford Hall, the birthplace of Robert E. Lee and the site where I work, has also hired Williams for its Christmastide program in December, where he will cook an 18th-century meal in the historic 1738 kitchen and teach visitors about plantation kitchen labor, enslavement and the birth of American cuisine.

These sorts of programs attempt to correct the stories told at these sites, to better represent history and place.

Plantation museums are having an identity crisis. Some visitors are complaining about having to learn about slavery. Simultaneously, historic plantations are losing support from wedding venue sponsors who criticize the promotion of these sites as romantic and ahistorical.

The latest critiques highlight the divisions in public opinion about the functions of such sites. The questions remain, what role do these museums have in telling our nation’s history, and at what point does representation matter?