Cynthia A. Kierner teaches early American and women's history at George Mason University. She is the author or editor of nine books, including Inventing Disaster: The Culture of Calamity from the Jamestown Colony to the Johnstown Flood, which was published in November 2019 by the University of North Carolina Press. 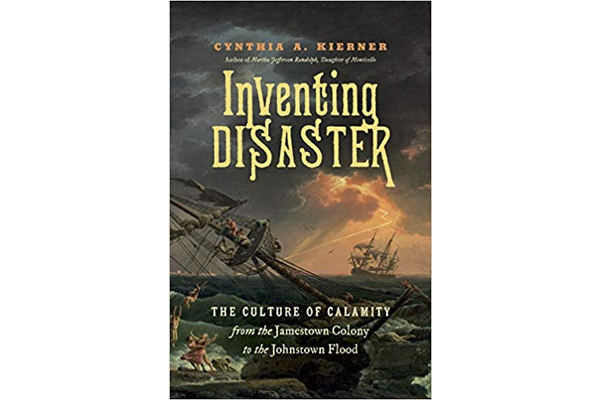 Each year, hurricanes pummel the Gulf Coast, tornados batter the Great Plains, and other disasters—many climate-related, others not—leave many Americans injured and homeless. Survivors expect the federal government to provide disaster relief, flood insurance, and other benefits to allay their misery. It may surprise those Americans who embrace "originalism" in most other contexts that federal disaster relief so patently violates the original intent of the Constitution as envisioned by the American founders.

Philadelphia's 1793 yellow fever epidemic was the first test of how the U.S. government would respond to a disaster that threatened the lives of thousands of citizens. At the time, the city was home to three governments—local, state, and federal—all of which fled, leaving citizen volunteers to tend to the sick and bury the dead. President George Washington's correspondence with his cabinet indicates that the nation’s leaders saw the war in Europe, not the fever in Philadelphia, as their most pressing business. When Congress reconvened, debates about adopting a national quarantine law centered on the proposal's constitutionality, not its potential to save lives.

“An Act for the relief of the sufferers by fire, in the town of Portsmouth,” passed by Congress in 1803, is sometimes characterized as the first federal disaster relief legislation. In fact, that law did nothing to help widows, orphans, and others left destitute and homeless by the fire; it merely established a moratorium on the collection of debts that merchants in this New Hampshire port owed to U.S. Customs. President Thomas Jefferson sent Portsmouth's local relief committee a generous donation of $100 for humanitarian purposes but asked that his gift be anonymous because it came from him as a private citizen, not as a representative of the U.S. government.

Indeed, with one notable exception, humanitarian relief was not forthcoming from the federal government during the lifetimes of the founders. That exception was in 1827, when Congress granted the city of Alexandria $20,000 after a fire there destroyed fifty-three buildings, leaving many homeless. Now in Virginia, Alexandria was then part of the District of Columbia, and thus governed by Congress. Even so, disaster relief for the town was controversial. In 1831, when considering a plea from the mayor of Georgetown—also part of the District—for firewood for the poor during a particularly brutal winter, Congressman James K. Polk of Tennessee condemned the proposal, arguing that the Alexandria fire had set a dangerous precedent. "Was the obligation [of Congress] to contribute to the relief of sufferers [there] . . . greater," he asked, "than to those of other parts of the Union?"

Like urban fires, hurricanes, earthquakes, and other so-called natural disasters were common in the early republic, but relief after such calamities was locally organized and privately funded. State governments rarely allocated funds for disaster relief. And though Congress allowed settlers and speculators whose landholdings were destroyed by the New Madrid earthquakes of 1811-12 (in present-day Missouri) to swap them for new acreage, that offer aimed not to help those who experienced physical suffering or even economic loss as a result of the quakes but to strengthen U.S. power in the West by encouraging white settlement.

In 1803,Congress's decision to protect Portsmouth's merchants and their commercial interests, rather than to alleviate human suffering, set an important precedent. Merchants benefited from similar legislation after Portsmouth's second big fire in 1806, as did commercial interests in Norfolk and New York when major fires occurred there in 1804 and 1835, respectively. Congress took these steps to assist merchants in the aftermath of urban fires because cities and their ports—as sites of trade and sources of tax dollars—were deemed essential to the republic's fiscal and economic health.

Congressional action (and inaction) was in keeping with the vision of the men who drafted and implemented the Constitution, who did not see disaster relief or assistance for suffering citizens as part of government's job, despite the fact that they endowed the government under the Constitution with capacious powers. Those powers chiefly pertained to military and fiscal matters, and their main purpose was to enable the government to fight wars, secure western territory, and protect U.S. trade and commerce.

Although Congress occasionally dabbled in disaster relief in the post-Civil War era, it was not until 1950 that it enacted comprehensive national disaster relief legislation. The Disaster Relief Act of 1950, a Cold War era measure inspired in part by the chilling possibility of nuclear annihilation, did not result in an immediate and dramatic expansion of federal involvement in disaster relief and prevention, but it was an important first step in that direction. Today's popular National Flood Insurance Program was created in 1968, as part of the more general expansion of federal largesse via the Great Society programs that conservatives love to hate. The Federal Disaster Assistance Administration—FEMA's precursor—was established in 1973.

The point of this crash-course in the history of American disaster relief is neither that we should return to the practices of the early republic nor that the political leaders of the founding era were callous or clueless, but rather that ways of dealing with disaster relief and prevention are products of their specific historical and cultural contexts. Just as the Cold War led Americans to think about—and plan for—ruinous human and material losses, federally funded disaster relief later grew exponentially as property-owning Americans sought what they perceived to be their cut of an expanding national social welfare project.

What does the appalling spectacle of the Superdome after Katrina, the disgraceful neglect of post-Maria Puerto Rico, or the far greater attention paid to wildfires in California over their equally devastating counterparts in Oklahoma, say about the politics and culture of twenty-first-century America? What should we make of the fact that billions spent on federal relief and rebuilding in disaster-prone areas has led some to argue that such expenditures must be offset by cuts social welfare programs—despite the fact that disaster-related spending disproportionately benefits affluent Americans?