A Museum For The People: Anacostia Community Museum

Laura Gonzalez is a intern for GW HNN.

Paul Howard Perry is the Director of Education and Outreach for the Smithsonian Anacostia Community Museum. A California native, Paul has been a museum education specialist for over 10 years.  His previous experience includes Education Director of the Louisiana State Museum in New Orleans and education consultant for the King Abdulaziz Center for World Culture, Saudi Arabia, as well as Director of Education and Public Programs at the Anchorage Museum of History and Art, Anchorage, Alaska. Paul is a member of the American Association of Museums, and the American Association of State and Local History Museums.  He has an MAT in museum education from George Washington University, and a BA in Anthropology from California State University, San Bernardino. 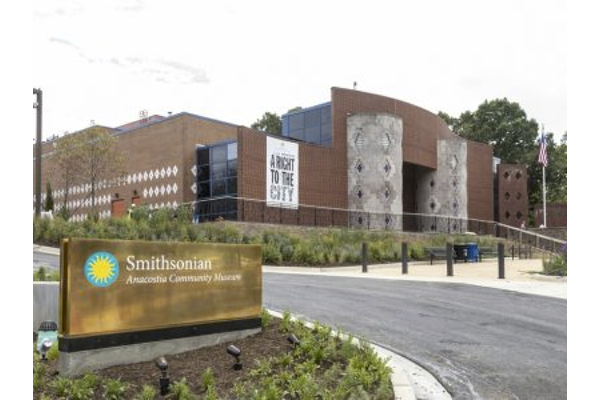 Originally named the Anacostia Neighborhood Museum by the Secretary of the Smithsonian Institution, S.Dillon Ripley, the Anacostia Community Museum opened in 1967 as the first federally funded community museum. During this time, the museum was an outreach effort by the Smithsonian to create a museum that represented the local African American community. John Kinard, a local community activist and minister, was appointed the director and employed his skills in community engagement, organizing, and outreach to shape the practice and direction of the museum. Beginning in the 1980s the exhibition program turned to broader national themes in African American history and culture with a focus on preserving that history. This effort was followed by a series of exhibitions to feature more African American artists, such as André Leon Talley and Camille Cosby.

The name of the museum was later revised to the Anacostia Museum and Center for African American History and Culture to be inclusive of these efforts, which is how the museum became a prototype for the new National Museum of African American History and Culture that opened in 2016. Once this new museum opened on the mall the Anacostia Community Museum reconnected with their early work that was once spearheaded by Mr. Ripley. By rebranding itself as both a museum and center for history and culture, the ACM began to serve broader audiences and foster unique exhibitions that focus on community issues and local history. In 2006, the museum’s name was changed to Anacostia Community Museum, to reflect a renewed commitment to examining issues of contemporary urban communities. Throughout its storied history of over 50 years, the museum has remained relevant, developing documentation projects, exhibitions, and programs which speak to the concerns, issues, and triumphs of communities and which tells the extraordinary stories of everyday people.

On December 6, 2019, the Anacostia Community Museum (ACM) and Asian Pacific American Center (APAC), held its symposium “A Museum for the People: Museums and Their Communities, 50 Years Later.” The symposium was organized to outline the future of community-based cultural organizations and how their organizations could meaningfully serve the needs of communities. Scholars, museum professionals, community members and other arts and culture workers convened to explore what it means to be a museum for the people in the 21st century and beyond. The moderators for the panel discussions were Melanie Adams, Director of the Smithsonian Anacostia Community Museum, and Lisa Sasaki, Director of the Smithsonian Asian Pacific American Center. During the symposium, they asked the panelists how museums could transform communities and vice versa. The goal of the symposium was to have an open and honest discussion about their successes in community based work, the challenges that they face, and potential strategies for working together to bring about lasting, positive change.

After the symposium, I interviewed Perry Paul, Director of Education and Outreach for ACM to talk about the educational programs that are being implemented to help the community. When discussing how ACM represents the people of Anacostia, Paul said they represent them through their mission. Together with local communities ACM illuminates and amplifies their collective power to preserving communities’ memories, struggles, and successes. Their vision for urban communities is to activate their collective power for a more equitable future. Paul said the exhibition they have now is called A Right To The City which examines gentrification in Washington D.C. He says they are trying to “educate the public about these issues through a two-way dialogue.” By using a historical perspective they want to “engage people with civic engagement and civic activism.” An important reason why the education programs have flourished is because of their collaborations.

The ACM is currently partnering with the DC Public Library for The Right to the City exhibit and Martha’s Table for the new upcoming exhibit focusing on food access that will show in Fall 2020. Paul says these collaborations are part of ACM’s concept of museum without walls. Their goal is to implement exhibitions and programming offsite into the communities they serve. Paul says it was “a conscious decision in the education program to take [the museum] off site into the DMV area...to do author talks, lectures, and panels.” This way they can make their  programming inclusive of all of its primary audiences. To help museum staff remember their primary audiences based on their new strategic plan, they like to use the acronym DMV which stands for: DC history lovers, the Metropolitan DC area, and visitors involved in civic engagement activities or organizations. This embodies two different communities: local constituency and a wider audience, which allows ACM to develop programs for everyone interested in African American history and culture.

When asked what makes the Anacostia Community Museum different from other Smithsonian museums on the National Mall, Paul explained that they take a “microscopic approach” to the way they address issues. He described how the Smithsonian exhibitions take a large view of things and because ACM is smaller they go into the weeds of an issue. They focus on the unsung voices. For example, the civil rights movement was a time of growth for the African American community and it was important to document those achievements. ACM decided to take a grassroots approach to talk about people that weren’t in the history books, but still made an important impact during that period. By breaking down issues at a local level, ACM has had a meaningful influence on the people of the Anacostia. Through education programming ACM has created meaningful dialogues between people and makes them want to do something for their community. This is how ACM continues ongoing efforts to represent, amplify, challenge, and innovate the community of Anacostia and the DMV area.