Amidst the Rubble: Hope Harrison on the 30th Anniversary of the Fall of the Berlin Wall

Paige Morse is an intern at the History News Network. 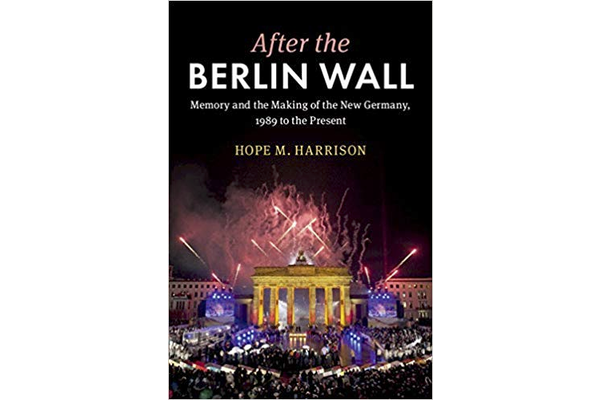 Hope Harrison is an Associate Professor of History and International Affairs at The George Washington University. She specializes in the Berlin Wall, East and West Germany and the International History of the Cold War, to name a few of her areas of expertise. Her latest book, After the Berlin Wall: Memory and the Making of the New Germany, 1989 to the Present, was published in November and delves into how the Berlin Wall is remembered since its fall up until the present day 30 years later.

What made you want to study the Berlin Wall and the way it is remembered?

The Berlin Wall was such a fundamental part of life in Germany and Cold War for the 28 years that the wall stood. It's also iconic. I mean people around the world know about the Berlin Wall and have read about it and seen pictures. It represented the Cold War. It represented the repression of communism, and then when it suddenly fell, it suddenly became a symbol of freedom and of the end of the Cold War. Since it was such an important part of German history, and since Germany is really an expert in dealing with difficult parts of their past, particularly the Holocaust, I wanted to look at how has Germany dealt with this other difficult part of its past, the 28 years that the wall stood.

What is your personal connection to the Berlin Wall at the time of its fall? What was it like to be present at such a historic moment in time?

I was on a plane headed to Berlin when it fell and so I arrived a few hours later. It was incredible. It was so exciting. It was amazing to be there and watch them, actually with bulldozers, remove pieces of the wall so that they could create new crossing points in the wall for East Germans to enter into West Berlin and so I saw West Berliners and West Germans standing there on the western side of the wall welcoming these East Germans and everyone was crying and cheering and hugging each other. It was just profoundly moving.

Did you use your own personal experience at the site of the Berlin Wall to frame your research for your most recent book?

Not exactly directly, but there is no question that being there and watching the aftermath of the fall of the wall in some sense, in some deep part of me, that probably started the process that would ultimately lead me to write this book. My first book was about the building of the wall. My first book, which was a prize-winning book, was called Driving the Soviets Up the Wall and that told the story of why the wall was built in 1961, so this is my second book now that I just published on the Berlin Wall. Of course, this one looks at the 30 years since its fall.

How did you go about collecting information for the book, After the Berlin Wall?

Many, many, many trips to Germany and to Berlin especially over many years. I interviewed over 100 Germans who had something to do with the way in which the Berlin Wall is remembered. These are not just regular private individuals with their own private memories. What I was interested in was the history that is visible in public places that millions of people come to, such as the National Berlin Wall memorial that gets like a million visitors every year. I was interested in who gets to decide what people learn when they come there and in other public spaces and also at big political events commemorating the rise and fall of the wall. How I went about that was by talking to people who have had some impact on basically the story that gets told about the Berlin Wall in public in Germany. That's one thing I did, was I interviewed people. Another thing I did was I attended those major ceremonies, so I was there in Berlin for the 15th, 20th and 25th anniversaries of the fall of the wall, all of which were big events that I write about. I was also there for the 50th anniversary of the building of the wall. Another way I went about this was by consulting archives, all sorts of document collections, as well as following debates in public, particularly in the media, debates about what should be remembered about the wall and how it should be remembered.

What were some of the most interesting things that stuck out to you from your research?

One of the people I write a lot about was basically the founder of the National Berlin Wall Memorial and he was a protestant minister, Manfred Fischer, and he said to me, "Look, the Berlin Wall when it fell..." he felt like, "We need to preserve this just like people preserve a crime scene." He said, "This was a crime scene. People were killed here. We must remember that. We need to preserve some parts of the wall as a memorial." One of the interesting things for someone from the outside is the Germans, initially the vast majority of them, didn't want to preserve anything. They just wanted to get rid of it. Now, that's understandable. It had been a terrible thing, so you get it on the one hand, of course they wanted to remove it. On the other hand, they now regret that they didn't save a bit more of it for people to really experience what it was like.

What is one thing you hope readers will walk away with after reading your book?

An understanding of the people that I call "memory activists," like Manfred Fischer, people who believe it's important to remember history in public places, even difficult history, which is a big issue in our own country. We're not so good at that. We are only really at the very beginning of grappling in depth with racism, with slavery, with lynching. Germany has really done a lot to confront first the Holocaust, which I also write about in my book, and also the past of the Berlin Wall. Understanding the commitment it takes to fight in an environment where people don't want to remember, to say, "We really need to remember and should remember."

Why is this event so important for the public to engage with?

Well, right now in this country, there's much talk about our own wall with Mexico. Now, the Berlin Wall was very different. The Berlin Wall was to keep East Germans in, whereas our wall is to keep people out of the US. As I write about this, [I find that] all walls generally involve violence. The people who served at the Berlin Wall, the border soldiers, some of whom killed people trying to escape across the Berlin Wall, many of them are traumatized to this day 30 years later for the role they played in upholding that lethal border. I think we can learn from that, that walls have very long, complicated legacies even after they are taken down, and that it is not something one should engage with lightly.

What other ways, besides writing books, do you engage the public in the historical legacy of the Berlin Wall?

I have given many, many public talks at book stores, at museums. I'm speaking tomorrow at the Library of Congress. I have spoken many places in the US. I have also spoken in London and in Berlin. I have been interviewed on television and on radio and by newspapers really from all over the world, from the US to Germany to England to Russia to Portugal, BBC Spanish. People all over the world are still fascinated by the Berlin Wall and the 30th anniversary of the fall of the wall still seems to get a lot of attention, so I have been doing everything I can to respond to lots of media requests really from all over the world.

How do your roles in various historical organizations, like History and Public Policy Program, the Cold War National History Project and the Berlin Wall Memorial Association, allow you to engage with the public?

They all involve either me speaking in public or planning for the engagement of the institution that I am a part of to engage with the public. The Berlin Wall Memorial Association in Berlin, where I am a member of the board, they do multiple events for the public throughout the year. When I was asked to join, I was the only non-German so I am able to sort of bring an outsider perspective to the German public. Also, the Allie Museum in Berlin tells the history of the US, British and French allies and the role they played after World War II for 40 years deployed in West Berlin and West Germany. That museum, hundreds of thousands of people visit that museum, so being part of the decisions about what are the exhibits we are going to have, what are the events that directly engage the public. Here in the US, with the History and Public Policy Program and the Cold War Project, both of which are at the Woodrow Wilson Center here in DC, all of their events are open to the public. Also, they have a fantastic online digital history archive where anybody from anywhere, the public at large, can read original documents from the Cold War.