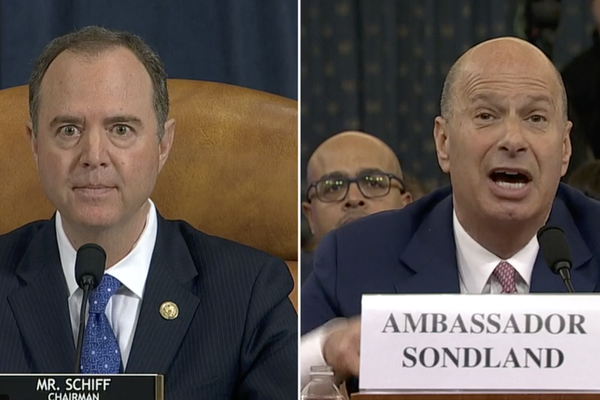 Once again, the United States is experiencing the profound drama of Presidential impeachment proceedings. But, dissimilar from the past, this time the implications for the rest of the world could be large.

The first was the slow-brewing crisis that began with a midnight break-in at the Democratic National Committee’s offices at the Watergate Hotel in Washington in 1972. This impeachment went on for two years and consumed the American political system. It finally ended in President Richard Nixon’s resignation in August 1974. The second was the special counsel investigation of President William J. Clinton, who was impeached in the U.S. House of Representatives but acquitted by the Senate in 1999.

In both cases, the roots of the crises were domestic. Nixon was accused of misusing his office for domestic political goals, and then of obstructing the investigation. Clinton was accused of perjury and other abuses relating to his personal behavior. The case against Trump is significantly different. U.S. foreign policy is at its very core.

American relations with Ukraine are not some peripheral issue. Its Ukraine policy is rooted in its commitments to European and international security. At least since Russia’s annexation of the Crimea and incursions into eastern Ukraine in 2014, helping Ukraine gain its independence and sovereignty has been a central foreign policy issue for both the US and the European Union.

Moreover, unlike the two previous impeachment crises, this one could clog up the machinery of US foreign policy. During Watergate, Henry Kissinger, serving as both National Security Advisor and Secretary of State, kept the ship afloat, and Sino-American relations, the Vietnam war, and US-Soviet interaction remained high priorities. Likewise, throughout the Clinton drama, which coincided with the beginnings of the Kosovo War, US foreign policy making did not have any major disruptions.

Obviously, the same cannot be said for the Trump impeachment investigation. The proceedings have shown deep divisions between a foreign policy establishment that is trying to maintain the stated American policy on Ukraine and a White House that has been pursuing fundamentally different goals.

Whether this apparatus is still capable of carrying forward its work on this critical problem is now an open question. On the White House side, there is a noticeable absence of ‘adults in the room’. Under Secretary of State, Mike Pompeo, who himself has been implicated in the scandal, an already diminished State Department has become a key battleground in the larger impeachment fight.

Moreover, Trump himself could make the current impeachment drama far worse for the rest of the world. During the Clinton proceedings, the White House was committed to maintaining business as usual and avoided participating in the daily disputes of the process. Trump has already adopted the exact opposite approach, not least by attacking (on Twitter) the former American ambassador to the Ukraine while she was testifying before the House Intelligence Committee.

Clearly, Trump intends to obsess over every detail of the process. Every minute that he spends tweeting and watching Fox News will be time that other occupants of the Oval Office would have spent focusing on pressing issues of state. In this respect, the Trump drama has parallels to Watergate, which was clearly a distraction for Nixon. But given that Trump is even less constrained (or even aware of) the constitutional principles he is accused of violating, his efforts to derail the proceedings are likely to become even more brazen.

Whether Trump’s behavior justifies removing him from office will be for the Senate to decide. But whatever happens, America’s political crisis comes at a time of rising global instability. In addition to a revisionist Russia seeking opportunities for zero-sum gains wherever they can be found, an increasingly assertive China is flexing its muscles in East Asia and on a global stage.

Meanwhile, the Middle East has entered another phase of profound instability, such that a single spark could easily ignite another crisis. Kim Jong Un’s nuclear armed regime probably is contemplating new provocations after recent missile tests and declaring it is no longer interested in future meetings with President Trump. Trade tensions with China remain high despite the recent announcement of a ‘phase one’ deal between America and China. And mass protests are sweeping the globe, from Santiago and Quito to Beirut and Hong Kong.

In today’s intertwined world, a crisis anywhere can end up on the President’s desk, and the policy response that does (or doesn’t) come can have global implications. French President Emmanuel Macron recently made headlines in America (PBS Nighty News Hour) and elsewhere by warning of an impending ‘brain death’ for NATO. If that grim prognosis about the state of transatlantic relations was true earlier this month, it is now even more relevant now that the impeachment process has reached a fever pitch.

In the previous impeachment episodes, the United States remained a strategic participant in global affairs. But America under Trump has already proved to be a source of global disruption. Whether the latest scandal leads to a strategic explosion or merely a strategic hiatus remains to be seen. However, the world can ill afford either scenario.