Gideon Remez is an associate fellow of the Truman Institute, Hebrew University of Jerusalem, specializing in Soviet/Russian military involvement in the Middle East. 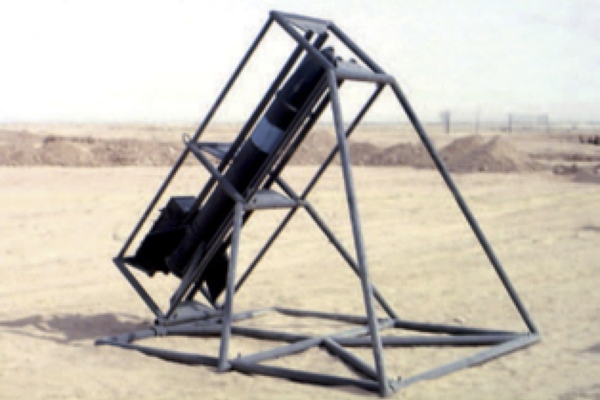 A shorter version of this article was posted in The Times of Israel.

It took a few days for the Israeli military to disclose that during last week's round of rocketing from Gaza by Islamic Jihad, a new weapon was introduced: a projectile packing a far larger explosive charge than those hitherto fired. Residents of a settlement in the Northern Negev related that it had caused a terrifying blast when it landedlate at night, andin the morning they discovered that it had completely demolished one of their greenhouses, leaving an enormous crater. This pit was incomparably wider and deeper than the relative pockmarks that were made in roads and fields by the Qassam and Grad rockets of previous salvos, destructive as those had been when they scored a direct hit on a residential or industrial building.Imagine, some residents said, what would have happened if this "mega-rocket" had struck one of their houses; none of the reinforced shelters that have been built in residences of the region could have withstood it. If this threat persists and becomes routine, the residents feared, they might have to move away. Expectations of such a response, as well as operational considerations, were presumably part of the military's motivation to delay disclosing the matter.

Photos that the Palestiniansposted of their new weapon looked eerily familiar to my co-researcher at the Hebrew University's Truman Institute, Isabella Ginor, and myself. The stubby rocket and its primitive-looking pipe-frame launcher, as well as its scary effect, closely resembledwhat we documented for our recent book The Soviet-Israeli War, 1967-1973. But then it was an Israeli development that figured centrally in the War of Attrition against Egypt along the Suez Canal – and presented a challenge to the Egyptians' Soviet advisers. Their accounts provided extensive detail about the Israeli rocket, which had remained top secret on the Israeli side for years afterward and whose role in the course of the war was therefore largely overlooked.

For the Palestinians now, as for the Israelis then, the purpose of wielding this blunderbuss was to counter the adversary's overwhelming advantage in firepower. The rapid Soviet resupply of Egypt's army after its devastating defeat in the Six-Day War soon had the small Israeli garrison east of the canal hopelessly outnumbered – by an estimated 13 to one -- in artillery pieces as well as manpower to fire them. Israeli engineers got to work on a makeshift counterbalance, based on the heaviest variant of Soviet Katyushathat had been captured in the June war.

A year later, a Soviet artillery adviser to the Egyptian II Army Corps on the canal, G. V. Karpov, was summoned to inspect the fragments of Israeli rocket of a heavy and hitherto unfamiliar model, which had “left a big crater” when it was first used. As the canal front was still relatively quiet, this appears to have been a test firing. But Karpov got a better look when, on 8 September 1968, the Egyptians – encouraged by the Soviet advisers – unleashed the first massive shelling on what were the still-flimsy Israeli positions on the east bank of the canal. The Israeli response included, among others, a number of Ze'evs.

The Israeli “flying bomb” was inaccurate, and Israeli operators would soon learn that it was prone to boomerang. Still, at virtually point-blank range it could cause a good deal of damage to positions that were hardened only against smaller shells. The intended, and successful, effect of its blast was what would be called, a half-century later, “shock and awe.” Although UN observers reported at least three such rockets fired on 8 September, Egypt – like Israel today – was in no hurry to publicize this, evidently for fear of sowing panic among residents of the towns along the canal's west bank.

Israeli soldiers, from whose outposts the Ze’ev was launched by specialists, were not permitted to handle the top-secret weapon themselves. I and my fellow paratroop reservists were likewise warned when two big crates were installed in our strongpoint overlooking the Jordan, pointed at Jordanian or Palestinian targets across the river. They were described to us only, mysteriously, as "Ze'evim." We never got to witness a launch, but our counterparts on the canal front judged by the rocket's visible impact that that it must deliver a half ton of high explosive.

Drawing on his expertise, Karpov calculated correctly that the rocket's warheadwas actually less than one-fifth as big, and this too at the expense of very short range – 4km – which would put the launch sites within easy reach of Egypt's new, Soviet-supplied 130mm cannon. He began working out countermeasures, which were partly implemented on 26 October when the next artillery barrage was initiated.

The Egyptians claimed (but UN observers denied) that this round was provoked by Israel's firing of two 216mm rockets which destroyed houses in Port Tawfik, at the southern end of the canal.Out of the 14 rockets the Egyptians accused Israel of launching at civilian targets, they exhibited (and presumably turned over to Karpov for further study) one unexploded specimen, which they claimed was shot down by their anti-aircraft guns. If this was true, and the rocket wasn't simply a dud, it was quite a feat given the missile’s short trajectory. Israel's infinitely more sophisticated anti-missile array did not accomplish the same against the Palestinian "mega-rocket" last week.

Cairo also claimed that its big guns – clearly following Karpov's instructions -- destroyed 10 “newly constructed” Israeli rocket-launch sites. The IDF, as before, denied using any missiles at all. Soviet advisers' memoirs confirmed years later that Egyptian firepower was “concentrated on the Israelis’ 216mm [rockets].” Unofficial Israeli accounts later admitted surprising hits on rear-line position that had been considered out of range (and rumors even spread about female soldiers fleeing naked from a shower shed).  In Egypt the entire engagement was henceforth referred to as “the missile incident” and would later be described as one of the Egyptians' major achievements.

Israel, which had sustained relatively heavy losses in those first two bombardments, took advantage of the lull that followed to construct the cannon-proof bunkers of the Bar-Lev Line. Egypt was slower to do the same, and even Karpov's guidelines did not put the Ze'ev entirely out of action. On 9 March 1969, the day after Egypt began the consecutive shelling and commando raids that would become the War of Attrition, a Ze'ev killed Egyptian Chief of Staff Abdel Moneim Riad and some of his officers while they inspected a frontline position.

Was the Ze'ev a game-changer? Besides the Soviet-devised riposte, the Egyptians did ultimately improve their fortifications. The appearance of Israel's heavy rocket hastened the USSR's agreement to provide Egypt with the longer-range Luna (Frog) tactical missile and other weapons it had hitherto withheld. The balance in the War of Attrition was tipped in Israel's favor that summer only by the introduction of its fighter jets as "flying artillery." Then the balance was reversed when the Soviets sent in their own SAM batteries, in their largest direct intervention overseas since the start of the Cold War. Although the Israel Air Force won a famous dogfight against Soviet-piloted MiGs in July 1970, its unsustainable losses to the Soviet missiles forced it to accept an unfavorable ceasefire which created the preconditions for Egypt's cross-canal offensive on Yom Kippur, 1973.

Israel's improvised heavy rocket did provide at least a temporary stopgap in military terms. But perhaps most relevant for today's confrontation with Gaza-based Palestinian organizations and the exposure of Israeli civilians to a similar weapon, it is worth recalling the role of the Ze'ev's big bang in terrifying the civilian populace of Egypt's civilian communities west of the canal – which emptied out soon after. I'll leave it to Israel's military experts to draw the lessons of this precedent for the present case of asymmetrical warfare – now that the "mega-rocket" shoe is on the other foot.