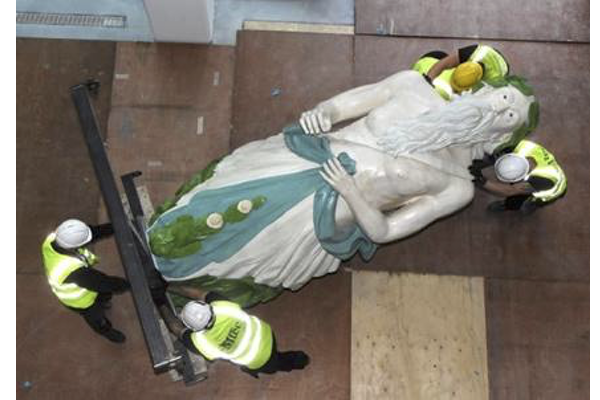 In what is the most ambitious sculpture conservation project currently taking place in the UK, 14 monumental 19th century naval figureheads have been saved from decay for the nation.

From spring 2020, these icons of Britain’s maritime history will be on public display at The Box in Plymouth. The Box is the largest museum & art gallery space opening in the UK next year and will be the biggest arts & heritage centre in the South West of England when it opens.

Three specialist conservation teams in London, Devon and Cornwall, led by Orbis Conservation, have spent over two years painstakingly restoring the 14 wooden figureheads to their former glory, after years of water damage led to rot and decay.  On loan from the National Museums of the Royal Navy, the carved figureheads, built to adorn the bows of 19th century naval warships, will start making their way back to Plymouth on Monday 21st October.

Weighing over 20 tonnes collectively, the largest of the 14 wooden figureheads to be rescued is HMS Royal William or “King Billy” a 13ft tall, 2 tonne standing figure of William IV carved in 1833. One of the most badly damaged of the figureheads was HMS Topaz a three-quarter-length female bust carved in 1858, whose ship was responsible for removing two of the Easter Island statues that are now in the British Museum’s collection. Topaz had wood rot throughout 90% of her structure but conservators used extraordinary techniques including Sonic Tomography to save her carved outer shell, before carefully replacing the rotting wood and repainting her.

Other figureheads in the collection also have extraordinary histories including HMS Sybille, inspired by the ancient Greek oracle, who played an active role in the capture of Canton during the Second China War, HMS Centaur who fought pirates on the coast of West Africa and served during the Crimea War in 1855 and HMS Calliope who was stationed in Australia during the early 1850s and deployed to New Zealand in 1848 during wars with the Maori including the attack on Ruapekapeka.

Led by Plymouth City Council, the figurehead conservation project is the most significant of its kind in a generation. It not only secures the future of the Devonport figureheads, but identifies The Box as a centre of excellence and innovation for the preservation and display of maritime heritage, with one of the largest collections of figureheads in the UK.  The ambitious aerial display concept has compelled teams of conservators and structural engineers to develop innovative solutions to overcome the challenges of decay on a grand scale. The Box is a pioneer for conservation of Plymouth city’s heritage and a new ‘safe home’ for Plymouth’s important national collections and archives. 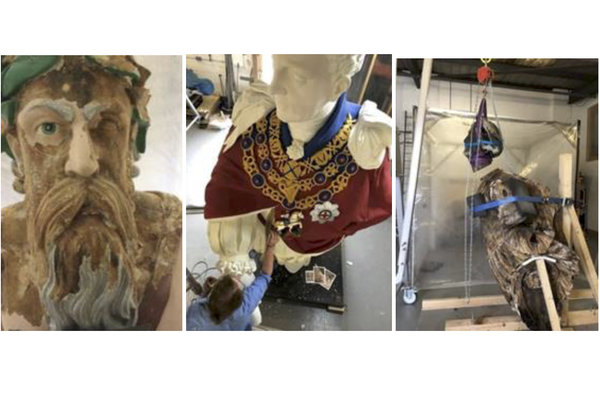 How are the figureheads being restored?

Due to the scale of the figureheads (the largest being 4 meters high, 1 meter wide and weighing 2 tonnes), conservators have pioneered a new technique using Sonic Tomography scanning - a method designed for measuring decay cavities within living trees that had never been used for conserving wooden sculptures before. This new method enabled conservators to assess the internal condition of the timber of each figure head. When scanning both HMS Topaz, and HMS Tamar, their condition was found to be severely degraded, yielding very little structural integrity to each figurehead, which enabled conservators to act quickly to restore them.

In most cases the Sonic Tomography showed such severe internal degradation through rot damage that the figureheads had to be carefully and systematically deconstructed, revealing internal timber so severely damaged that it resembled saturated compost, only retaining its structural integrity at the very outer carved surface. Each independent section then had to undergo controlled drying, in order to minimize warping and shrinkage of the timber, in large purpose-built humidity chambers.

Each figurehead has required full conservation, consolidation and restoration alongside a redesign of the existing mounting systems to facilitate suspension of the objects by steel cables. The colourful exteriors were not original and the paintwork hid internal decay, including a multitude of repairs with glass reinforced plastic and layers of paintwork which damaged the structural integrity of each sculpture.

Once the structural integrity of each sculpture was restored, one of the challenges of restoring the figureheads was how to faithfully replicate the original colour scheme of each individual sculpture. The conservation team they did cross section paint analysis to determine the original colours of each figurehead as they had been painted over many times. They were also able to track down a set of 1912 full colour cigarette cards featuring the navy’s most famous figureheads from the previous century, which included HMS Calcutta one of the figureheads being restored for The Box. Conservators made up a palette of colours inspired by the cigarette cards that was then used to restore each of the 14 figureheads when they came to be repainted.

Now in the final stages of restoration, on the 18th October the figureheads will begin their journey back to Plymouth where almost all of the figureheads were originally built to adorn naval warships in the 19th Century. On arrival in Plymouth, the figureheads will be suspended within the main atrium of The Box in a huge sweep that appears to sail across the glazed façade of the brand new museum and contemporary art gallery complex.  The ambitious aerial display concept has compelled teams of conservators to create complex but elegant structural mounts, with each figurehead secured in place with only 3 cables to create the effect of a fleet of carvings floating in space.

Tudor Evans, Leader of Plymouth City Council said: “The figureheads are more than just wooden sculptures; they’re iconic symbols of the history of the city of Plymouth and the Royal Navy. They’re also fantastic representations of the craftsmanship and skill of the sculptors who made them over 200 years ago. Right from the start when we were developing our original concepts for The Box we wanted to have a ‘flotilla’ of figureheads suspended from the ceiling of the new entrance in a nod to Plymouth’s important maritime history and as the place where great journeys start from.”

Hans Thompson and Maxwell Malden Co-founders and directors of Orbis Conservation said: “In terms of scale and complexity, this project has been one of the most challenging that the team at Orbis Conservation have ever encountered. Our analysis of both the surface paint layers and the structural integrity of the figureheads allowed us to develop a treatment methodology that saved the original carved surface and the figurehead itself.  Throughout this project we have uncovered the previously obscured craftsmanship and virtuoso carving of these formidable figures, which otherwise might have been lost to future generations. The fact that we have been able to save so much of the original 19th Century carving to be appreciated anew by visitors to the Box, has made this project especially rewarding.”

Figureheads have been mounted on the bows of ships from the earliest times, giving guidance and comfort to superstitious mariners and taking on something of the ‘soul’ of the ship. When on the bows of warships they provided an image of the fighting spirit of the crew and their nation, whether their role was warfare, exploration or the protection of trade.

Although ship design eventually made them redundant, the evolution of British warship figureheads pre-dates an established navy. For three and half centuries ships were given names that were appropriate to their function and the ships’ carvers created works of art that illustrated these names.

There are about 200 figureheads of the Royal Navy that have survived from their sea-service. They are mostly now in museum collections and naval establishments in the United Kingdom with a further handful overseas. Many of them have been repaired and restored over the years.

The City of Plymouth is undergoing transformational change with the £40million construction of The Box, a new museum complex that completely transforms, extends and combines the original City Museum and Library buildings and St. Luke’s Church, to create new galleries, a striking elevated archive with learning facilities and the first public square to be built in Plymouth since 2004, to form the largest museum and art gallery space in the South West of England.

The Box will open in spring 2020 and will be renowned for an engaging and highly immersive exhibition programme, which will showcase international visual arts, media and Plymouth’s rich heritage through ambitious loan exhibitions and its museum archives, as part of the city’s Mayflower 400 commemorations.

The Box will boast a unique exhibition programme that integrates contemporary and historic arts and heritage in order to bring the past to life through the present.  At the heart of The Box’s ethos is the conservation, heritage and preservation of Plymouth’s rich history and heritage. Once completed The Box will bring together six outstanding national collections into a new and sustainable home, including objects from Plymouth City Museum and Art Gallery, archives from the Plymouth and West Devon Record Office and film and photographs from the South West Television and Film Archive and South West Image Bank. This blend of richness of collections will enable the stories of international and local significance to be told through immersive experiences and amazing objects.

Led by Plymouth City Council, The Box is a partnership with the University of Plymouth, the South West Film and Television Archive (SWFTA), the South West Image Bank (SWIB) and the National Museum of the Royal Navy. The building is in the final stages of construction and fit out of the galleries and spaces is due to begin, which will entail a six-month re-load of over 2 million artefacts across all of the collections that starts in September 2019.

Orbis Conservation offers a comprehensive service in the conservation and restoration of all three dimensional art works and architecture. Founded in 2013 by Hans Thompson and Maxwell Malden, Orbis are a small team driven by a thorough commitment to the preservation of cultural heritage and to maintaining the skills of previous craftsmen and artists.

Orbis Conservation Ltd. specialises in a wide range of disciplines including stone and wood carving, decorative surfaces, condition surveys, conservation science and contemporary art. Combined with a thorough understanding and respect for Art History, we are fully equipped to treat decorative objects from past to present. Orbis also offer professional art handling and installation services.

The head of HMS Defiance arrives 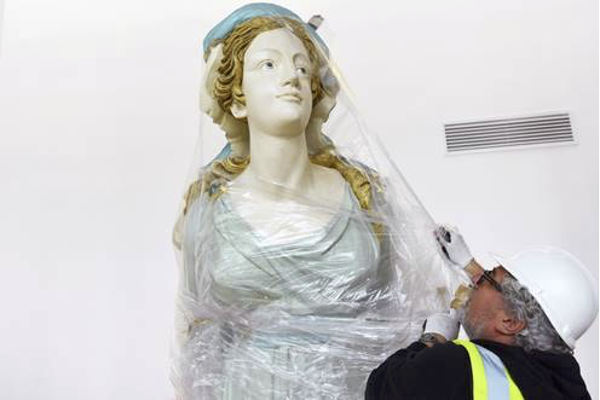