A Baseball Musical that Needs Some Relief Pitching 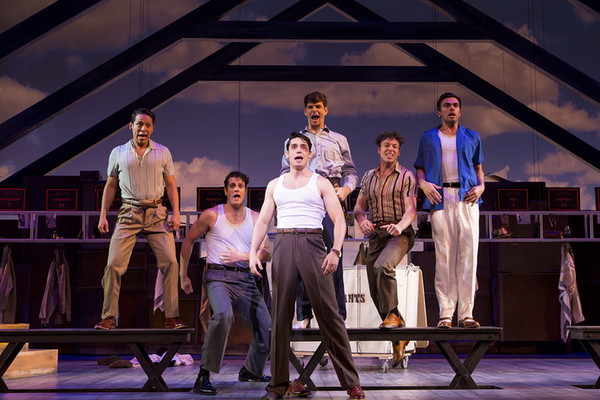 Last weekend, the Washington Nationals won their first World Series since 1924 in Texas and in New Jersey Last Days of Summer, a baseball musical set in the early 1940s, opened. Hooray for the Nationals and their sparkling pitching and prodigious hitting. And hooray for Last Days of Summer, even though the new musical has a lot of errors and needs some good relief pitching.

Last Days of Summer, written by Steve Kluger and based on his 1998 novel, is the story about players from the New York Giants 1940 team, that toiled in New York along with the Yankees and Dodgers, and a little kid who loved the game. The play opened last weekend at the George Street Playhouse, in New Brunswick, N.J.

The kid, Joey Margolis, meets Charlie Banks, a star on the Giants team, at the time that the kid’s dad has left his family and raced off with another woman. Joey, desperate for parental love, makes Charlie his new “dad” and starts to spend a lot of time with him.

It is suddenly time for Joey’s Bar Mitzvah and he gets Banks to help him prepare for the event. They need time to do that, time that ballplaying Charlie does not have. So, he takes the kid with him on the team’s road trip so they can study.

That’s basically the plot of Last Days of Summer. The first act is as wobbly as a knuckleball. In the second act, in which there is far less baseball than in the first, the story is much better developed. All is thrown into chaos when World War II begins and Charlie and other players, such as his friend Stuke, join the military. The story and plot both improve as the fantasy of baseball drifts away and the soldier boys get into trouble as do the folks back home.

Last Days of Summer ably directed by Jeff Calhoun, is a nice war story about life in New York in the 1940s, a dreamy world of baseball and the beach, that is disrupted by the war. It is a warm, cozy baseball star and little kid tale (oh, there have been so many of them). It works as a story about history. It has fine acting by a gifted ensemble, handsome sets and sharp choreography.

The play needs help, though, a bit of relief pitching in the ninth inning to hold it together.

First, the music, written by playwright Kluger and Jason Howland, all sounds the same. There are no songs that you hum going out of the theater and, while the tunes help tell the story, they leave you unimpressed. Not a day at the old ballpark at all.

The story itself is a bit forced at first. Name the number of ballplayers who helped a kid prepare for a Bar Mitzvah. Even though it gets much better in the second act, it still needs a sharpness and better character development. It is also very predictable. As a scene begins, you know how it is going to end. The end is very schmaltzy. The presence of a 30 something year old Joey in the play to narrate the story about himself as a ten-year-old kid is very awkward because you keep getting him mixed up with the ten-year-old kid.

If this play is about the Giants baseball team in 1940, there should be more baseball history. While the kid loved his Giants, they were a terrible team that year. The Giants were 72-80 and finished a lowly sixth place in the National League. They did have some bright spots, such as pitcher Carl Hubbell and slugger Mel Ott. None of this is mentioned in the play and it should have been. What is the history of New York without the history of baseball?

The play is staged at the brand new, sparkling New Brunswick Performing Arts Center, the new home to the theater group and other artistic ensembles. The Johnson Theater, where Last Days…is staged, is gorgeous. The complex has a second, smaller stage, the Laurents theater, for other plays.

Director Calhoun gets fine work from Julian Emile Lerner as the energetic and adorable Joey (kid), Danny Binstock as Joey (father), Christine Pedi as the aunt, Parker Weathersbee as Craig Nakamura, Don Stephenson as the Rabbi, Will Burton as ballplayer and buddy Stuke and Bobby Conte Thornton as Charlie Banks.

Let’s hope the play improves over time. Hey, the Washington Nationals did.