From Flappers to Generation Z: The Cycles of Generational Hostility

Chelsea Connolly is an intern with the History News Network. 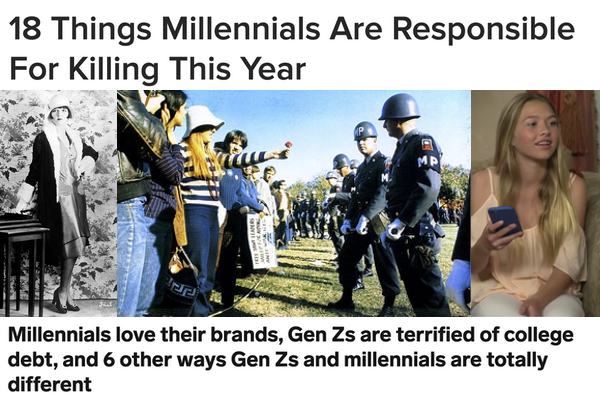 On Fox News this past August, Sean Hannity bemoaned the apparent decline in patriotism among millennials: “That’s what young people think?”, as if all young people share a singular ideology. This clip demonstrates the all-too-familiar conflict between the Baby Boomer generation (Hannity was born in 1961) and millennials. This animosity, though very pervasive in today’s media, is merely the current iteration of a pattern of thought and behavior that occured throughout the 20th century.

Generational conflict, also known as generational gaps, arises when two different demographics collide because one (the younger) has established a value system that is fundamentally different than the other (the older). This phenomenon typically coincides with the emergence of an adolescent group whose ideologies and behaviors shock their parents.

This friction first reared its head during the 1920s with the rise of the flappers. A Wall Street Journal article from 2007 notes that the mass-production of cars revolutionized the adolescent experience by giving teens and young adults the independence and the agency to behave as they wished. This behavior often included drinking (during Prohibition), and what was then considered radical sexual activity. Parents were beginning to feel a loss of control over their seemingly wild children. In 1922, a mother was quoted in the New York Times saying “Middle-aged people, who remember the old-fashioned girl, must interfere in the young people’s affairs and help to restore them to wholesome standards”. This idea of “the old-fashioned girl” exemplifies the mindset of adults who criticize their successors. Young people's actions are considered a rejection of traditional values, and a deterioration of the American moral compass which their generation had helped to build, and now their generation must work to rebuild. Even Charlotte Perkins Gilman, a famed first-wave feminist, criticized the flapper generation. In 1995, educational historian Margaret Smith Crocco noted that “Gilman came to disparage the vices of the new feminists of the twenties who mimicked men's behavior”. Born in 1860, Gilman was in her sixties during the Roaring 20’s and was thus firmly a part of the older, more cynical generation.

The next notable generation who bore a great deal of disapproval from their predecessors was the youth of the 50’s and 60’s. These two decades saw the proliferation of the beatniks and the hippies. In an interview with Margaret Mead, poet and beatnik legend Allen Ginsberg defined the word beatnik as “a word of insult usually applied to people interested in the arts”. Ginsberg said that this insult was propagated by the media to portray his generation as “a vulgarity”, and he refused to subscribe to that definition. Margaret Mead mentioned that “we do love to name generations, and we’ve been naming them for quite a long time now”.

This bitterness toward beats would soon encompass the hippies of the late 60’s and early 70’s. In a clip from the History Channel segment Ask Steve, resident historian Steve Gillon explains that the Greatest Generation “had an ethic of self-denial”, while their children, the Boomers, “had a sense of self-fulfilment”. These two approaches to life were incompatible, and thus sparked strife between the two groups. For example, in 1967 a CBS News special aired called “The Hippie Temptation”. Journalist Harry Reasoner said that hippies “tend to approach work as the rest of us do sport”. Throughout this story Reasoner maintains a very condescending tone: he describes hippie ideology as “style without content”, he says that hippies “make you uncomfortable”, and he calls their actions “grotesqueries”. Reasoner was born in 1923, which places him on the cusp of the Greatest Generation and the Silent Generation. His sentiments echo those of his peers, who saw hippies as lazy delinquents, a claim which in 2019 is extremely ironic given that Boomers cite the same evidence to describe millennials.

Older generations have always, and will most likely continue to disapprove of the actions of their children. However, these criticisms are often based on sweeping generalizations about an entire generation. In the aforementioned Ask Steve clip, Steve Gillon also makes the crucial point that Boomers were a more nuanced group than conventional wisdom would have us believe. In an article from The New Yorker, historian and critic Louis Menand urges us to detach the Baby Boomers form the social upheaval of the 1960’s, as they were too young to be the ones instigating that cultural revolution. He points out that most prominent figures associated with Civil Rights, Students for a Democratic Society, the antiwar movement, the women’s liberation movement, and even notable writers, artists and musicians were all born before 1946 (including Allen Ginsberg, who was born in 1940). Echoing Gillon, Menand writes “the fraction of any generation that engages in radical or countercultural behavior is always very small”.

When generations are discussed in such broad terms, whether it is to hurl criticisms or to attribute accomplishments, the variety and complexity of individual experiences is erased. This is especially true as our population becomes increasingly racially and economically diverse. The year in which one was born does not determine their identity. This is true whether someone was born in 1910 or 1990. Despite that fact, every generation from the Greatest Generation to millennials has been criticized, watered-down, and blamed for perceived societal problems. We can already see the roots of this cycle take hold among the discourse around the newest generation – Gen-Z. A search of the words “Generation Z” on the New York Times' website yields over 10,000 results.

Karl Mannheim, a foundational thinker of generational theory, defined generations as ‘cohorts’ of people who coalesce around a shared experience in their childhood. When I try and apply that methodology to my own life, I find myself at a crossroads. I was born in 1999. I don’t remember 9/11. Or dial-up internet. Or a time before the internet at all. But I do remember a time before iPhones. And Obama’s first inauguration. And the 2008 Recession. Am I a millennial? Or am I Gen-Z? The label I choose to adopt will determine which case of intergenerational conflict I am associated with, but it will not change my experiences. If this pattern of each generation criticizing the next persists, the best way to deal with its inherent flaws is self-awareness. Allen Ginsberg was self-aware when he realized that newspapers and magazines were exploiting the beats to sell more copies. Millennials and Gen-Z should embrace that same spirit and ignore whatever narrative is placed upon them because they know how stratified and idiosyncratic their lives truly are.