The Nazi Census and a Quiet Hero

Dwight Harshbarger is a West Virginia native, former psychologist, management consultant, corporate executive, and professor at West Virginia University. He is also the author of several historical fiction novels. In Witness at Hawks Nest, Dwight told the true story of Union Carbides unsafe practices in the 1930 construction of Hawks Nest tunnel that caused the acute silicosis deaths of hundreds of workers Americas deadliest industrial disaster. "Witness at Hawks Nest" received the West Virginia Library Associations Book of the Year award. "Valley at Risk: Shelter in Place" tells the true story of Bayer Crop Sciences fatal explosion that threatened Charleston, West Virginia, with the same toxic chemicals that killed thousands at Bhopal. "In The Heart of the Hills", Dwight captures choices and heartbreak during WWII in a small Appalachian community. A Quiet Hero is his fourth novel. 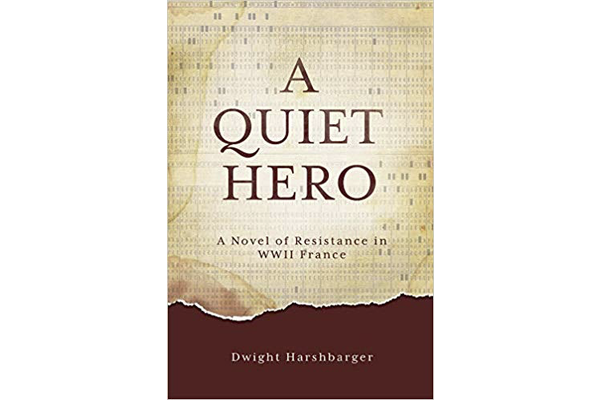 In 1940, Germany invaded and captured France. Step-by-step, the  Nazi occupiers began implementing a new state. There, as in other countries, the Nazis established a census to identify and locate Jews. Once identified, the Nazi occupiers planned to arrest French Jewsand send them to their deaths in concentration camps. The Nazis were stymied in France by insufficient numbers of trained people to key punch and process a huge number of computer punch cards.

René Carmille, director of the National Statistical Service (SNS), stepped in and negotiated for SNS to control and process Nazi census data on Jews. Carmille, a member of the French Intelligence Service and the Marco Polo cell of the French Resistance, then sabotaged the Nazi census. Lists of names and addresses of Jews could not be printed for round ups.  Carmille saved the lives of thousands of Jews. His story is told in A Quiet Hero.

In the occupied countries of Europe, the Nazi census was a critically important step in identifying Jews as unwanted residents. Once the census was successfully processed, the Nazis printed files of names and addresses of Jews. What remained was to send the Gestapo to those street addresses, round up Jews and ship them to concentration camps. There most of them would be murdered. This was done with great efficiency following the census of Jews in Holland: seventy-three percent of Holland’s Jews were murdered.

France proved to be more troublesome. The Nazi census in France asked if the respondent was a Jew. The question itself failed to respect France’s long history of rigorous separation of church and state. Further complicating matters, France, unlike Holland, was home to a diverse mix of ethnic groups and religious beliefs.

Responses to the census’ religion question were then processed. However, the Nazis failed to plan and implement an adequate system for transferring paper-and-pencil census data to computer key punch cards. As a result, Nazi data processing capacities in France were overwhelmed.

The US constitution mandates a count of “the whole Number of free Persons” every ten years. Each census is the basis for the apportionment of membership in the US House of Representatives and allocation of billions of federal dollars to states.

A citizenship question was asked for the first time in 1890, when foreign-born persons in the US reached 14.8% of the population. By 1950 the number of foreign-born Americans fell below 5% and the question was dropped.

In 1942, up to 120,000 Japanese American citizens were defined as threats to the country and relocated to internment—concentration—camps. President Franklin Roosevelt established the camps under an Executive Order, one of the 20th century’s worst violations of American civil rights.Japanese American citizens were singled out after the US Census Bureau, in violation of existing laws, handed over their names and addresses to the Secret Service.

As a presidential candidate, Donald Trump estimated the number of illegal immigrants in the USA at 30 to 34 million, about ten percent of the population, vs. government estimates of 11-12 million, about five percent. Candidate Trump proposed rolling back constitutional birthright citizenship for US-born children of undocumented immigrants and possible mass deportation of all undocumented immigrants. Following his election, he continued to call for increased border security, including construction of a Mexican border wall. He has repeatedly proposed a temporary ban on immigrants from Middle Eastern, principally Muslim, countries entering the United States.

Later, President Trump, after repeated references to the dangers presented by the so-called invasion of the United States by Muslim immigrants, both documented and undocumented, directed administration officials to include a citizenship question in the 2020 US Census: Is this person a citizen of the United States?

Even though US law prevents the Census Bureau from disclosure of individual citizen’s census information, answers to the question could be used to identify illegal immigrants and then take steps to deport them. Documented immigrants feared unwarranted harassment, even persecution. Undocumented immigrants feared that if their names and addresses became public, deportation would be made easier. Better to remain invisible.

President Trump issued executive orders increasing the number of immigrants considered a priority for deportation. A June 24, 2018, New York Times article quoted President Trump’s tweet, “We cannot allow all of these people to invade our country. When somebody comes in, we must immediately, with no Judge or Court Cases, bring them back from where they came.” The addition of the proposed 2020 citizenship question, “Are you a citizen?” was a means to that end.

After proposing the new census question, Secretary of Commerce Wilbur Ross stated the question would be important for more effective enforcement of the Voting Rights Act. He testified before Congress that the Justice Department had initiated the request.

Answers to the question would have identified persons President Trump labeled “invaders,” principally Muslims. Action could then be taken without judges or court cases. Harvard constitutional law professor Lawrence Tribe challenged Trump’s sweeping dismissal of due process. “The due process requirements of the 5th and 14th Amendments apply to all persons including those in the US unlawfully.”

The American Civil Liberties Union and other public interest organizations challenged the addition of the citizenship question to the 2020 census, citing research that found the question would double the number of non-citizens who opt out, not complete the census, from 5.1 to 11.9 percent. The challenges asserted that this would result in fewer representatives from congressional districts with concentrations of undocumented immigrants, principally African American, Latino, and Muslim minorities, primarily Democratic districts. For Republicans, a positive outcome.

In 2019, the United States Supreme Court ruled that the Trump Administration failed to demonstrate constitutionally sound logic for inclusion of the citizenship question in the 2020 census. The court concluded that the question would serve mainly partisan, anti-minority political goals.

In 1930s and ‘40s Germany, a demagogue amassed political power and step by step implemented the new Nazi state, beginning with the use of the Nazi census to identify and remove minorities, principally Jews.

In 1942 in Nazi-occupied France, in the absence of institutional safeguards to liberty, Gen. René Carmille, a member of the French Resistance, gained control of the Nazi census data. He then sabotaged it. Names and addresses could not be produced for round ups. Twenty-five percent of French Jews were murdered (vs. seventy-five percent in Holland). Carmille, a quiet hero, saved the lives of thousands of Jews—at the cost of his own life.

In a United States of the future, might a demagogue adopt Nazi policies toward minorities and, citing the precedent set by President Roosevelt, direct a step by step reform of American treatment of minorities? Most likely it would begin with a census to identify minorities and then follow with violations of their constitutional rights? In such a future, will we have quiet heroes to defend our constitutional freedoms?

An unsettling truth grows out of the study of the past—history repeats itself.