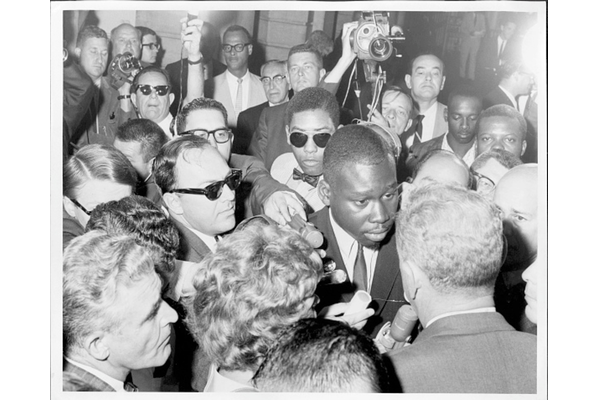 Attorney General Barr recently gave a speech to the country's largest law-enforcement organization in which he criticized "social justice reformers" and contended there must be "zero tolerance for resisting police". A few days earlier the Young Turks broke the story that the Federal Bureau of Investigation (FBI) listed  "Black Identity Extremists" (BIE) as a top priority in its fight against terrorism. The FBI considered BIE a higher priority than Al Qaeda and White Supremacists. According to the FBI documents they acquired, a program codenamed “IRON FIST” planned to use undercover agents to counter these BIE.

The news reminded some of the FBI's Counterintelligence Program (COINTELPRO) of the 1960's and 70's that targeted Black activism. It is important to understand how government agencies, in particular law enforcement, work to obstruct Black people from organizing. The history of COINTELPRO illuminates why so many Black radical and grassroots organizations were previously destroyed and why it remains so difficult to organize today.

COINTELPRO was created to maintain "the existing social and political order". It sought to "prevent the long range growth of militant Black organizations, prevent such groups from gaining respectability". In practice, this amounted to political repression and flagrant violations of first amendment rights to speech, to peacefully assemble, and to petition the government for redress of grievances.

COINTELPRO often worked in conjunction with and received information from local law enforcement "red squads" such as the Bureau of Special Services (BOSS), a special division of the New York City Police department (NYPD). Also known as the Bureau of Special Services and Investigations, its job was to monitor and surveil political radicals.These divisions often relied on informants and undercover agents. Ray Wood, a.k.a. Ray Woodall, was one such informant who, as a police officer for BOSS, infiltrated the Bronx chapter of the Congress of Racial Equality (CORE) in the early 1960s.  Some historians like Ward Churchill and Susan Brownmiller have written about Woodbut new information providesa clearer picture of how undercover agents contributed to COINTELPRO.

One of the most significant organizations of the Civil Rights movement, CORE was the first of the non-violent direct action groups. It pioneered many of the tactics and techniques that have come to characterize the movement. Bronx CORE was one of the most militant chapters and was best known for its 1963 demonstrations against employment discrimination at White Castle restaurants. At the height of the campaign, more than 1,000 counter protesters carrying Nazi and Confederate flags and symbols faced off against roughly two dozen CORE demonstrators.

During this same period, Wood infiltrated Bronx CORE, successfully gained its members trust, and became the chair of its housing committee. Wood was a delegate for Bronx CORE to CORE’s 1964 national convention, giving him the opportunity to meet CORE leaders from all over the country. Locally, Wood was a well-known figure and even dated women from other CORE chapters.

While secretly a police officer, Wood often was involved in campaigns that publicly challenged the police. Wood worked closely with Bronx CORE’s chairman Herb Callendar who launched a campaign against police brutality after the White Castle demonstrations. The NYPD commissioner criticized the campaign and characterized Callendar, along with Malcolm X and rent strike leader Jesse Grey, as the "three most irresponsible Civil Rights leaders in the city".

In 1964, Callendar, Wood and another Bronx CORE member carried out the chapter's most audacious action to date: a "citizen's arrest" of the Mayor of New York City (NYC). All three CORE members were themselves arrested but Callendar received an especially harsh punishment and wasplaced in the psychiatric wing of Bellevue Hospital. Callendar would later tell CORE's national director James Farmer that the idea to arrest the mayor came from Wood.(1)

Wood suggested illegal acts to radical groups in the hope the organizations would act on his suggestions and provide police the ability to arrest Black radicals. For example, Wood likely planted the idea to blow up the Statue of Liberty. In 1965, Wood was outed as an agent when a story appeared in the New York Times about his role in instigating a 1965 plot by another radical group, the Black Liberation Front (BLF), to blow up the Statue of Liberty.(2) This was a plan previously suggested to members of East River CORE. Even though he was not a member, Wood went out of his way to attend East River CORE meetings be involved and helpful. As he got to know members, he suggested they get involved in more militant actions likethe Statue of Liberty plan and robbing liquor stores to raise funds for East River CORE. Such actions would have done enormous damage to the reputation and public support of the entire national organization as CORE stressed non-violent action. Unbeknownst to the chapter, Wood was spying on members and eventually reported chapter head Blyden Jackson as a possible member of the Communist Party to the House of UnAmerican Activities Committee.

Further, Wood’s connection to East River CORE, combined with documented connections between members of the BLF and CORE in NYC, suggests Wood used CORE as a stepping-stone into other Black radical circles. Other historians, for example, have discussed how he infiltrated the Revolutionary Action Movement (RAM) in Queens and testified at the Panther 21 trial in the late 1960’s.(3)

By the 1970’s, Wood’s name had faded into obscurity. Historian Garrett Felber’s 2015 Guardian article about Wood reignitedinterest in him. Felber argued Wood mighthave been the mysterious second man arrested at the Audubon Ballroom when Malcolm X was assassinated. As part of the  research team for Manning Marable'sbiography of Malcolm X, A Life Reinvented, Felber found notes from Yuri Kochiyama, a member of CORE and the Organization of Afro-American Unity (OAAU) who witnessed the assassination. In OAAU meeting notes, Kochiyama, wrote that "Ray Woods" was "seen running out of (the) Audubon, was one of two picked up by police".

As Felber himself admits, the timing of Wood’s outingin the press (New York Times February 17, 1965) and the date of Malcolm X's assassination (February 21, 1965) means it is possible word already spread among activists about Wood's true identity. While this makes it more unlikely he would have been at the Audubon, it does not mean this theory should be completely discounted. His interactions with RAM and the Black Panthers in the late 1960’s suggests other Black activists in the NYC area may not have known he was an undercover police officer.

Regardless of if he was at the Audubon, Wood and other undercover agents like him had a detrimental impact on organizations like CORE. Wood was not just spying on CORE but was on a mission to "misdirect, disrupt, discredit and neutralize" CORE's leadership. He was acting as a provocateur. What resulted from these operations were not just literal assassinations such as the police murder of the Black Panther's Fred Hampton in Chicago, but character assassinations as in the case of CORE's Callendar and Blyden. Such operations demonized Black leaders in the public eye and thereby de-legitimized both the Civil Rights and Black Power movements.

While BOSS maintains its job was not to facilitate, instigate or provoke the committing of illegal actions, as time goes on, mounting evidence suggests that is exactly what such agencies were doing. What remains to be determined is if Wood's activities were unusual or the standard for BOSS and COINTELPRO.

Today, many of the activities of intelligence programs like COINTELPRO have been deemed illegal after the Church Committee hearings and the Handschu agreement. Nevertheless, recent programs like IRON FIST provide a warning thatthe FBI’s mission is unchanged.

In 2017, historian Robin Spencer wrote that the FBI’s labeling of current activists as 'Black Identity Extremists' was the latest version of COINTELPRO. While BIE's are described as individuals who "use force or violence in violation of criminal law in response to perceived racism and injustice in American society", they are also more vaguely defined as those interested in "establishing a separate black homeland or autonomous black social institutions, communities or governing organizations within the USA". This broad definition could potentially include rappers such as Jay-Z, Black Christian church groups, the Nation of Islam, and the Black Lives Matter (BLM) movement.

The Black Life Matters movement has characterized itself through non-violent direct action. The Guardian, however, ran another story in 2017 detailing how law enforcement used social media to keep BLM activists under surveillance and infiltrate their groups. These techniques fuel distrust within groups andmake it much harder to organize. Creating such an atmosphere of suspicion and paranoia was the goal of programs like COINTELPRO and agents like Ray Wood.

This distrust also affects scholars as it complicates efforts to research the history of the Civil Rights and Black Power movements. Some older activists of the 1960's and 1970's can be distrustful and refuse to be interviewed because of the history of journalists and scholars who have acted as agents. This frustrates efforts to learn about what effect these programs ultimately had on organizations such as CORE.

The history of COINTELPRO is essential to understand both for historians and current activists. There is still a great need to understand what happened to the activists and movement during this time period. We still do not understand the breadth of such programs and the damage done.

Currently, we cannot learn more because many of the program’s records are still classified. Releasing the records of these domestic spy programs could give scholars the tools needed to decipher this important time period in the Black Freedom Movement and give us a better understanding of how the legacy of these programs affect such activists today.