The History Briefing on Whistleblowers: How Historians Covered Breaking News 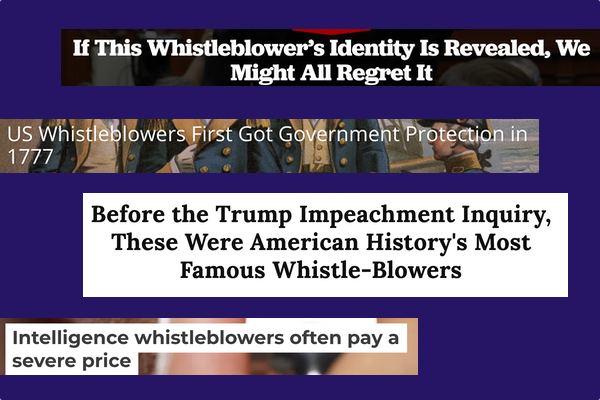 House Speaker Nancy Pelosi launched an impeachment inquiry into President Donald Trump last week. The impeachment came on the heels of a whistleblower complaint released to Congress and the Inspector General. The fallout from the complaint has created a media frenzy. Historians have helped us understand the historical context of whistleblowers.

Jennifer Lawerence, an Assistant Professor at Indiana University, wrote about the price whistleblowers pay for their risky actions. She noted multiple members of the intelligence community who have come forward as whistleblowers and faced retaliation such as Wiliam Binney, J Kirke Wiebe, Thomas Drake, Edward Snowden, and Chelsea Manning (all but Manning worked for the National Security Agency). These whistleblowers had to endure raids by the Federal Bureau of Investigation, confiscated property, prosecution, and even imprisonment. Lawerence added that whistleblowers from the intelligence community have historically lacked protections, specifically citing the ineffectiveness of the Intelligence Community Whistleblower Act of 1998, which still stands today. Her nuanced approach to history helps clarify the treatment whistleblowers had to face and exposes an ignored component of whistleblowing.

Christoper Klein, a writer who specializes in history, wrote an excellent piece discussing when American whistleblowers first got protection from the government. Klein explained that the first protections originated in 1777 and were intended to benefit the ten sailors and marines who reported improper behavior by the Continental Navy’s most powerful man: Commander Esek Hopkins. When the soldiers reported Hopkins to Congress, they were imprisoned on Hopkins behalf. As a result, Congress passed a resolution to encourage the revelation of improper conduct. The cash-strapped legislative body also covered the sailors’ legal fees to ensure they had “adequate legal representation.” Klein underlined the significance of whistleblowers from the earliest points in American history. This particular piece can be used to compare how the government acted years ago to how the government is acting now.

Olivia Waxman, a writer for Time’s history section, created her own historical review of whistleblowers throughout history. Waxman detailed how the principle of whistleblowing dates back to medieval England and ancient Roman law. In early Britain, people who witnessed a transgression could report it to the king’s representatives for a chance at a bounty. She continued on to describe the False Claims Act of 1863 (also known as Lincoln’s Law), which punished contractors who sold shoddy goods to the Union Army during the Civil War. These laws aimed to protect against fraudulent activity. Waxman discussed some famous whistleblowers in American history including A. Ernest Fitzgerald (who testified that Lockhead Martin was overcharging the government billions of dollars), Frank Serpico (who exposed corruption in the New York Police Department), and Daniel Ellsberg (who leaked the Pentagon Papers which described the government's mismanaging of the Vietnam War). Waxman's piece helps us understand the significant impact whistleblowers have had on American history and beyond.

Tom Mueller, a journalist and author of a forthcoming book about whistleblowing, also wrote an article about the history of whistleblowing for Politico Magazine. Mueller focused on the history of retaliations against “government truth-tellers.” One of the major cases he reviewed was the case against Thomas Drake of the National Security Agency. Mueller explained that as a result of Drake’s whistleblowing, he was indicted on ten criminal counts under various laws including the Espionage Act. Drake was threatened with thirty-five years of prison after the Federal Bureau of Investigation found what they deemed “highly classified” documents in his house. However, the Department of Justice’s case against Drake was so feeble that it collapsed on the eve of the trial. Mueller also explained how the Espionage Act is “regularly employed” to prosecute those who disclose national security information. He went on to explain that the Department of Justice under President Barack Obama aggressively used the Espionage Act to prosecute government employees who shared classified information. The Obama administration charged eight individuals in this process, more than any other president. Mueller’s incorporation of history helped to substantiate his growing fear: losing anonymity is almost guaranteed to bring professional and personal pain.