A Family History of the Red Scare

David L. O'Connor received his Ph.D. in history in 2000 from Stony Brook University, and is a history teacher at Paul D. Schreiber High School in Port Washington, NY. He is a Contributing Editor at HNN. 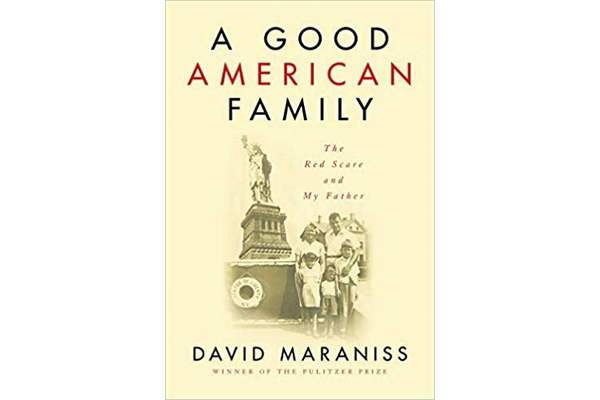 Who gets to decide what it means to be an American? It's a question of some urgency these days, and one that Pulitzer Prize-winning journalist David Maraniss addresses in A Good American Family: My Father and the Red Scare as he recounts the historical experiences of his father, Elliott. The elder Maraniss was a devoted husband, kind father and dedicated newspaperman, whose patriotic bona fides came under fire during the Red Scare of the early 1950s. The book is an interesting addition to Cold War historiography, combining analysis of major features of the Red Scare and a heartfelt family story.

The book opens on March 12, 1952, in room 740 of the Federal Building in Detroit, Michigan, as Elliott appears before the House Committee on Un-American Activities (HUAC), which had come to the Motor City ostensibly to root out alleged Communist subversives in the automobile industry.  Elliott was fired from his position at the Detroit Times for his refusal to “name names” and answer several questions posed by members of the committee. Afterwards, he was fired from his position at the Detroit Times and blacklisted from any meaningful work in journalism for several years.  However, this book is not simply an account of a man wrongly accused and punished for his radicalism.  Rather, Maraniss attempts to understand and reconcile his memory of his father as a good man and patriotic American with the fact that he was also a member of the American Communist Party (CPUSA) and in many ways an apologist for Joseph Stalin’s tyrannical regime.

The son of Jewish immigrants who fled Odessa, Ukraine, in 1890 to escape the Russian Empire’s rising anti-Semitism, Elliott grew up in Brooklyn where he attended Abraham Lincoln High School.  The school’s principal—a fascinating New York University alum who wrote his Ph.D. thesis on Baruch Spinoza—helped stoke Elliott’s idealism by encouraging him to find inspiration in Ralph Waldo Emerson’s “heart-stirring, untraditional, iconoclastic words about initiative, conformity, consistency, truth-telling, prayer, and independence.”  After graduating in 1936, Elliott followed a fellow Lincoln High alum, Arthur Miller, to the University of Michigan where he wrote for the school’s paper, the Michigan Daily, and became active in radical politics along with his future wife, Mary Cummins.  Maraniss describes his parents as young idealists: “They loved the promise of America, were disoriented by the economic collapse of the U.S. economy during the Depression, were seeking answers to the chaos of the world, and at the same time wanted to believe in a virtuous, peace-seeking, equality-minded Soviet Union.”   While he is fulsome in his praise of his parents’ idealism, Maraniss simply cannot understand how they could have also supported the Soviet system: “They thought they were working toward a true and open American democracy even as they were rationalizing the actions of what was in fact a ruthlessly totalitarian foreign power.”

The CPUSA’s craven servility to Stalin’s agenda in the 1930s is well known. American communists ignored, refuted, or attempted to justify Stalin’s horrific crimes such as the forced-famine in Ukraine and the Great Purges. In foreign policy, the CPUSA adhered to the Comintern-led Popular Front strategy by which Stalin ordered all communist parties around the world to work within any government to oppose Mussolini and Hitler’s aggression, an approach Elliott enthusiastically supported.   When the party abandoned its stated anti-fascist policy and defended the Nazi-Soviet Pact of 1939, many American communists quit the party.  Elliott did not.  He embraced the new Stalinist line and advocated American neutrality in World War II.  He even defended the 1939 Soviet invasion of Finland that crushed the Scandinavian democracy.  To his credit, Maraniss does not hide his father’s staggering willingness to justify Stalin’s machinations, and quotes an editorial Elliott co-authored describing the war as a “clash of rival imperialisms.” In a later edition, Elliot added: “This is not a war against fascism, it is not a people’s war and does not attack the vital causes of war.”  Trying to explain the inexplicable, Maraniss simply says:  “… he was stubborn with ignorance.”

The Japanese attack on Pearl Harbor apparently changed his mind. Two weeks after the attack, Elliott enthusiastically volunteered to serve in the U.S. Army, which Maraniss contends demonstrates his father’s patriotism. Though he concedes Elliott’s commitment to the war effort came only after Hitler launched Operation Barbarossa against the Soviet Union in June 1941, he defends his father’s motivations:  “It was not that my father felt more strongly about the Soviet Union than his own country.  In all his previous writings, he showed a deep belief in America and the American promise.  He was a patriot in his own way.”  Unfortunately, he provides no insights into Elliott’s reaction to Barbarossa or the way he rationalized yet another shift in his views on the fascist challenge.

Elliott’s military service got off to a rocky start.  The Military Intelligence Division of the War Department investigated him and concluded that he was “communistic” and potentially “disloyal.” (This was hardly a rash assessment. Subsequent revelations from the Venona decryptions and Soviet archives demonstrated the CPUSA’s many ties to Soviet intelligence, a fact Maraniss fails to note.)  Elliott did, however, serve with distinction, commanding an African American salvage unit in the segregated army, which suited his commitment to racial equality. Throughout the chapter on World War II, we hear Elliott’s views on the war and on the United States through the many letters he sent home to Mary and their newborn son:  “Jimmie [the author’s older brother], you know that I love you and your Mother very much.  I wouldn’t be a very good father, nor much of a man, if I didn’t stand up and fight against those Japs and Nazis.  That is why I am in the army and that is why I am going far away for a long time. Your mother, who is not only very beautiful but also very brave and very intelligent, understands all this.  And I know that you will understand too, Jimmie.”

Returning to the U.S. after the war, Elliott resumed his work for the CPUSA, secretly writing and editing two of the party’s periodicals while working for the Detroit Times, a breach of journalistic ethics. His commitment to the CPUSA was confirmed by Beatrice Baldwin, an FBI informant who provided Elliott’s name to HUAC and landed him in front of the committee in 1952.  Maraniss devotes considerable attention to the backgrounds of HUAC’s members, especially Chairman John Stephens Wood (D—GA), a committed segregationist who had flirted with membership in the KKK.  Maraniss explores Wood’s shady past not to justify his father’s actions, but to raise the intriguing question about who gets to decide who is American and who is un-American. Although he never provides a clear answer, Maraniss clearly suggests that Wood and the other members of HUAC were hardly representative of American virtues.

Elliott’s testimony (which Maraniss includes in full) was not especially dramatic.  The committee peppered him with questions that he often refused to answer, citing his Fifth Amendment rights, a tacit admission of guilt in the eyes of many Americans during the Cold War.  He was immediately fired from the Detroit Times and was unable to find work as a journalist for five years, supporting his family by taking whatever odd jobs he could find.

In 1957, as fears of the Red Scare dissipated, Elliott moved his family to Madison, Wisconsin, where he worked as a reporter and editor for the Capital Times for many years, earning the respect and admiration of his colleagues, family, and friends for his work. Maraniss proudly shares the anecdote of Ben Bradlee, the legendary editor of the Washington Post, saying:  “There’s Elliott Maraniss, a great editor.” As for his father’s ideology, Maraniss explains, “His politics changed, from radical to classic liberal, but not his values or belief in America—a generous spirit that he had carried with him since his days at Abraham Lincoln High School and that he expressed so powerfully in his letters to my mother during the war.”

Throughout the book, Maraniss struggles to explain just how his father could have been so deeply committed to admirable causes like racial and economic justice, free and open inquiry, and peaceful international relations while simultaneously following the dictates of Stalin.  He speculates that loyalty to friends and family, naiveté, and unbridled idealism, could have been factors, but ultimately he finds no satisfactory answer, in large part because his father never explained why he believed and acted as he did.  In the end, Maraniss and his readers are left wondering how a man of such vision could have been so blind for so long.