Trump’s Wall and the Aggrandizement of Despots 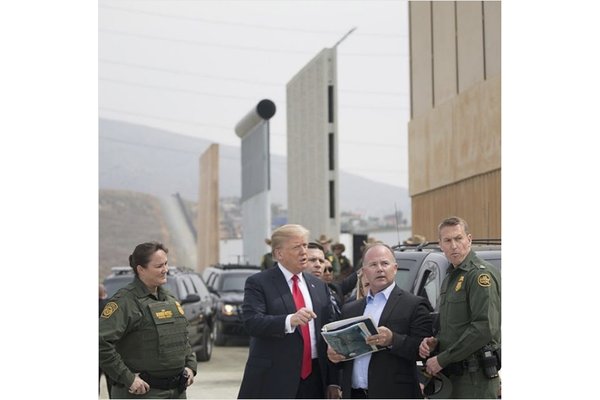 During the last week of August, The Washington Post reported that President Trump told aides to “fast-track billions of dollars’ worth of construction contracts, aggressively seize private land and disregard environmental rules.” He reportedly added that he would pardon any “potential wrongdoing.” Although acknowledging that an administration official insisted the president was only joking about pardons, the report reveals the extent of the president’s desperation to secure a victory before the 2020 presidential election. A week after the Post story, the U. S. Department of Defense authorized diverting $3.6 billion to fund 11 wall projects along the Mexican border.

Egotistical rulers like Trump often have grandiose architectural plans. Hitler had his “Germania,” his name for a new redesigned Berlin that would dazzle the world. Mao Zedong had his “10 Great Buildings” built in Beijing 1959. Stalin had his never-built Palace of Soviets, which was to be higher than the Empire State Building, and later, Moscow’s seven skyscrapers known as the “seven sisters.” As a candidate and heretofore as president, Donald Trump has been consumed by his dream of building "a great, great wall" on the United States–Mexico border. After announcing this when declaring his presidential candidacy in mid-2015, he added that “nobody builds walls better than me,” and that he would “have Mexico pay for that wall.”

For comparison with Trump’s wall obsession, however, let’s just concentrate on one despot’s architectural plans—those of Stalin. Although the idea of Palace of Soviets had been floating around for a while, it was not until August of 1932 that Stalin began to personally supervise its design by indicating specific alterations he wished in one architect’s plan. In 1933, he gave further instructions. They indicated various details in regard to shape, the need for the building to reflect the international solidarity of the proletariat, and, most importantly, that it be a monument to Lenin. Thus, Stalin wanted it to be topped by a gigantic statue of Lenin that would be much higher than the Statue of Liberty. To make room for the new structure, which was to be the tallest building in the world,  the massive Cathedral of Christ the Savior was destroyed (later rebuilt in post-Soviet Russia).

But the German invasion of the USSR in 1941 prevented Stalin’s architectural dream from being realized. Building materials for it simply could not be diverted from the war effort. Stalin’s penchant for gigantic buildings, however, resurfaced after Germany’s surrender in 1945. From 1947 to 1953 (the year of Stalin’s death), he had seven skyscrapers built. One of them, a new structure for Moscow State University (MSU) became the highest building in Europe.

According to Khrushchev’s memoirs, Stalin said, “We’ve won the war. . . . We must be ready for an influx of foreign visitors. What will happen if they walk around Moscow and find no skyscrapers?They will make unfavorable comparisons with capitalist cities.” Although Stalin wanted “to impress people” with the grandeur of buildings such as the new MSU one, Khrushchev thought “the whole thing was pretty stupid.”

Yet, neither Stalin, nor Hitler, nor Mao, ever obsessed about building any structure as much as Trump has about “the wall.” From the beginning of his presidential campaign to the present, no other topic has concerned him more—even his Mueller investigation worries did not begin until 2017. A May Washington Post article stated that he “has demanded Department of Homeland Security officials come to the White House on short notice to discuss wall construction and on several occasions woke former secretary Kirstjen Nielsen to discuss the project in the early morning.” He also repeatedly urged the U.S. Army Corps of Engineers and Department of Homeland Security to award the border-wall contract to a construction firm whose head frequently appears on Fox News and is a GOP donor.

Two primary reasons seem to propel Trump’s wall fixation. First, “the wall” is a clear symbol of his immigration policy, which demonizes immigrants crossing our southern border—“When Mexico sends its people, they're not sending their best. . . . They're sending people that have lots of problems, and they're bringing those problems with us. They're bringing drugs. They're bringing crime. They're rapists” (June 2015). More recently he warned of “invaders” coming across in “caravans.” The “wall” is the major symbol of his politics of fear and division.

Secondly, Trump not only considers himself a master builder, but a “master” at most things (“My I.Q. is one of the highest.” “I’m a smart person. I know how to run things. I know how to make America great again.” “I have a very good brain and . . . . I know what I’m doing.”). Thus, as The Washington Post reported, Trump is defying Congress and diverting military and other funds to build his “wall,” and he “is micromanaging the project down to the smallest design details. But Trump’s frequently shifting instructions and suggestions have left engineers and aides confused, according to current and former administration officials.”

In the face of expert opinions, he has agreed to build steel bollard fencing as opposed to a concrete wall, but he insists the bollards (or slats, as he likes to call them) should be painted black to make them hot and less climbable. He has also expressed a desire to arm the slats with sharp spikes that would cut the hands of any attempted climbers. And, like Stalin, “the higher the better.” As one official said in regard to Trump’s wall preferences, “He always wanted to go higher.”

In an earlier article, I mentioned “6 disturbing parallels between Stalin and Trump,” as well as some differences. Two of the former, their egoism and “politics of fear,” have already been suggested, and both men attempted to foster “a cult of personality.”

But Trump’s use of the catchwords “Make America Great Again” and “Build the Wall” indicates still another commonality between Stalin and Trump: a willingness and ability to successfully employ simplistic slogans. Like Stalin, for example, Trump has labeled political opponents “enemies of the people.” He has also encouraged “build the wall” rallies and apparel—one of his supporters (singer Joy Villa) wore a “Build the Wall” dress with a “Make America Great Again” purse to the 2019 Grammy awards. And in January 2019 Trump tweeted, “BUILD A WALL & CRIME WILL FALL.”

Such slogans cater to basic emotions like fear. Liberals and progressives sometimes find it difficult to understand the appeal of a Stalin or Trump—in 2019, six and a half decades after his death, Stalin remains tremendously popular in Russia. This failure, as Lionel Trilling indicated in 1950 and Rick Shenkman more recently, stems partly from underestimating the importance of emotions, myths, and non-rational political behavior.

Many of Trump’s slogans also reflect a populist and anti-intellectual mindset, an “us versus them” dichotomy that both Stalin and Trump often employed. Stalin frequently attacked “bourgeois specialists,” bureaucrats, and intellectuals, as enemies of the people. As a January 2017 Washington Post columnist noted: “Trump's campaign was pitched entirely at the idea that egg-headed wonks and liberal elitists—including the entire literary and entertainment culture centered on the two coasts—were not only deeply out of touch with the concerns of average Americans but also dismissive of them.” It went on to state that Trump views himself as channeling the will of the people, a group that has been ignored or laughed at by coastal elites over the past decade.”

Although the future of the “wall” remains uncertain, it would not be surprising, if unblocked, he follows the example of the man who changed city names to the likes of Stalingrad, Stalinbad, Stalino, and Stalinogorsk. Plastering his name on everything from hotels and casinos to planes and golf courses is already characteristic of Trump. And on a trip to George Washington’s Mount Vernon estate he commented that if our first president “was smart, he would've put his name on it. You've got to put your name on stuff or no one remembers you.”

Trump has already invaded our brains so that we will never again be able to hear “wall” without thinking of him. Maybe that will be enough for the “great wall-builder.” Or maybe he has heard of the “Great Wall of China,” and dreams that someday a “Great Wall of Trump” will help memorialize him.