It's time the public had a share in the past again 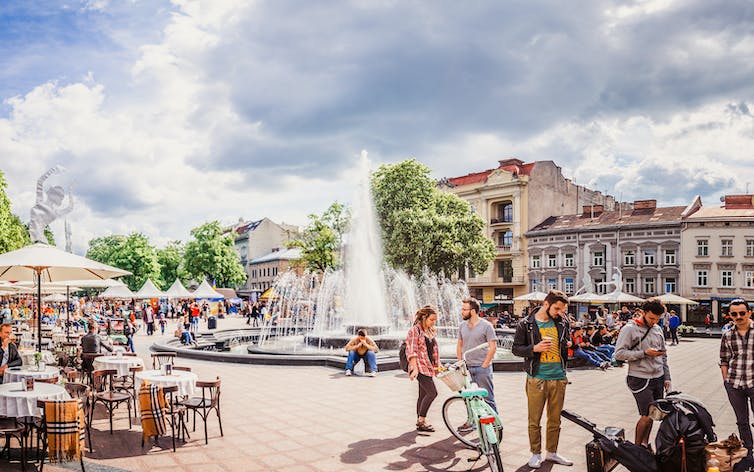 The Ukrainian city of Lviv has become a popular tourist destination over the past decade, as cheap flights make visiting ever more affordable. Downtown Lviv was added to the list of UNESCO world heritage sites in 1998 for its medieval townscape, where the narrow streets of the Polish, Ukrainian, Jewish and Armenian quarters testify to the city’s multicultural past.

Amid architecture ranging from the Renaissance to 19th century Art Nouveau, the old town buzzes with cafés and restaurants, guided tours and souvenir shops. Consumption tends to dominate these spaces: people are more likely to get artisan coffee or craft beer than take a stroll or sit on a bench, and many flats have been converted into holiday rentals or co-working spaces.

As in so many other post-industrial cities, these changes are the result of urban regeneration policies that mostly cater for visitors and the upwardly mobile “creative class”. The city council’s strategic plan prioritises sectors like tourism, education and IT, and as investment and affluent people flow in, it has transformed the historic centre.

This blend of conservation and gentrification has had benefits in Lviv, where entire districts stood crumbling and dilapidated until recently. But it has also hollowed out the inner city, making it a lot more crowded, predictable and sterile. Whatever the overall balance of these changes – whether or not more participatory governance programs, jobs in the creative sector and a sense of dynamism are thought to be “worth it” – Lviv is now a textbook example of heritage-based urban renewal.

The streets as museums

My own PhD research in Lviv uncovered a range of conflicts regarding heritage – especially over who gets to shape heritage policies, and to what end. The architects and conservation professionals I worked with who studied during the Soviet era often lamented the visible presence of consumption in the city today. The proliferation of coffee shops and hotels should have been controlled, they said, and controversial constructions around the UNESCO site should have been stopped.

Like all cities across the former Soviet Union and the Eastern Bloc, Lviv was run in a radically different fashion under state socialism than it is now. Much of the housing stock was in state ownership, and a top-down planning system encompassed everything from economic activities and tourism to conservation.

The Soviet Union is seldom thought of as a champion of heritage conservation, and for a good reason. Historic housing was notoriously unkempt, and protection efforts were concentrated on a select few monumental buildings. Reconstructions were often geared towards historic periods deemed less politically problematic: in Lviv, “bourgeoise” Habsburg and Polish heritage was ignored, while medieval fortifications were prioritised. 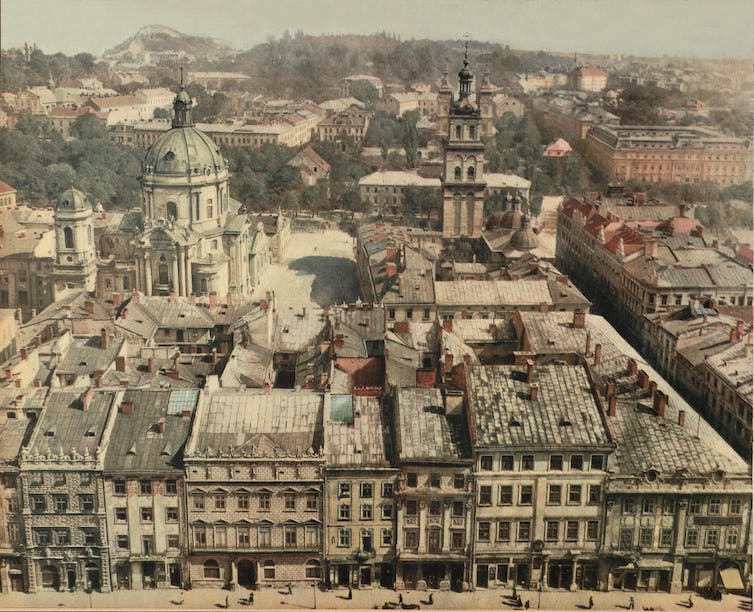 The way things used to be: a panorama of Lviv, from the pre-Soviet era. M. Münz/Wikimedia Commons.

But in some cases, Soviet-era conservation had bigger ambitions than the upkeep of buildings. Downtown Lviv was a “historic and architectural reserve” that enjoyed federal protection (the highest possible level) from 1975. There were no coffee shops, and hotels were placed around the historic zone, rather than inside it. Several museums opened there in the 1960s and 70s, and institutions that supervised conservation were also placed within the area.

The older architects and planners I spoke to called this approach “museification”: creating a zone dedicated the open-air display of the past, filled with museums and conservation workshops. Museification is a dream of a bygone regime, where historic zones were exempt from economic activities, and instead dominated by public and residential functions. There was no need to turn heritage into a valuable asset – it was actually impossible to commodify it.

Opponents of these elderly professionals often say that what they want is impossible under free market capitalism. They argue that the lack of funds made Soviet conservation inefficient: historic zones were never a high priority because their value was purely symbolic.

This is all true. Modern public-private partnerships offer a more efficient way to fund and maintain historic sites, especially in countries like Ukraine that struggle financially. But without needing to buy Soviet conservation wholesale, the idea of heritage zones – where the buildings’ use and function are regulated in the public interest – is worth revisiting.

A new vision of the old

When heritage fuels gentrification, a common problem is that public access to historic sites is curbed. Apart from the remaining museums and a few benches, inner city Lviv does not invite the elderly or the poor to participate in daily life. But concentrating public institutions in these zones could ensure they remained open to the public, and protect historic sites from being taken over by private companies, too.

Conservation as we know it is mostly about aesthetics: we usually preserve buildings, especially their facades, rather than the whole way of life they were once part of. It would be unrealistic to cling to defunct professions and bygone institutions. But heritage sites represent our shared inheritance from the past, so it makes sense to regulate more than looks, and promote uses that serve the wider public.

Increasingly, authorities are inviting communities to have a say in the fate of their heritage. But they often lack the means to take ownership of such spaces: a community theatre can rarely compete with cafés or office spaces. To take participatory heritage seriously, it’s necessary to ask what the current political and economic context allows for – and to stop taking such constraints for granted.

Bolder regulation could view buildings, not just as empty shells, but as public assets. Authorities could offer concessions for public or community groups, museums, require a mix of uses or impose bigger taxes on for-profit enterprises. Instead of being just a backdrop to the global franchise of tourism, historic areas would then instead reflect their communities in all their diversity. That way, heritage would fuel urban renewal for all citizens – not just the affluent few.