Edwin Black is the award-winning New York Timesbestselling author of IBM and the Holocaust and the journalist who revealed the design specifics of Iran’s nuclear warhead. 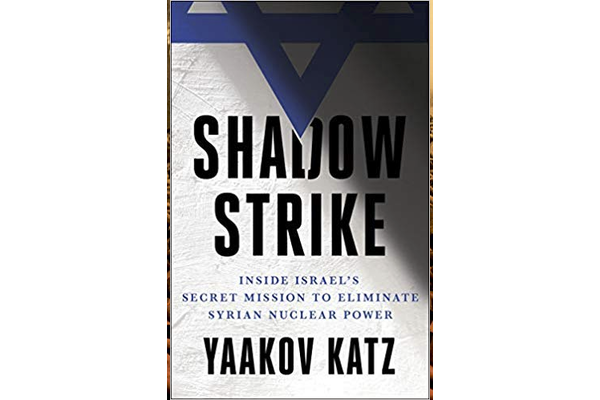 Jerusalem Post editor Yaakov Katz probably had no way of knowing that this would be a perfect time to release his briskly-selling Shadow Strike—Inside Israel’s Secret Mission to Eliminate Syrian Nuclear Power (St. Martin’s Press). Or did he?

The world’s attention is once again focused on the nuclear threat from Iran, generating kaleidoscopic theories about a potential military strike to disable Tehran’s program. Katz’s case study of the run-up and run-down to the Jewish state’s clandestine destruction of Syria’s nuclear attempt in 2007 is now an imperative read. Many will recall that for a long time, Israel refused to confirm that its jets had pre-emptively bombed a mysterious Syrianinstallation at Al Kibar. Only in 2018 did Jerualem admit that it had confirmed the installation was an undeclared North Korean aided nuclear site. To destroy the site, the Israeli Air Force (IAF) deployed a crack 8-plane squad of F-16s, F-15s and electronic jamming aircraft that hijacked Syrian radar blinding the country’s defense measures.

Katz flexes both his editorial sinews and his prior government connections as a former senior policy advisor to deliver a suspenseful chronicle, bolstered by rapid-fire precision and continuous in-room details. Understandably, this volume will be consulted time and time again by military theorists and diplomatic observerswhowonderhow another nuclear site destriction might be done—just in case it must be done again.

From the first “you are there” opening scene that details Mossad Chief Meir Dagan’s White House presentation on the Syrian threat, Katz skillfully surrounds each personality in the story with a rich biography and a functioning profile in the time frame. Readers are enveloped in more than the historical facts. They are transported to the tense, unfolding world of personalities, events, clashes, countdowns, and decision-making that resulted in the successful Syrian takedown.

For example, in Chapter 3, when introducing Israeli security cabinet official Rafi Eitan, the author ensures we know Eitan is more than just a security functionary taking notes. We are told that Eitan captured Adolf Eichmann and  visited an American reactor when 200 kilograms of highly enriched uranium disappeared and perhaps, who-knows, found their way to Israel’s ambiguous nuclear program in Dimona. Eitan also worked ground operations against the PLO in Lebanon and recruited and managed Israel’s infamous spy in the American naval establishment, Jonathan Pollard.

So intense is the detailing of the decision process that the actual bombing of Syria’s reactor is but briefly reported in a few paragraphs as an ipso facto of the narrative.

It might be easy to conflate the 2007 Syrian challenge to the current Iranian crisis. Syria was only taking preliminary steps toward nuclearization. Iran now has the essentials for a nuclear bomb that can be assembled and deployed within weeks, according to many experts.

Tehran’s endless centrifuge arrays have spun off enough kilograms of 99 percent Highly Enriched Uranium that can be compressed into an unstable and dense core encased in an R-265 Shock Generator configured in a bifurcated sphere lined with 5mm grooves filled with PETN explosive that can be ignited with microsecond precision to create the synchronous implosion that will absorbed by an exploding bridgewire, sturdy enough to transduce and focus the massive implosion force triggering a neutron initiator to fire one particle into the warhead core to create the atomic chain reaction that will clap forth a murderous mushroom cloud.

Additionally, Iran has developed a fleet of mobile Shahab-3 missiles derived from the North Korean No Dong, each with a nose cone large enough to carry the nuclear warhead. Tehran also possesses the flight guidance and ignition control to detonate such a warhead precisely 550 meters above the ground—mimicking the bombing of Hiroshima—thus unleashing a ferocious nuclear inferno. In fact, Iran recently test-fired such a Shahab-3 as a reminder that it still knows how to pull the trigger.

As an added factor, Iran wields a Russian S-300 missile defense system fully capable of protecting its nuclear program and strike assets. All this just raises the stakes on decision-making and decisions.

When reading Katz’s book, we are reminded that as complex and difficult as the Syrian strike was, any similar action on Iran’s nuclear capability would be infinitely more daunting and riskier.

Katz’s mastery of the facts and his relentless assemblage of puzzle pieces, together with his knowledge of the players and the potentialities, make Shadow Strike a powerful read. The volume also demands that Katz write another. No one knows if such a sequel will chronicle yet another shadow strike upon another nation to the north.