Before Trump eyed Greenland: Here’s what happened last time the US bought a large chunk of the Arctic

William L. Iggiagruk Hensley is a Visiting Distinguished Professor at the University of Alaska Anchorage.

Before Trump eyed Greenland: Here’s what happened last time the US bought a large chunk of the Arctic 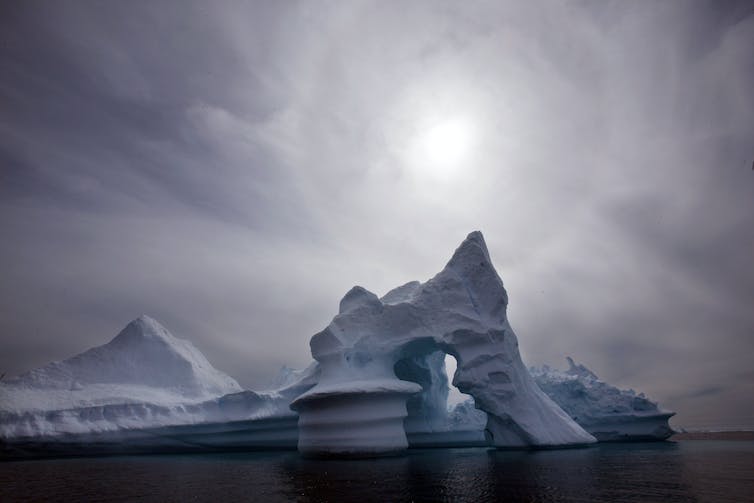 Most of Greenland is covered by Arctic ice. AP Photo/John McConnico

Editor’s note: Reports that President Donald Trump has urged aides to look into buying Greenland make us think of the last time the United States bought a major territory in the Arctic: the purchase of Alaska from Russia in 1867. Two years ago, we asked William L. Iggiagruk Hensley, a visiting professor at the University of Alaska Anchorage, to write about that historic sale.

On March 30, 1867, U.S. Secretary of State William H. Seward and Russian envoy Baron Edouard de Stoeckl signed the Treaty of Cession. With a stroke of a pen, Tsar Alexander II had ceded Alaska, his country’s last remaining foothold in North America, to the United States for US$7.2 million. 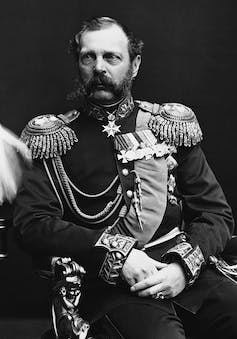 That sum, amounting to just $125 million in 2019 dollars, brought to an end Russia’s 125-year odyssey in Alaska and its expansion across the treacherous Bering Sea, which at one point extended the Russian Empire as far south as Fort Ross, California, 90 miles from San Francisco Bay.

Today Alaska is one of the richest U.S. states thanks to its abundance of natural resources, such as petroleum, gold and fish, as well as its vast expanse of pristine wilderness and strategic location as a window on Russia and gateway to the Arctic.

So what prompted Russia to withdraw from its American beachhead? And how did it come to possess it in the first place?

As a descendant of Inupiaq Eskimos, I have been living and studying this history all my life.

The lust for new lands that brought Russia to Alaska and eventually California began in the 16th century, when the country was a fraction of its current size.

That began to change in 1581, when Russia overran a Siberian territory known as the Khanate of Sibir, which was controlled by a descendant of Genghis Khan. This key victory opened up Siberia, and within 60 years the Russians were at the Pacific.

The Russian advance across Siberia was fueled in part by the lucrative fur trade, a desire to expand the Russian Orthodox Christian faith to the “heathen” populations in the east and the addition of new taxpayers and resources to the empire.

In the early 18th century, Peter the Great – who created Russia’s first Navy – wanted to know how far the Asian landmass extended to the east. The Siberian city of Okhotsk became the staging point for two explorations he ordered. And in 1741, Vitus Bering successfully crossed the strait that bears his name and sighted Mt. Saint Elias, near what is now the village of Yakutat, Alaska. 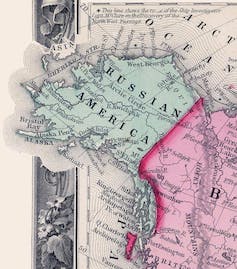 A map from before the U.S. purchased Alaska. Wikimedia Commons, CC BY

Although Bering’s second Kamchatka Expedition brought disaster for him personally when adverse weather on the return journey led to a shipwreck on one of the westernmost Aleutian Islands and his eventual death from scurvy in December 1741, it was an incredible success for Russia. The surviving crew fixed the ship, stocked it full of hundreds of the sea otters, foxes and fur seals that were abundant there and returned to Siberia, impressing Russian fur hunters with their valuable cargo. This prompted something akin to the Klondike gold rush that happened 150 years later.

But maintaining these settlements wasn’t easy. Russians in Alaska – who numbered no more than 800 at their peak – faced the reality of being half a globe away from St. Petersburg, then the capital of the empire, making communications a key problem.

Also, Alaska was too far north to allow for significant agriculture and therefore unfavorable as a place to send large numbers of settlers. So they began exploring lands farther south, at first looking only for people to trade with so they could import the foods that wouldn’t grow in Alaska’s harsh climate. They sent ships to what is now California, established trade relations with the Spaniards there and eventually set up their own settlement at Fort Ross in 1812.

Thirty years later, however, the entity set up to handle Russia’s American explorations failed. Not long after, the Russians began to seriously question whether they could continue their Alaskan colony as well.

The colony was no longer profitable after the sea otter population was decimated, Alaska was difficult to defend and Russia was short on cash due to the costs of the war in Crimea. 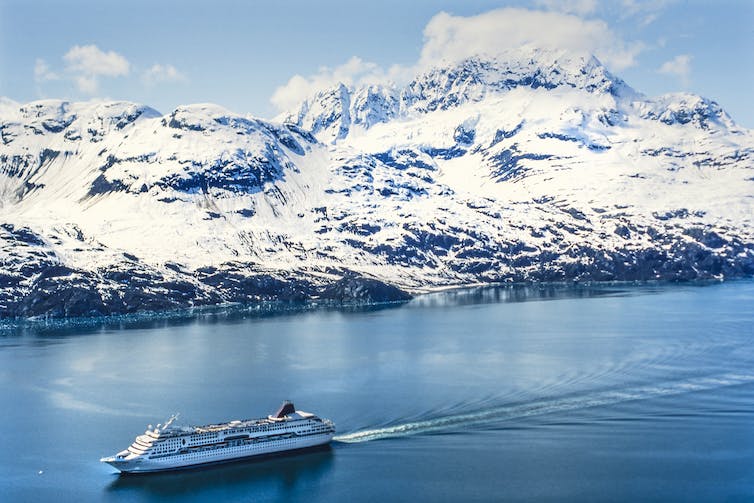 Americans eager for a deal

The Russians were ready to sell. But what motivated the Americans to buy?

In Alaska, the Americans foresaw a potential for gold, fur and fisheries, as well as more trade with China and Japan. The Americans worried that England might try to establish a presence in the territory, and the acquisition of Alaska – it was believed – would help the U.S. become a Pacific power. And overall the government was in an expansionist mode backed by the then-popular idea of “manifest destiny.”

So a deal with incalculable geopolitical consequences was struck, and the Americans got quite a bargain for their $7.2 million.

The U.S. gained about 370 million acres of mostly pristine wilderness – almost a third the size of the European Union – including 220 million acres of what are now federal parks and wildlife refuges. Hundreds of billions of dollars in whale oil, fur, copper, gold, timber, fish, platinum, zinc, lead and petroleum have been produced in Alaska over the years – allowing the state to do without a sales or income tax and give every resident an annual stipend. Alaska still likely has billions of barrels of oil reserves.

The state is also a key part of the United States defense system, with military bases located in Anchorage and Fairbanks, and it is the country’s only connection to the Arctic, which ensures it has a seat at the table as melting glaciers allow the exploration of the region’s significant resources.

This is an updated and shortened version of an article originally published on March 29, 2017.