Walkability Is at the Heart of Human Societies

Antonia Malchik has written essays and articles for Aeon, The Atlantic, Orion, High Country News, and a variety of other publications. Her first book, A Walking Life, about the past and future of walking’s role in our humanity, was published in May 2019. 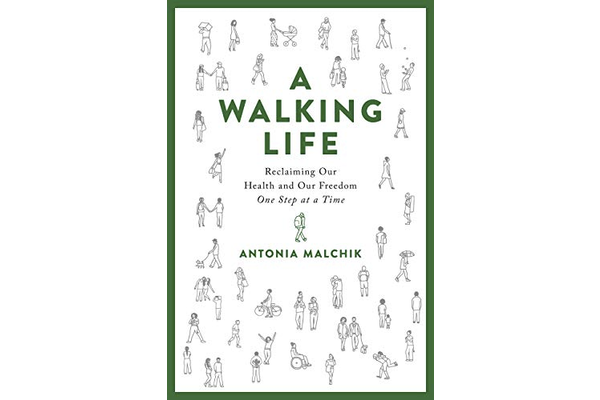 Until the 1920s to mid-1930s, public roads were for everyone. Cars had no greater claim to the space than cyclists, horses, wagons, or pedestrians. The fact that we no longer see walking or walkability as integral to human life is a huge shift in human history. The most recent anthropological research into early human life has shown the importance of walking in the formation and strength of human communities. By designing walking out of our lives, humanity loses something essential.

Our bipedal walking, unique among mammals, took millions of years to evolve and refine, yet nobody from evolutionary biologists to paleoanthropologists knows exactly why we do it. It’s unsteady and unsafe, yet somehow it lies at the core of what it means to be human. “There’s nothing necessary about walking on two legs,” wrote anatomist and anthropologist Alice Roberts in her book The Incredible Unlikeliness of Being. “Not many animals do it. It’s a stupid thing to do; you’re much more stable on four.” From a biological and physiological perspective, this statement is true, but it seems clear from anthropological evidence that human societies developed in part through the unique vulnerability bipedal walking encourages. Walking on two legs allowed human beings to use tools with their hands and run across the savannah, but it also made them physically unstable and very possibly contributed to the formation of tribes through trust and cooperation—because surviving alone was impossible.

“Community” is often presented as an abstract concept or a handy political slogan like “Main Street businesses” or “real American,” but true community rich in social capital and interpersonal interactions has always been essential to human survival and the evolution of human society. John Cacioppo, the director of the University of Chicago’s Center for Cognitive and Social Neuroscience until his death in 2018, studied loneliness for over twenty years before publishing his book Loneliness. In a 2016 interview he said that “Loneliness is like an iceberg, we are conscious of the surface but there is a great deal more that is phylogenetically so deep that we cannot see it.” The pain of loneliness, or “perceived isolation,” is profoundly linked to the evolution of our species and the formation of our societies.

Cacioppo describes loneliness as an evolved pain, one that developed over tens of thousands of years of evolution to force humans to give time and attention to their social connections. It’s not being alone that harms us; it’s feeling lonely. The deeper that neuroscience research delves into this topic, the more evidence researchers find that human beings require regular social interaction. Chronic loneliness isn’t just a state of mind; it’s an illness that leads to identifiable and dire physical consequences including compromised immunity, increased cortisol levels (an indicator of stress), depression, anxiety, and heart disease. Social isolation, wrote Cacioppo in Loneliness, is comparable to high blood pressure, lack of exercise, obesity, or smoking in its effects on human health.

Thel oneliness epidemic reinforces the need for walkability in our communities. Donald Appleyard, a professor of urban design at the University of California, Berkeley, ran the seminal study on walkability and social alienationin the 1960s. Dr. Appleyard found that people who lived in places with fewer spaces to encounter neighbors and strangers had far fewer friends and acquaintances than people who lived in high-traffic areas. More recent research from the U.K. as well as the U.S. has shown that neighborhoods with low walkability have far less social capital than those that are designed with walkability in mind, meaning, in essence, that communities without walkability lack a sense of neighborliness and have higher levels of isolation.

In Los Angeles in 2016, actor Chuck McCarthy launched a “people-walking” business whose success bore out the craving for the human interaction that walkability can bring. He initially charged $7 per mile to walk with people along streets or through parks and the response was so positive that by 2019 he had a full-time business with employees and had developed an app. People feel isolated not necessarily because they don’t have friends, said McCarthy, but due to “fluid schedules in the gig economy,” meaning it’s difficult to coordinate spending time with friends and family. “We’re on phones and computers constantly communicating,” McCarthy said, “but we’re not connecting as much. We need that human interaction.”

American society has for decades promoted the idea of individual strength as the key to success—Laura Ingalls Wilder’s Little House on the Prairie books, for example, depict her pioneer family fending for themselves, surviving and carving out a completely self-sufficient life. At least, that’s the mythology. But the truth is that the Ingalls family depended completely on the support of the various communities they lived in for everything from financial loans to medical care to food to fend off starvation in winter.

The myth of self-sufficiency and independence, however, remains powerful in American culture, and contributed the eventual trend of single families living in communities that required transportation to get them from one place to another without having to interact with other people. In other words, far-flung suburbs, car ownership, and heavy investment in highways to serve both.

We severed ourselves from one another, thinking it would make us free. Instead, the outcome has been a gnawing, widespread loneliness that manifests itself as depression, anger, existential angst, and any number of personality quirks and mental illnesses. Loneliness has become an epidemic, a combination of isolation and lack of exercise depriving our psyches of purpose, stimulation, and the companionship of others.

We’ve forgotten about shared space, about public roads, and the fact that tens of thousands of years of human history demonstrates a profound need for the daily, in-person interactions walkability provides. It is this forgetfulness that allows us to roll across crosswalks and through intersections with our eyes and attention on the smartphone. Forgetfulness also makes us think we don’t need walking. Critics might claim that restructuring towns and cities to be walkable is almost un-American, but in truth it’s the most practical and accessible way to strengthen our relationships, our communities, and ourselves.