by Louis B. Gallien, Jr.

Louis B. Gallien, Jr. is Professor in the Honors College and the Reich College of Education at Appalachian State University. He also coordinates the Southern Studies Program for the College of Arts and Sciences. 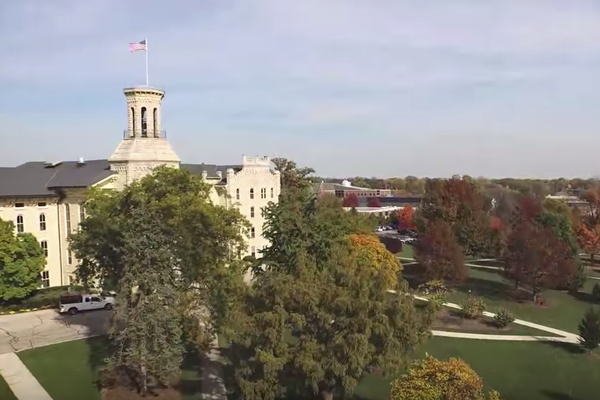 The recent controversies at my alma mater, Taylor University, over the invitation of Vice President Mike Pence’s to deliver their Commencement Address have illuminated the continued fissures at evangelical Christian colleges like Wheaton College (issues of race and gender), Gordon College (issues of sexual identity and gender discrimination), and Azusa Pacific (same sex dating) in this last decade. Some Christian Colleges like Eastern Mennonite and Goshen College have chosen to voluntarily disassociate themselves from the Council of Christian Colleges and Universities(CCCU)—the touchstone organization for evangelical colleges and universities in North America—because the CCCU opposed their internal decisions to include homosexuals in undergraduate admissions and faculty and administrative hires.

At Taylor, the decision of university president Lowell Haines (ironically, a well-known long-haired folk and rock singer at TU in the Seventies), to invite the Vice President to graduation exposed the nascent political and social divisions among faculty, students and alumni that all previous TU Presidents had managed to avoid by their collective decisions not to bring divisive political figures to campus. As a direct (or indirect result) of these long-held political boundaries, the relatively new President decided to resign just weeks after Commencement while the University was in the midst of a new strategic plan with an ensuing Capital Campaign. It was clear that the President was “caught off guard” as to the vast ranges of evangelical thought among his constituencies.

It would be easy to assume that the recent strains among evangelical higher education institutions are just the result of Protestant divisions that are ubiquitous throughout history. However, the history of American evangelicalism suggests something completely different: evangelical colleges are returning to a uniquely radical American nineteenth century evangelicalism. This was especially the case with Christian colleges with no denominational control such as Wheaton, Taylor, Gordon, etc.  In the past century, Wesleyan scholar Don Dayton wrote Discovering an Evangelical Heritage, a small book about the conflicted identifies of American evangelicalism that had a profound impact on Christian college campuses. Dayton chronicled the lives of nineteenth century evangelicals like Theodore Weld, Jonathan Blanchard, Charles Finney, the Tappan Brothers and other abolitionists of the antebellum period that founded colleges like Oberlin, Knox, Grinnell, Berea, Wheaton and a host of other Midwestern colleges with egalitarian visions of race and gender accompanied by a heavy critique of our political establishments. These colleges were a true reflection of a radical evangelical re-visioning of the United States through liberatory practices towards women and African Americans in their teachings, theologies and political and social activism. Understanding the history of these colleges led to a more complex understanding of American evangelicalism that includes a totally different brand of Christianity than twentieth century fundamentalism with its rigid social rules and literal interpretations of Scripture.

The most radical and renowned evangelical leader of that period was John Brown who was “…The only white man worthy of a membership in the NAACP” according to W.E.B. DuBois. As most students of American history know, Brown and his family considered themselves part of a “martyr-age” of evangelicals who would live and die for the emancipation of enslaved African Americans. Brown’s motivation was based on Scripture, especially the Old Testament that proclaimed: “God hath made one blood of all nations”.

The antebellum evangelical movement and Fundamentalists disagreed over issues like the role of women in the church, racial segregation, creationism and science, the definitive role of Scripture in faith and practice, and other theological issues that were informed by a premillennial view of the End Times. Thus, fundamentalist and evangelical churches both quietly (and sometimes openly) argued with each other until the issues were settled in civil courts, legislation, and within other societal structures.

After the Civil War and moving towards the Twentieth Century, this post-millennial evangelicalism faded with the aftermath of World War I. After witnessing the devastation of the war,  few theologians believed that the world would continue to improve and thus usher in the Second Coming of Christ. The Fundamentalist movement was birthed from the Progressive Era as a counter to the secular teachings and influence of Marx, Freud, Darwin and the higher criticism of Scripture taught on college campuses and infiltrating main-line Protestant denominations.

Thus, many former evangelical colleges like Wheaton (and others) pulled inward and did not engage the wider collegiate academic culture that was perceived to be hopelessly secularized. Many Anabaptist institutions were the exception and it can be more readily understood why Eastern Mennonite and Goshen have departed from fundamentalist teachings on race, class and gender because of the nature of its oppositional culture.

Other-worldly fundamentalism held its sway in interdenominational collegiate and church institutions until a small group of post War evangelicals (i.e. John Hoekenga) began a new movement in 1947. Inspired by Carl Henry’s National Evangelical Association, this group of influential and intellectual evangelicals attempted to consolidate and organize the more moderate wing of the evangelical movement.

After the relatively calm period of the post -War Eisenhower administration (and with the election of our first Catholic President John Kennedy), the turbulent Sixties with the Vietnam War, Vatican II, women’s movement and the Civil Rights Movement spotlighted social issues that the Church had not effectively dealt with since the nineteenth century. Taken as whole, these issues animated more evangelicals to splinter into smaller political and social interest groups represented by journals such as Sojourners, Christianity Today, Christian Herald and a slew of non-denominational publications from more fundamentalist institutions like the Sword of the Lord out of fundamentalist Tennessee Temple University. Right-wing preacher and broadcaster Carl McIntire from New England, University President Bob Jones in the Deep South, popular Midwestern broadcaster Dr. M.R. De Haan, and other popular radio broadcasters attempted to counter the more inclusive messages from the moderate to liberal voices of the  new evangelicalism represented by Billy Graham.

Many historians agree that the defeat of Jimmy Carter in 1980 by Ronald Reagan signaled a significant divide between the progressive evangelicalism represented by Carter over against the conservative policies and personal testimony of President Reagan’s born- again experience. Even though Reagan rarely attended church (and was a divorced man—an anathema to conservative evangelical groups), nevertheless, like Donald Trump, evangelicals believed that Reagan’s policies such as “trickle-down” economics fit their newly found upper-middle class lifestyles which birthed both materialism and Mammon—or, the love of money, which Charles Finney had warned evangelicals against in the last Century and predicted would end the evangelical movement in America.

The Reagan administration also made evangelicals feel less guilty about their clear responsibilities to the poor (for which there are over two thousand admonitions in Scripture). Also tied to issues of class were the ubiquitous and conflicted issues of race and gender tied to women’s ordination and the racial integration of churches and colleges. These issues were resurrected by the Civil Rights Movement, (which few white evangelical leaders joined) however, other main-line Protestant denominations felt that these social issues must also be resolved within their churches. As a result, the ordination of women and the wider acceptance of African Americans in positions of authority and empowerment moved slowly along, leaving evangelical Christian colleges in both a modern- day quandary and debate.

Issues of race, class and gender, joined by the growing acceptance of the LGBT community within society and main-line churches, (like the Episcopal Church of the United States and other main-line Protestant denominations) also influenced a new generation of young evangelicals. With the election of our first African American President in 2008, Barack Obama, a self-professed Christian and member of a controversial minister’s (Dr. Jeremiah Wright) church (Trinity United Church of Christ—Chicago) and a recent “convert” to endorsing gay rights, the debates on campus and in most churches began in earnest and furthered the generational divide among evangelicals.

Thus, the current evangelical divide has long-standing historical roots. In addition, I identify three systemic causes behind this wide chasm of evangelicals that threaten the future existence of their institutions above and beyond growing costs and competition with state institutions.

1. Students at evangelical colleges no longer look solely to Scripture in order to make decisions on issues of human sexuality. While a literal interpretation of Scripture is a main tenet in fundamentalist churches (and some conservative evangelical institutions), it is no longer the only touchstone for student’s moral decision making. Also, the complex world of biblical hermeneutics (and who speaks for God in a post-modern era) has made it difficult for younger evangelicals to make universal moral proclamations. In Wesleyan centered churches, (like Anglicans and Methodists) the theological quadrant of Scripture, Tradition, Reason and Experience is being more widely applied to decisions on human sexuality and other moral issues. Thus, for some evangelicals, Experience, or, (the subjective role of Holy Spirit) has superseded literal interpretations of Scripture in support of same sex rights and other controversial moral issues.Further, sexual norms in general are not as salient or relevant to younger evangelicals. The former taboos of living together and pre-marital sex are just about non-existent among the young.  The former teachings and admonitions of complete abstinence before marriage or living together without a license never took hold on this current generation. And, for some evangelicals, same sex relationships were part and parcel of these former prohibitions. They did not hold up to the standard of reason or in the experience of peoples whose lives they respected.

2. The Reagan Revolution generation of evangelicals are perceived by younger evangelicals to be pre-occupied by health, wealth, literal interpretations of Scripture, the coming Apocalypse and individual rights. There is also a deep division over the face and nature of secular Presidential leadership. There is a deliberate divorce among older evangelicals’ attitudes between Donald Trump’s personal life and the policies that he favors that directly benefit them. Gone are the days when you hear the comment “worldly” as a pejorative admonition among fundagelicals and the obvious conspicuous consumption among mega-churches.

3. There is a current generation of evangelicals (like Sojourners led by Jim Wallis in D.C.) and other popular authors and speakers like (Tony Campolo, Rob Bell, Matthew Vines) that are harkening back to a radical evangelical heritage of the nineteenth century and; thus, the current face and nature of evangelicalism as personified by media driven leaders like (Franklin Graham, Jerry Falwell, Jr. Jim Dobson) who are considered by these young evangelicals as culturally bound, both worldly and other-worldly and [they] are perceived to compromise their professed values to their current material comforts as imaged in this current Presidential administration. This distaste of America’s secular leaders (along with keeping a considered distance from the current crop of evangelical leaders that they believe compromise their values for the “approval of men”) echoes John Brown’s contempt for compromising Christians and slaveholders during the Antebellum period of U.S history.

If these trends continue, then, I believe that evangelical colleges will collapse from within. They are already facing a steep enrollment decline largely because their alumni base is not sending their children to their alma maters. They do not see either the spiritual need or the monetary value since there are so many “good” secular universities with active Christian groups on campus that cost a lot less, and, driven by the current vocationalism and student debt, financial reserves are also a major threat to these institutions.

The cultural ramifications of these social and cultural upheavals on their Churches is also profound. As denominational churches and the evangelical movement (as represented by mega-churches) continue to differ on their stances towards the acceptance of LGBT church members and priests, pre-martial sexual relationships, multicultural church bodies and the face and nature of American hyper-capitalism, both church and college structures will continue to divide their institutions and the degree to which Christians can and will compromise their spiritual values against secular realities will continue to be debated.