Bethany Berger is the Wallace Stevens Professor of Law, University of Connecticut.

A key presidential election is approaching. The U.S. Supreme Court hears a case with powerful political implications. The court rules, but the populist president doesn’t care. Our national commitments – to the Constitution, to morality, to the rule of law – seem at risk.
Then, the president backs down. The nation survives.

Like the modern relationship between the president and the court, the case dominated public debate, raising deep questions about the endurance of the rule of law. At the height of the crisis, former President John Quincy Adams wrote, “The Union is in the most imminent danger of dissolution.”

Worcester v. Georgia had its genesis in disputes between the Cherokee Nation and the state of Georgia.

Treaties between the United States and the Cherokee Nation solemnly guaranteed the the tribal nation independence on its reservation in Georgia. But Georgia wanted the Cherokees gone, particularly after gold was discovered on their land.

The United States tried to convince the Cherokees to move west, but most refused to leave their homeland.

In response, Georgia passed laws asserting its control over the reservation, prohibiting the Cherokee government from meeting and posting guards over the gold mines. President Andrew Jackson did nothing to stop this violation of U.S.-Cherokee treaties. Instead, at the request of the Georgia governor, he removed federal troops from the reservation.

The Cherokees mounted a legal challenge, and tried to take their case to the Supreme Court. Their lawyer, William Wirt, and the justices worried that President Jackson would not enforce a decision in favor of the Cherokees.

But, Wirt told the court, “What is the value of that government in which the decrees of its courts can be defied and mocked at with impunity … It is no government at all.”

Chief Justice John Marshall, however, ducked the issue, holding that the court lacked jurisdiction over the case. 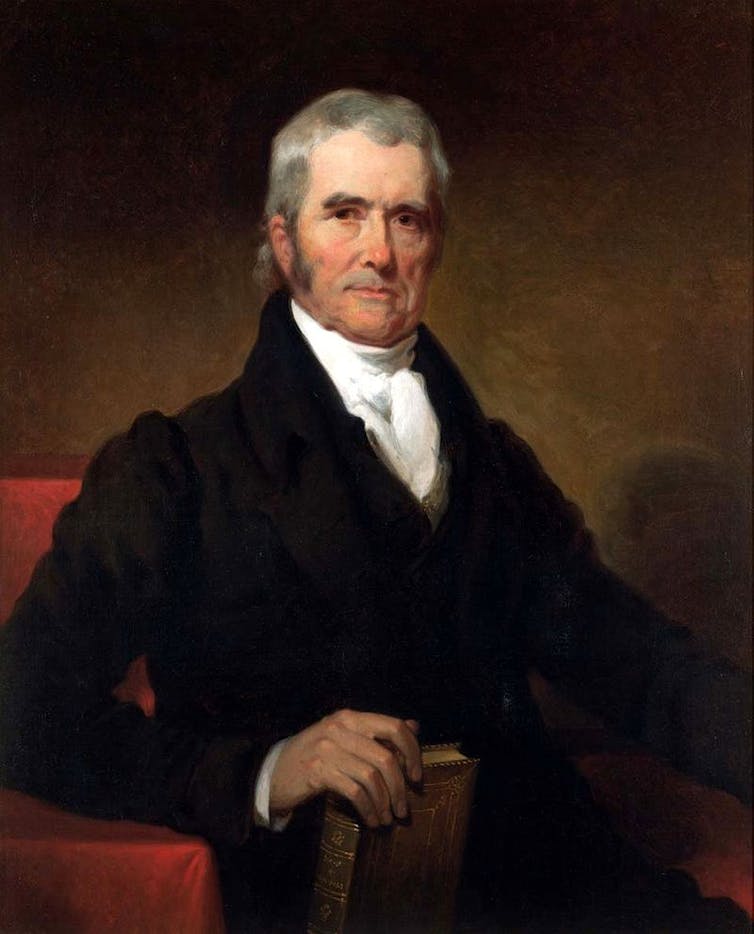 Georgia wasn’t done attacking the sovereignty of the Cherokees. In 1830, the state demanded that non-Indians take a loyalty oath to Georgia before going onto the Cherokee Reservation. Missionaries Samuel Worcester and Elizur Butler – both pro-Cherokee and anti-slavery – refused to sign.

The law made an exception for federal employees, and Worcester had served as federal postmaster, but Georgia persuaded the Jackson administration to dismiss Worcester so the exception would not apply.

The state sentenced the missionaries to four years of hard labor. Because the case pitted Georgia against Worcester, a citizen of Vermont, the Supreme Court could hear the case directly, rather than on appeal from the state courts. The court could finally rule on Georgia’s authority over Cherokee land.

The ‘supremacy of the laws’

The case was argued in 1832, an election year, and Jackson’s opponents campaigned on his disregard for the courts. 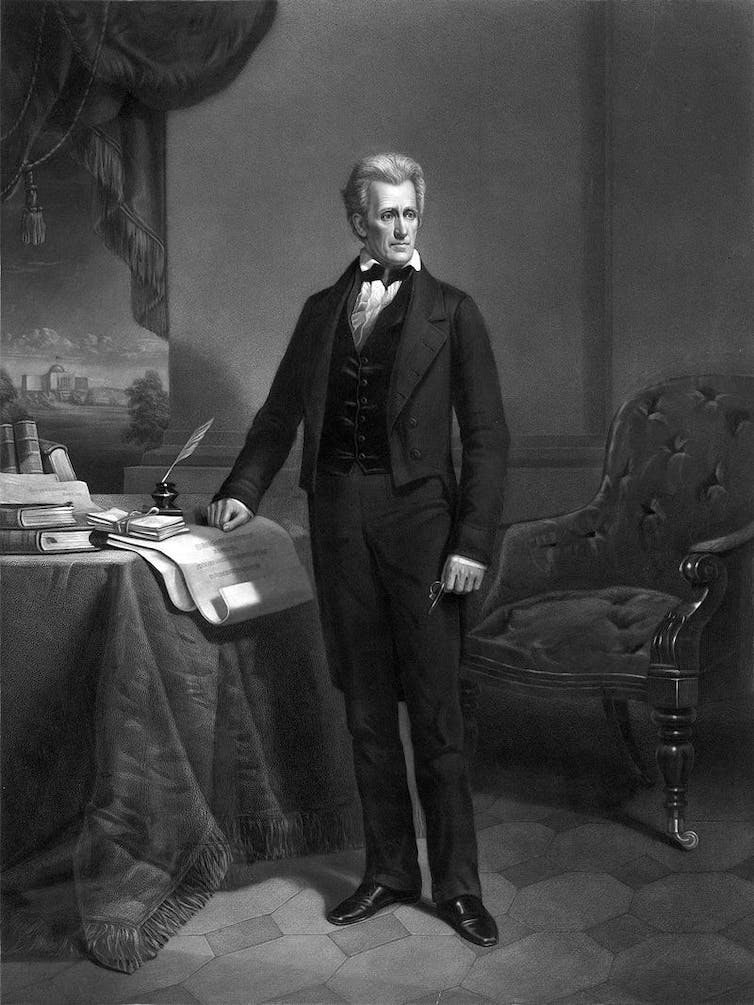 Speeches at the National Republican Convention, where they nominated the candidate Henry Clay to challenge Jackson, condemned Georgia’s “inhuman and unconstitutional outrages” against the missionaries and praised Jackson’s opponent Clay as a man who would “assert the supremacy of the laws.”

For Chief Justice John Marshall, approaching the end of his career, the case and the election might decide whether his legacy in building a strong and independent Supreme Court would survive him.

Georgia, meanwhile, signaled its disdain for the court by refusing to even appear for oral argument in Worcester.

Federal treaties, the chief justice wrote, “solemnly pledge the faith of the United States” to protect Cherokee self-government; the Constitution made those treaties “the supreme law of the land.”

Georgia’s attempt to govern the reservation, therefore, was “repugnant to the constitution, laws, and treaties of the United States.”

But Georgia did not care, and Jackson would not force it to release the missionaries.

When the Georgia Guard jailed Cherokees for celebrating the decision, Jackson wrote his brigadier general that the “decision of the supreme court has fell still born.” Newspapers across the country reported that Jackson refused to enforce the decision. That July, in vetoing another bill, Jackson declared that the court had no power over the president.

The chief justice wrote despondently, “I yield slowly and reluctantly to the conviction that our Constitution cannot last.” 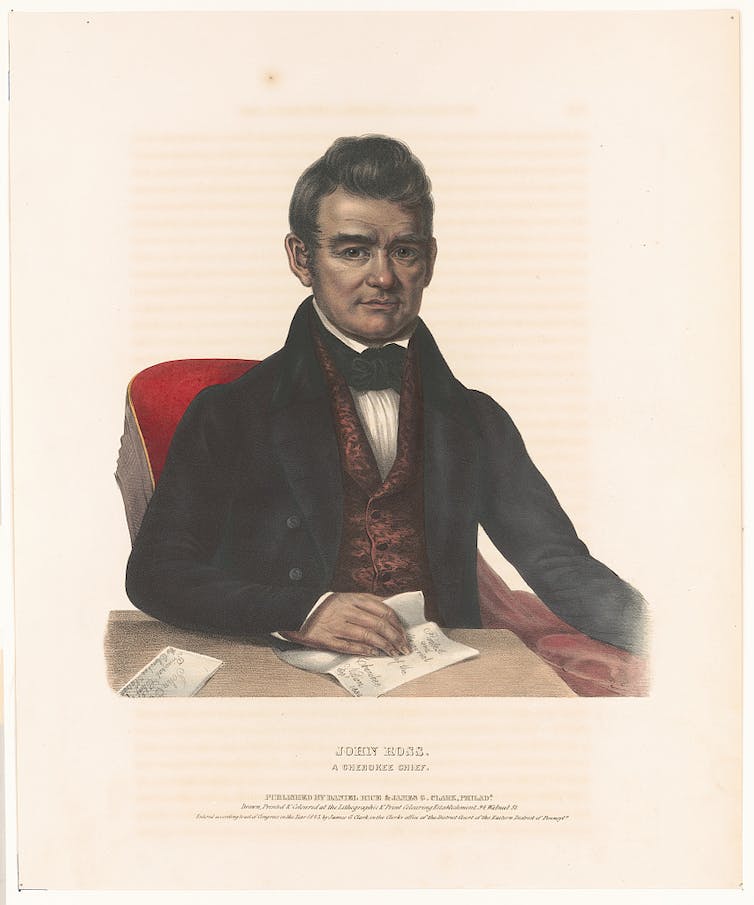 Perhaps Trump was channeling Jackson, his favorite president, when he tweeted that there would be a citizenship question on the census a week after the court ruled against his administration’s attempt to add one. Certainly the assertion raised – as Trump has throughout his presidency – a threat to the constitutional balance of powers

But Jackson quickly realized that failing to enforce federal law in Worcester had dangerous repercussions.

Jackson condemned the state and supported a “Force Bill” that, for the first time, gave federal marshals clear power to enforce U.S. laws. Any doubt that federal officials could not force Georgia to release the missionaries was gone.

Rather than force a public confrontation, Jackson’s allies went to Georgia Gov. Lumpkin and persuaded him to pardon the missionaries still languishing in jail.

The constitutional crisis was averted. 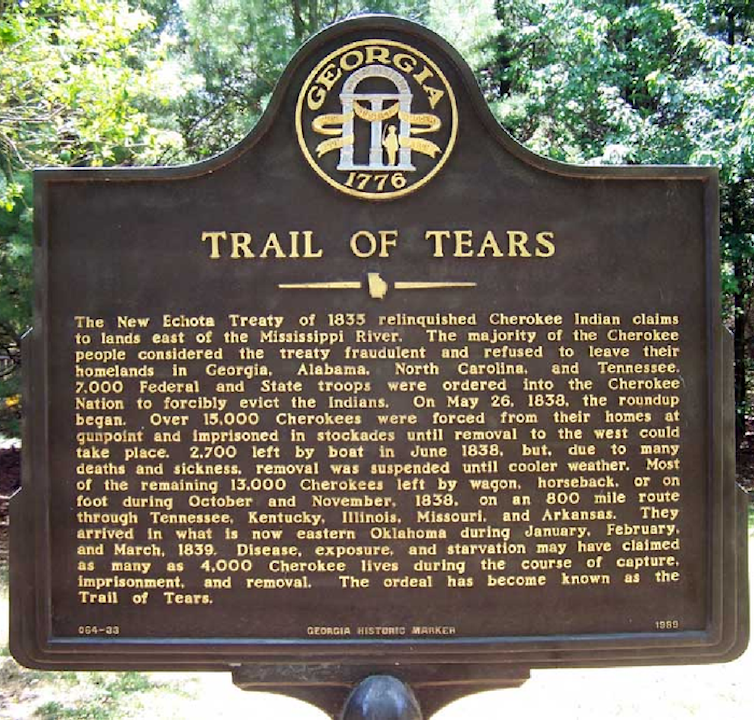 A historical marker in Georgia for the Cherokee Trail of Tears. Author supplied, CC BY

Removal in a different way

All did not end well for the Cherokees.

In 1835, while Cherokee Principal Chief John Ross was in Washington seeking protection from the U.S., Jackson’s agents got individual Cherokees to sign a treaty agreeing to move to a new reservation west of the Mississippi.

On the strength of the false treaty, the U.S. rounded up the Cherokee people and forced them west. The Trail of Tears – a forced march on which one in four Cherokees died – is a dark legacy of Worcester.

But today, Worcester v. Georgia also stands as a monument to both tribal sovereignty and judicial independence. At the height of the backlash against Brown v. Board of Education, Justice Hugo Black called Worcester one of Justice Marshall’s “most courageous and eloquent opinions,” which, “despite bitter criticism and the defiance of Georgia … came to be accepted as law.”

And as President Trump agrees reluctantly to respect the court – at least in the case of the census – he follows, in part, that long-ago legal victory of the Cherokee Nation.