Adrian Gilbert is a military author who has written extensively on World War II. He is the author of WAFFEN-SS: Hilter’s Army at War, published in June 2019 by Da Capo Press. 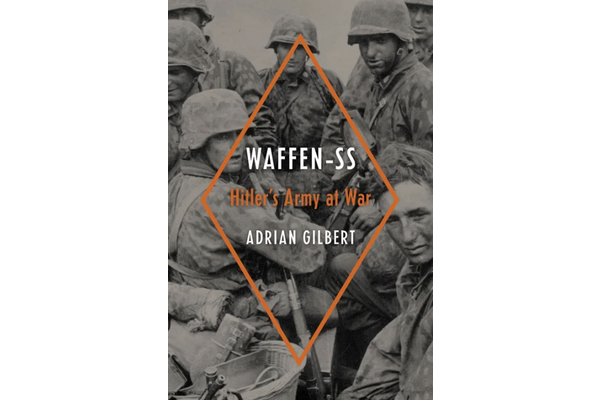 The military collapse of Germany in 1945 was so total that any fears held by the Allies of a Nazi revival were soon dissipated. The success of West Germany as a successful, democratic state confirmed the view that Germany’s militaristic history really was a thing of the past. And yet the specter of Nazi Germany has never completely disappeared, the exploits of the Waffen-SS continue to provide inspiration for extreme right-wing nationalists. More recently there has been a trend to rehabilitate Waffen-SS veterans from Eastern European countries and to reconsider them as patriots rather than agents of Nazi tyranny.

The Waffen-SS was just one of many strange organizations to emerge from Nazi Germany. Originally intended as an elite palace guard to protect Adolf Hitler it grew massively in size and scale to become a multi-national army, the military wing of Heinrich Himmler’s dreaded SS. Of the 900,000 men passing through its ranks, approximately half were drawn from countries outside the German Reich, some even recruited from ethnic groups normally considered beyond the Nazi racial pale.

During the course of World War II, the armored formations of the Waffen-SS gained a reputation for excellence on the battlefield, a reputation that had to be set against its involvement in the mass killings of civilians and numerous battlefield massacres. In the aftermath of defeat in 1945, the Waffen-SS was not only judged to be a criminal entity by the Allies but was also condemned by many old comrades in the Wehrmacht, the German armed forces, eager to pass on blame for the many atrocities committed by Germany during the war.

In response, former Waffen-SS soldiers established HIAG, a self-help group to lobby the new West German government for improved material conditions for its members and to promote the idea that the Waffen-SS was an honorable body of soldiers, similar to those of the German army. The advent of the Cold War reinforced and expanded this narrative, the SS veterans arguing that the multi-national Waffen-SS was a forerunner of NATO and a saviour of Western civilization from Soviet barbarism.

The concept of the honorable Waffen-SS achieved some traction, not least in forming its own sub-genre of military publishing. The memoirs and divisional histories written by former SS soldiers were taken-up and amplified by a new postwar generation of enthusiasts in the United States and Western Europe. They also provided a convenient ideological template for the various Neo-Nazi and extreme right-wing groups that emerged in Western Europe during the 1950s, who drew heavily on the distinctive iconography of the Waffen-SS. In the long run, however, these groups achieved little: they were rent by internal division, reviled or simply ignored by the general public and subject to hostile scrutiny by national security services.

Behind the Iron Curtain, any form of celebration of the Waffen-SS would have been unthinkable – a treason against the memory of the Red Army’s victory over Nazi Germany. But this would all change with the fall of the Berlin Wall in 1989 and the collapse of communism in Eastern Europe.

In many of these countries, the long years of Soviet domination were conflated with those of Nazi Germany. Resistance to Soviet rule was always based on nationalist lines, and any organization that even appeared to have fought for national sovereignty became an object of veneration, and in the 1990s this included the Waffen-SS. The governments of Hungary, Latvia and Estonia were in the forefront of this new welcoming attitude, even sending ministers to preside over SS commemorations. In actuality, Hitler and Himmler – totally opposed to any concept of national self-determination – had cynically employed these soldiers for anti-partisan duties or as cannon fodder on the Eastern Front.

Regardless of the historical truth, extreme nationalists were quick to exploit the new opportunities in the East. Waffen-SS veterans from Germany and the rest of Western Europe were invited to Eastern Europe to take part in celebrations otherwise banned in their home counties.

Hungary publicly acknowledged the Waffen-SS in its annual ‘Day of Honor’ celebrations, first held in 1997, which commemorated the siege of Budapest in 1944-45. In something of a festival atmosphere – complete with flying flags, martial music and the laying of wreaths – veterans from the Waffen-SS marched alongside those of the German Wehrmacht and the Hungarian Army, to the applause of an appreciative audience of nationalist and neo-Nazi groups.

Latvia and Estonia were also prominent in welcoming Waffen-SS veterans from across Europe, who in turn donated relief supplies and money to their hosts. Support for the Waffen-SS was somewhat more controversial in the Baltic states, however, with its large minority populations of Russian-speaking citizens opposing the erection of memorials glorifying SS soldiers as freedom fighters. Despite this, Narva in Estonia became a key site of commemoration, the former battleground where Waffen-SS units from the Baltic states, Germany and Western Europe had fought together in defense of the city in 1944.

The break-up of the Soviet Union in 1991 led to the formation of Ukraine as an independent state. During World War II the Waffen-SS had raised a Ukrainian division to fight on the Eastern Front. After independence its veterans found themselves transformed from fascist collaborators into heroes in the struggle for nationhood. The once neglected gravestones of former soldiers were tended by volunteers and the division’s distinctive lion insignia was publicly displayed by young Ukrainians. In the ensuing conflict between Russia and Ukraine, the link between the Waffen-SS and present-day Ukrainian paramilitary forces became apparent. The infamous Azov Battalion openly espoused anti-semitic, white supremacist attitudes and adopted the Wolfsangel insignia worn by several Waffen-SS divisions.

In 21st century Europe, pressures from mass migration, the negative aspects of globalization and the rise of populist political parties emboldened extreme nationalists. The influx of migrants from Africa and the Middle East encouraged them to take their lead from Waffen-SS mythology and define themselves as defenders of Europe from outside threat. At a Waffen-SS commemoration in Estonia in 2005, a Swedish neo-Nazi described his meeting with a tall Belgian veteran: ‘I am so eager standing over here with this two-meter man. He asks me, for the sake of their honor, to free Sweden from the foreign occupiers and explains that we Aryans will die if nothing happens.’ The fawning encounter, as described here, chillingly suggested that the work of the Waffen-SS was not yet complete and needed others to finish the task. Racially motivated attacks on migrants have become increasingly commonplace.

More mainstream nationalist political parties such as Jobbik in Hungary and AfD in Germany have enjoyed some success in recent elections, and while they publicly disown association with neo-Nazi groups a close relationship exists between them. Thus, the neo-Nazi Hungarian Guard – modelled on the Nazi-sponsored Arrow Cross Party – acts as a shadowy para-military force on behalf of Jobbik. This resurgence of extreme nationalism demonstrates the enduring influence of National Socialism, including that of the Waffen-SS. It is a legacy Europe could well do without.