by Evan A. Kutzler

Evan A. Kutzler is assistant professor of history at Georgia Southwestern State University. He is author of Living by Inches: The Smells, Sounds, Tastes, and Feeling of Captivity in Civil War Prisons (Chapel Hill: University of North Carolina Press, forthcoming 2019) and co-editor with Timothy J. Williams of Prison Pens: Gender, Memory, and Imprisonment in the Writings of Mollie Scollay and Wash Nelson, 1863-1866 (Athens: University of Georgia Press, 2018). 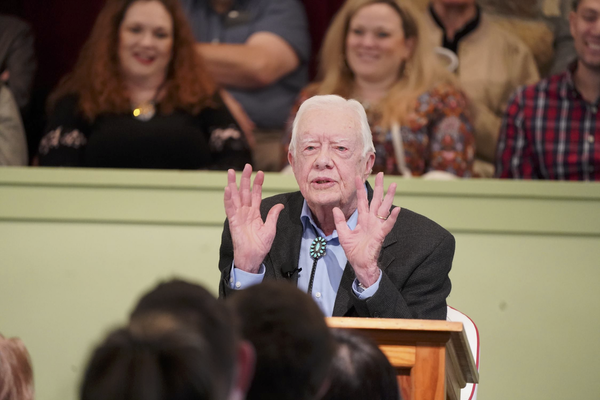 Those who have attended Jimmy Carter's Sunday School know that the time between arrival and 10:00 a.m.—measured in hours—is not really empty. A church member, often Jana Carter or Jill Stuckey, orients visitors, goes through a list of do's and don'ts, and provides short history lessons along the way. It is a presentation that church members have perfected over the years and the orientation is interactive and lively. "What have the Carters been doing in retirement?" Jill asks the audience. It is a loaded question. "Habitat!" or "Building houses!" is the most common first response. "Yes, the Carters build houses one week a year," Jill responds, smiling through gritted teeth. "How about the other fifty-one weeks?" Soon a more comprehensive accounting emerges: helping to ensure fair elections; eradicating Dracunculiasis or "guinea worm"; writing books; staying in shape; hunting and fishing. One avocation, though quite successful, is never mentioned: Jimmy and Rosalynn Carter are practicing public historians.

Jimmy who? A public what? The work that the Carters do at the local level meets the National Council on Public History's inclusive definition of the field: "public history describes the many and diverse ways in which history is put to work in the world." Consider, for instance, Sunday school itself. The history lesson begins before President Carter arrives and continues after he enters. Political Scientist Jason Berggren writes that Sunday school at Maranatha Baptist Church in Plains, Georgia, serves "as a press conference of sorts" and "an occasion for presidential apologetics – an ongoing defense and explanation of his presidency."(1) The setting also makes it a form of wide-ranging historic site interpretation that includes Carter's upbringing, his years in the White House, his post-presidency and— last but key to it all—his deep, compelling faith.

Sunday school at Maranatha is not a political rally, but it has a secular significance as public history. Guests often come from around the world to connect with the past—a need that drives much of the public history world from heritage tourism to reenactments. President Carter serves as both historical subject and docent in these moments. "Where are you from?" he asks the audience. When someone says, "Washington State," Carter responds, "The best nuclear-powered submarine in the world is stationed there. I'll let you guess the name." Carter is referring to a ship that bears his name—a subtle reminder of his history with the U.S. Navy. At the end of Sunday school, Carter shifts fully into public historian mode, shaping the way he wants people to remember him. "I used to say I'd be happy to take photographs with you after church," he jokes with a smile. "Now, I'm willingto do them." Or, with a smaller smile, he apologizes about his waning mobility. "My doctor tells me I have to sit during photographs. Please don't take my sitting to mean that I think I'm better than you." 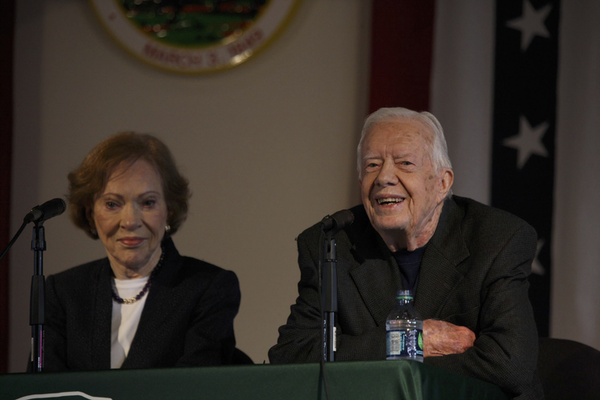 Jimmy Carter continues to shape his historical legacy in others ways. Indeed, to visit Plains High School, the railroad depot that served as a presidential campaign headquarters, or the Boyhood Farm is to take a guided tour led by public historian Jimmy Carter. Although Carter has written more than thirty books, his favorite to write was An Hour before Daylight: Memoirs of a Rural Boyhood (2001). Published just as his boyhood farm opened to visitors, this book has shaped interpretation at the Jimmy Carter National Historic Site more than any other. In fact, it would be difficult to overemphasize the impact of the book at the farm. According to historian Zachary Lechner, "Carter's perspective—very much in evidence throughout the site's interpretation—is omnipresent at the farm."(2) From Jimmy Carter voiceovers to written excerpts, the boyhood farm is nearly as immersive an experience as Maranatha. There are few autobiographical landscapes quite like it.

Both Jimmy and Rosalynn Carter also remain active members of the public history community, including the Plains Better Hometown Program and the Friends of Jimmy Carter National Historic Site. In December 2016, one year after President Carter beat cancer, the Better Hometown Program held a Christmas Party in the Matthew Rylander House. Better known locally as "the haunted house," the (ca. 1850) plantation house was rented by the Carter family between 1956 and 1961. Although now vacant, it is owned by the Better Hometown Program, and the Carters led the way in stabilizing the building. The night of the party, with a torrential storm outside and only Christmas lights inside, the Carters went to each table after dinner, describing what used to be here or there and pointing out "hidden" rooms between first-floor closets and an attic. The family thought these nooks were the source of house's haunting. The Carters also make recurring cameo appearances in a "whodunit" murder mystery series organized by Kim Fuller, Director of the Friends of Jimmy Carter NHS. The popular event is held on the SAM Shortline, an excursion train between Cordele and Plains that the Carters lobbied to bring here in 2000.

As board members of the Friends, the Carters play key roles from interpretive work to fundraising. Rosalynn Carter recently led the way in putting Plains on Georgia's Camellia Trial. In 2016, the National Park Service made President Carter an honorary park ranger and the Carters have given special programs on President's Day for years. Together, they have helped the Friends group raise millions of dollars for the park. This fundraising has enabled the organization to hire a full-time education specialist who creates museum lesson plans and coordinates field trips. In some ways, the Carters have created a living history museum of 20th Century rural America in Plains with a twist: the global perspective of a former president and first lady.

Orientation before Sunday school at Maranatha makes it clear that Jimmy Carter still thinks carefully about official and ceremonial titles. He does not like to be referred to as "Mr. President," an orientation leader explains, "because there is only one 'Mr. President' at a time, and that is the person who occupies the Oval Office." So be it. Indeed, we ought to respect President Carter’s wish that we not confine him too much to his time as chief executive. So address him as President Carter, or describe him by one of his less formal titles and roles: Sunday school teacher, public health leader, navy veteran, compassionate Christian, and a friend to strangers. And to these sobriquets, each more descriptive than “Mr. President,” we should include Jimmy Carter, public historian. 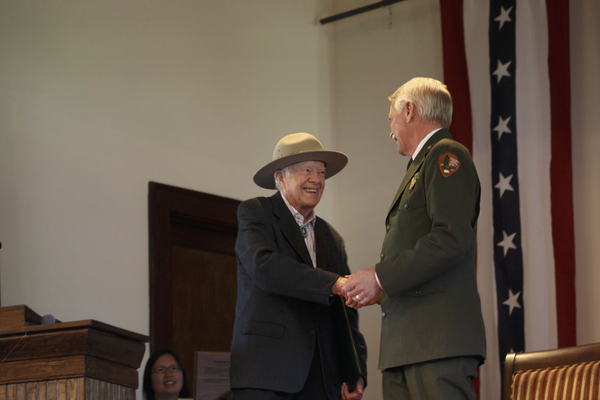