Wen-Qing Ngoei is assistant professor of history at the Nanyang Technological University, Singapore. He completed his PhD in U.S. foreign relations at Northwestern University and did postdoctoral stints at Northwestern and Yale University. Ngoei’s book, Arc of Containment: Britain, the United States, and Anticommunism in Southeast Asia (Cornell University Press, 2019)examines how British decolonization intertwined with Southeast Asian anticommunism to shape U.S. policy in the wider region. He has published in Diplomatic History (2017) and his prize-winning essayon the domino theory appears in the Journal of American-East Asian Relations (2014). For more information, visit his website. 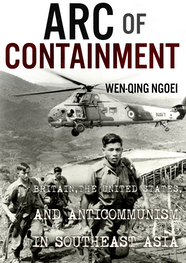 It is hard to ignore the escalating rivalry between the United States and China. The Sino-U.S. trade war hogs the headlines; China’s explicitambitions for hegemony in the Asia Pacific have induced the Trump administration to increase U.S. defense spending and strengthen its partnerships with Asian allies; and experts wrestle with the matter of China’s challenge to America’s longstanding hegemony in East and Southeast Asia, pondering the decline of U.S. influence.

But how did America rise to hegemony in East and Southeast Asia in the first place? The popular history of U.S. involvement in Asia after 1945 suggests that American predominance faded fast. By the 1950s, U.S. military supremacy had been punctured in Korea. Instead, Chinese forces proved formidable, driving the U.S.-led coalition deep into South Korea, prompting General Douglas MacArthur’s desperate (and unheeded) call for Washington to use atomic weapons on China. Further humiliation would greet America’s military in Vietnam. Richard Nixon’s rapprochement with China in the early 1970s seems an effort to slow America’s waning paramountcy in world affairs.

If America suffered mostly embarrassment and defeat in Asia, how could U.S. hegemony have emerged in the region? Commentators have rarely addressed this question, stating simply that America enjoyed a “surprisingly advantageous” position in Southeast Asia despite failing in Vietnam.

My book, Arc of Containment: Britain, the United States, and Anticommunism in Southeast Asia (Cornell UP), examines the under-studied rise of U.S. hegemony in Southeast Asia during the Cold War and its impact on wider Asia. It shows that after 1945, Southeast Asia entered a period of Anglo-American predominance that ultimately transitioned into U.S. hegemony from the mid-1960s onward. Vietnam was an exception to the broader region’s pro-U.S. trajectory.

British neocolonial strategies in Malaya and Singapore were critical to these developments. Whereas Vietnamese and Indonesian revolutionaries expelled the French and Dutch, Britain collaborated with local conservatives in Malaya and Singapore, steering them toward lasting alignment with the West. Drawing from Britain’s repertoire of imperial policing and counterinsurgency, British and Malayan forces decimated the guerrillas of the Malayan Communist Party while Singapore’s anticommunists eliminated their leftist opponents. Beyond Malaya and Singapore, Thailand had already turned toward America (to resist Chinese influence) and the U.S.-friendly Philippines played host to massive American military installations. By the early 1960s, therefore, a fair portion of Southeast Asia had come under Anglo-American predominance.

The rise of Malaysia would strengthen the Anglo-American position. In 1963, when Singapore moved toward federating with Malaya and Britain’s Borneo territories (Sabah and Sarawak) to create Malaysia, President John Kennedy declared Malaysia the region’s “the best hope for security.” After all, Kennedy officials had envisioned that forming Malaysia would complete a “wide anti-communist arc” that linked Thailand to the Philippine archipelago, “enclosing the entire South China Sea.”

But Malaysia did not enjoy universal acclaim. President Sukarno’s left-leaning regime in Jakarta and his main backers, the pro-China Indonesian Communist Party (PKI), deemed Malaysia a British “neocolonial plot” to encircle Indonesia. Sukarno had fair grounds for his accusation. Malaya had, soon after independence in 1957, aided Britain and America’s botched attempt to topple Sukarno. Moreover, British military bases in Singapore had supported this effort and were set to remain under London’s control for the foreseeable future. Sukarno’s answer was Konfrontasi(confrontation), a campaign to break Malaysia up. His belligerence would bring his downfall and usher Indonesia into America’s orbit.

Malaysian officials responded to Konfrontasi by launching a charm offensive into the Afro-Asian world that diplomatically isolated Indonesia while British troops secretly raided Indonesian Borneo to keep Indonesia’s military on the defensive. These moves worked well. In 1964, Afro-Asian delegates the annual non-aligned conference condemned Konfrontasi; in January 1965, the UN Security Council accepted Malaysia as a non-permanent member, legitimizing the federation and undermining Sukarno’s international influence. Equally, Konfrontasi severely destabilized Indonesia’s economy and battered its armed forces. Now, conservative elements of the Indonesian Army, which America had courted and equipped since the late 1950s, prepared to execute a coup d’etat. When a few elites of the PKI attempted in October 1965 to preserve Sukarno’s authority, Major General Suharto led the Army’s right-wingers to seize power, alleged the PKI and its Chinese patron intended to subvert Indonesia, and massacred the PKI (Sukarno’s power base) in a bloody purge. The Suharto government then tilted Indonesia—the world’s fifth largest nation—toward Washington and broke diplomatic relations with China.

Ironically, President Lyndon Johnson Americanized the Vietnam conflict that same year—supposedly to rescue Southeast Asia from communism—when most of the region’s resources and peoples already resided under pro-West regimes opposed to Chinese expansionism.

Southeast Asia began transitioning from Anglo-American predominance to U.S. hegemony at much the same time. Konfrontasihad so taxed Britain’s economy that British leaders (in opposition to Prime Minister Harold Wilson) insisted on a full military retreat from Malaysia and Singapore. As British power waned, Singapore and Malaysia entered America’s sphere of influence, throwing themselves into supporting the U.S. war in Vietnam. As America faltered in Vietnam, it also raced to consolidate its newly-acquired ascendancy in Southeast Asia, forging intimate ties with, and pumping economic and/or military aid into, Indonesia, Malaysia, the Philippines, Singapore and Thailand. These nations formed a geostrategic arc around the South China Sea.

Here, then, are the overlooked origins of U.S. hegemony in East and Southeast Asia.

For, by the late 1960s, the arc of containment had effectively confined the Vietnamese revolution and Chinese regional ambitions within Indochina, causing Premier Zhou Enlai to express frustration that China was “encircled” and increasingly “isolated” from regional and world affairs. In this light, Nixon’s rapprochement with China was undertaken not from a position of weakness but de facto hegemony in East and Southeast Asia. Indeed, Nixon found Chinese leaders eager to thaw relations with America. Even when the Indochinese states came under communist control in 1975, the arc of containment remained firm, its leaders keen to reinforce their ties with America.

It seems remiss to contemplate Sino-U.S. rivalry today without acknowledging this history of American hegemony in East and Southeast Asia, particularly the outsized role of regional actors. For while China has today mounted a profound challenge to America in Asia, during the Cold War America’s generous economic programs and overwhelming military power won little in Indochina. Rather, U.S. hegemony before, after, and during the Vietnam War was created by  anticommunists who chose to cast their lot with America against Chinese expansionism. In the days ahead, it is likely that the regional powers’ choices and actions will again determine how the Sino-U.S. rivalry plays out.