Aleisha Smith is an intern for the History News Network. 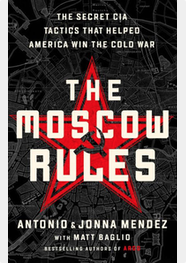 Jonna Mendez is a former Chief of Disguise with over twenty-five years of experience as a CIA officer working in Moscow and other sensitive areas. She is the coauthor with husband Tony Mendez of Spy Dust and her work has been featured in the Washington Post, WIRED, NPR, and other places. Her husband, Antonio (Tony) Mendez, perhaps best-known from his book-turned-film ARGO, was one of the most celebrated officers in CIA history. He, sadly, passed away in late January. THE MOSCOW RULES: Tactics That Helped America Win the Cold War is their last book together.

What was it like going from being “in disguise” as a CIA agent to the whole world knowing that you were once an operative? What as that transition like?

I worked for the CIA for 27 years. That whole time I was under cover, whether living in the US or overseas. The cover would vary to fit my circumstances. It usually revolved around other official US government entities. While my colleagues knew, of course, of my true affiliation, my social contacts did not. This would include some close friends over many years – who thought I worked a very boring job for the US government. Some members of my family knew, but none of my friends. When Tony and I came out publicly, it created a good deal of friction with friends I was close to, and in fact I lost several friends who could not believe that I had deceived them over the years. That was painful. My foreign friends probably understood better than my American ones. It was also actually difficult to speak publicly at first. We were so inured to obfuscating that speaking the truth, about such a simple thing was hard.

What do you think your personal role is in history and what was it like writing about it?

Tony Mendez and I worked together for many years. After our marriage the duality continued. When we began speaking and writing about our work, we did it together. Of course, he was the catalyst for our being able to speak – when others could not. But we had done much of the same work and we had many similar experiences. I think his role in history is heroic, while my role will be helping to publicly un-demonize the CIA. We thought that our role was to personalize the CIA; to demonstrate that it was composed of normal Americans trying to do the best job possible for their country. An apolitical group of really excellent employees. It may sound simplistic, but I think that together we opened up the door to afford a peek inside – at the machinery of this government agency and the people who work there.

I also feel that I had a creative role to play in the Disguise arena. We were beginning to produce very advanced disguise systems, modeled after some we had seen in Hollywood, and they became necessary tools in the denied areas of the world, the hard-to-work-in places where surveillance would almost prevent you from working at all – like Moscow. We were constantly innovating and creating new tools to enable our case officer colleagues to work on the streets even though they were surrounded by surveillance.

Does the current political climate shape how you discuss your work as an author and as a former CIA agent?

The politics do not shape the discussion as much as the need for sensitivity to the information that is classified. The CIA maintains a fairly tight rein on its former employees, insisting on publication review of any written material and keeping a watchful eye on pubic discussions. It is not politics that limit what we say, but the need to protect sources and methods. I have always been glad to comply. I have no desire to divulge classified information. On the other hand, when the CIA has seemed heavy-handed, I have not hesitated to question their decisions. Neither Tony nor I have felt constrained by the CIA in what we say or write.

You were a clandestine photographer and are still an avid photographer. What are the similarities and differences between preserving history through photography and the written word?

I really do believe that a photo is worth a thousand words. When two people are caught in the act of passing classified information, when the license plate of the car is clear in the print, when the face of the traitor is captured on film, this is evidence that is incontrovertible. In fact, no words are necessary. The photo is proof. But I would never dismiss the written word, the analytical approach to solving the problem, the connecting of the dots. However, if you have a photograph of the minutes of the meeting, or the scene of the crime, you have proof positive. Historically you want to have both.

As a member of the Advisory Board for the International Spy Museum, can you speak on public history and the importance of sharing your knowledge with wide audiences?

I see this as the primary role of the museum, an opportunity to educate the public and to shine some light on an area that has typically been off limits – the world of espionage. The American public is fascinated by this covert world and seems always interested in the subject. Being a member of the Spy Museum gives me an opportunity to explain how it works, how the tools are used through expansive training programs, and what the work product might look like. We are an international museum, so approach these subjects with a wide-angle lens, so to speak. The museum connection offers a rare opportunity to connect with and educate the pubic at large.

There is a fascination of spy life that is often portrayed in the media, particularly in movies and television. Do you think this excitement is justified? Are there accurate portrayals?

It took me years to understand this fascination. I believe it is based in part on the pop culture image of the spy (Ian Fleming, Graham Green, John LeCarre), the also on the lure of the unknown, the secrecy surrounding all intelligence work.  There is a basic curiosity about the work, and an assumption about the glamour surrounding the work, that draws the public in. If they only knew that for every five minutes of excitement, there are hours and hours of mundane planning, meetings and administrative details. There are few portrayals that I have seen that seem real and that is why I really don’t watch much espionage-themed media. One exception was The Americans – a TV show that I believe thoroughly captured the ethos of the culture of the spy. The characters seemed real; the situations close to life, and the disguises were fabulous. BBC also did some nice productions of John LeCarre’s work.  And Jason Matthews’ recent novels have an ability to place me back on the snowy streets of Moscow with danger around each corner.

Yes, there are a number of historical events that revolved around the use of disguise and we have described some of them in our new book, The Moscow Rules. In a city where we could not meet face-to-face with our foreign agents, where the KGB surveillance was smothering our case officers, and where the use of tradecraft was the only thing that allowed our operations to take place, disguise was a tool that allowed operations to move forward. We used unique proprietary disguise techniques, derived from the make-up and magic communities in Hollywood, to protect our CIA officers and their Russian agents. These tools allowed the intelligence product to be delivered to American hands, resulting in a number of incredibly successful clandestine operations in the Belly of the Beast, the name we gave to Moscow. Failure in Moscow would result in the arrest and execution of our foreign assets. This was a life and death situation.

You also co-authored the book Spy Dust with your husband Tony Mendez. Why did this one seem important to write next?

Spy Dust was a natural follow-on to The Master of Disguise. We met with our editor after the publication of MOD over cocktails, and she asked about how we had met during our days in CIA. When she heard the story she basically commissioned the next book, Spy Dust. She thought the story would make a very interesting book. As it turned out, her publishing house was not the one that bought the manuscript. In fact, there was a heated discussion, once the manuscript was done, about whether our romance belonged in the middle of a spy story. We insisted that there was no book without that story, and so it stayed. It was difficult to write, as it involved the break-up of my marriage, but it was important to us, on several levels, to tell the story truthfully. And so we did.

Why should people read The Moscow’s Rules? What message do you hope they take away from it?

Many people feel that the Cold War is over and that we should move on with normalized relations with our old antagonists. The Moscow Rules opens with a late night scene at the gate of the American Embassy in Moscow. Set in June 2016, it details the savage beating of an American diplomat by the FSB, successor to the KGB, as he attempts to enter his own embassy. The beating continued into the embassy foyer, legally American soil. The American was medically evacuated the next day with broken bones. This was in 2016, in the middle of our most recent presidential campaign.

The FSB was exhibiting a consequence of The Moscow Rules; the heretofore unwritten but widely understood rules of conduct for American intelligence officers in Russia. My best guess was that the American had violated one of those rules: Don’t harass the opposition. The FSB is heavy-handed, as is Putin, a former intelligence officer.

The Moscow Rules were the necessary rules of the road when working in Moscow, the understood methods of conducting yourself and your intelligence operations that had proven themselves over the years. They were never before written down, but were widely understood by our officers. And they are dirt simple: Use your gut. Be nonthreatening. Build in opportunity but use it sparingly. Keep your options open. Use misdirection, illusion and deception. All good examples of The Rules.

What do you hope this book adds to the legacy of your husband, Tony Mendez, as well as your own?

The Moscow Rules is Tony’s fourth book and my second, third if you count my work on the book ARGO. Neither of us is looking for a legacy. Tony’s legacy is already well established; my goal lies more in the educational area. We always believed that our unique opportunity to speak for the CIA and to educate the public on the work that is done in their name was a chance to open the door to a myriad of career opportunities for young Americans who might never give the intelligence field a second thought. While I am not a traditional feminist, I can serve as an example of the continuing, on-going success of women in this field. And in our work with the International Spy Museum we have tried to further these same goals. Between the two of us, and in the books we have written, we have tried to further these goals.