Elisa Carbone is the award-winning author of Blood on the River: James Town 1607 (Viking, 2006) and Poison in the Colony: James Town 1622 (Viking, 2019). Before becoming a novelist, she taught in the Speech Communication department at the University of Maryland. She grew up in Virginia. www.elisacarbone.com 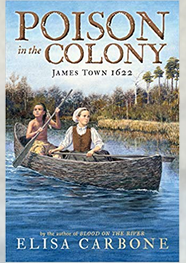 When I decided to write Poison in the Colony, a historical novel about the Jamestown colony, I was up against a problem. It was 2014 and young readers had made their desires clear: if a book didn’t contain a fantasy world, vampires, or at least a few wizards, they did not want to read it. I pondered how I might incorporate the other-worldly aspects that young readers wanted in a novel about real people and real historical events. I decided to blend in a believable and historically accurate bit of magical realism—my main character would have the gift of the “second sight,” i.e. strong intuitive powers.

I figured that a young person with a strong sense of intuition—she would know things she wasn’t supposed to know, she would have small peeks into the future—may well be accused of witchcraft. Even better, I thought. The plot thickens!

The fear of witches was at fever pitch in Britain in the early 1600’s and that fear had traveled across the ocean with the colonists. Witchcraft was condemned by the church and at the time church doctrine taught that witches had willingly entered into a pact with the devil. In Europe, between the years of 1500 and 1660 it is estimated that about 80,000 people were put to death for allegedly practicing witchcraft. Eight out of ten of these were women. Death was normally meted out through strangling and burning at the stake, beheading, or hanging.

I started to research the years the book would cover, 1613 to 1622, and the family of Anne Burras and John Laydon and their daughter Virginia. Virginia was to be my main character, blessed (or cursed) with the second sight. In my research, I stumbled upon two stories that both shocked me and let me know that I was on the right track.

Anne Burras and Jane Wright, a left-handed midwife, were assigned to make shirts for the colony. The thread they were provided turned out to be rotten, and so the shirts were not made properly. They were accused of stealing from the colony. This was during the period of Martial Law, known for brutal punishments. For this transgression the two women were whipped severely. Anne was pregnant at the time and miscarried. Were Anne and Jane purposely given bad thread? Were they framed for the crime of stealing from the colony? Midwives and left-handed people were vulnerable to accusations of being in consort with the devil. Did someone accuse these women of witchcraft and was this their punishment?

My research led me to another story: the first witch trial ever recorded in the New World. It happened in 1626 and took place in the Jamestown settlement in Virginia. The accused witch? This same Jane Wright. I felt as though my hunches, and my characterization of Virginia, may well be founded in historical reality.

Witch hunts in the New World began in Virginia, though Virginia’s alleged witches were imprisoned rather than executed. The first American witch executions occurred in Windsor, Connecticut in 1647 (46 accused, 11 executed). The mania reached a peak during the famous Salem, Massachusetts witch trials in 1692: over 200 people were accused, 150 were arrested, 20 were executed and another 4 died in jail awaiting trial.

These hapless women and men were accused of causing a variety of problems: storms that wrecked ships, the death of humans and livestock, illness, and crop failure. Some “witches” were even accused of entering people’s rooms at night in apparition form and biting, scratching, and/or trying to strangle them. Any unexplained difficulty or calamity, or, it seems, strange dreams, could be blamed on a witch.

Social class figured prominently in these matters, with those of high status more often having the authority and credibility to do the accusing, and the poor most often bearing the brunt of the accusations. Acting outside the norm in any way, even by simply being left handed, was suspect, as was knowing how to use herbs to heal, being a midwife, or, as a woman, being unmarried. Sometimes the alleged witch had quarreled with neighbors over land boundaries or given birth to a child out of wedlock. Often, men who were accused of sorcery were those who had tried to defend their wives or other female family members when they were accused.

There does seem to be some truth to the accusations that these “witches” correctly predicted events and deaths, making it appear as though there was something going on beyond the imaginations of the accusers. When Jane Wright was brought to trial, the court records state that she had correctly predicted the death of several colonists and used witchcraft to kill a newborn as well as destroy crops and livestock. Knowing when a death will happen and predicting it, and actually causing the death, are of course two very different things, but this conflation certainly contributed to the belief in sorcery.

In Poison in the Colony, I wrote about intuitive abilities that were passed down through women. Virginia’s grandmother, a character I invented, also had the gift of the second sight. She was convicted of sorcery, strangled and burned at the stake in England—all the more chilling for Virginia to know the specifics of what could befall her.

This belief that being in consort with the devil was passed down from mother to daughter has its roots in history. As part of the finger pointing in Salem, Massachusettes, the four-year-old daughter of Sarah Good, one of the accused witches, was also arrested and put into prison. The child lingered in prison for between six and eight months, and by the time she was released she was so traumatized that she was never able to take care of herself.

When her mother, Sarah Good, stood on the platform ready to be hung, the Reverend Nicolas Noyes urged her to confess to being a witch. Good replied, “You are a liar. I am no more a witch than you are a wizard, and if you take away my life God will give you blood to drink!”

In 1717 Reverend Nicolas Noyes died hemorrhaging internally, choking on his own blood.